Thomas Watson Sidwell opened Friends’ Select School (as Sidwell Friends was then known) in 1883 as an initiative in co-ed, urban day-school education. Sidwell, then 24 years old, had been a teacher at Baltimore Friends School, headed by the leading Quaker educator Eli Lamb. Lamb opened the way for Sidwell to begin a school in Washington by sponsoring authorization of the venture within the Baltimore Yearly Meeting. While the Alexandria Monthly and Baltimore Yearly Meetings offered some nominal assistance, the operation was a proprietary one from the beginning.

Sidwell’s school began with 18 students in rooms that were part of the Friends Meeting House located in the 1800 block of I Street NW. Just 20 years after Friends’ Select opened its doors, Sidwell’s School—with fully elaborated primary, intermediate, and high school departments—enrolled nearly 200 students. Several buildings, including one of the first gymnasiums to be built in Washington, were eventually added to the I Street campus. 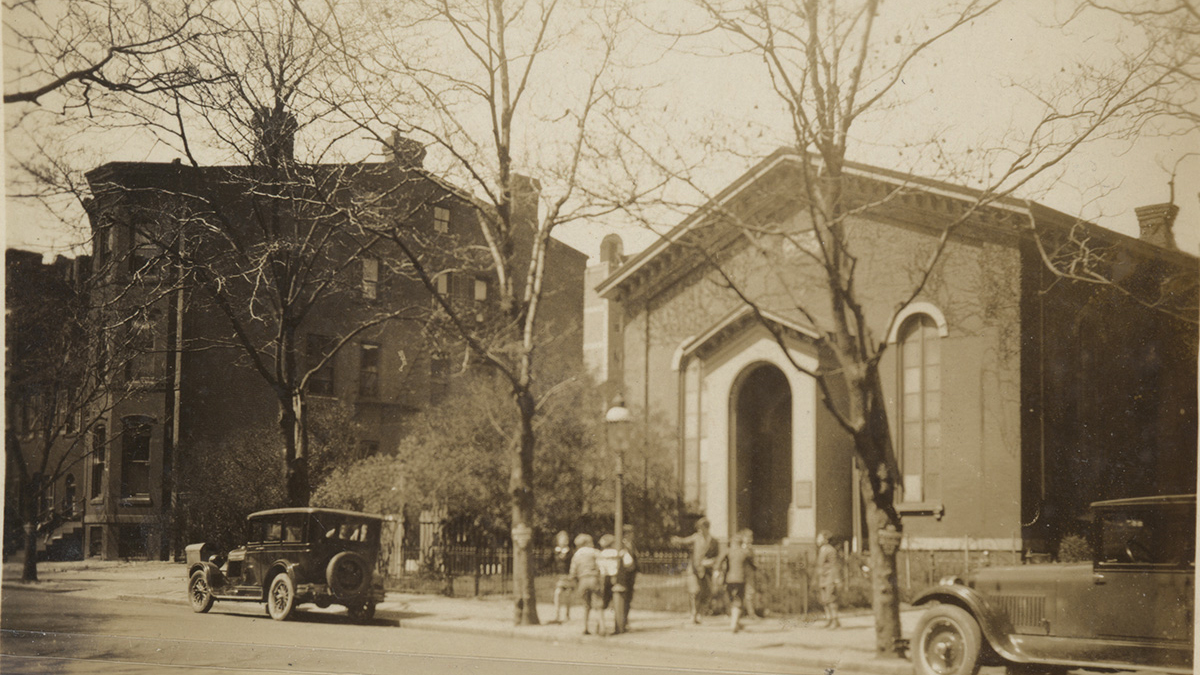 The original campus on Eye Street, circa 1930s 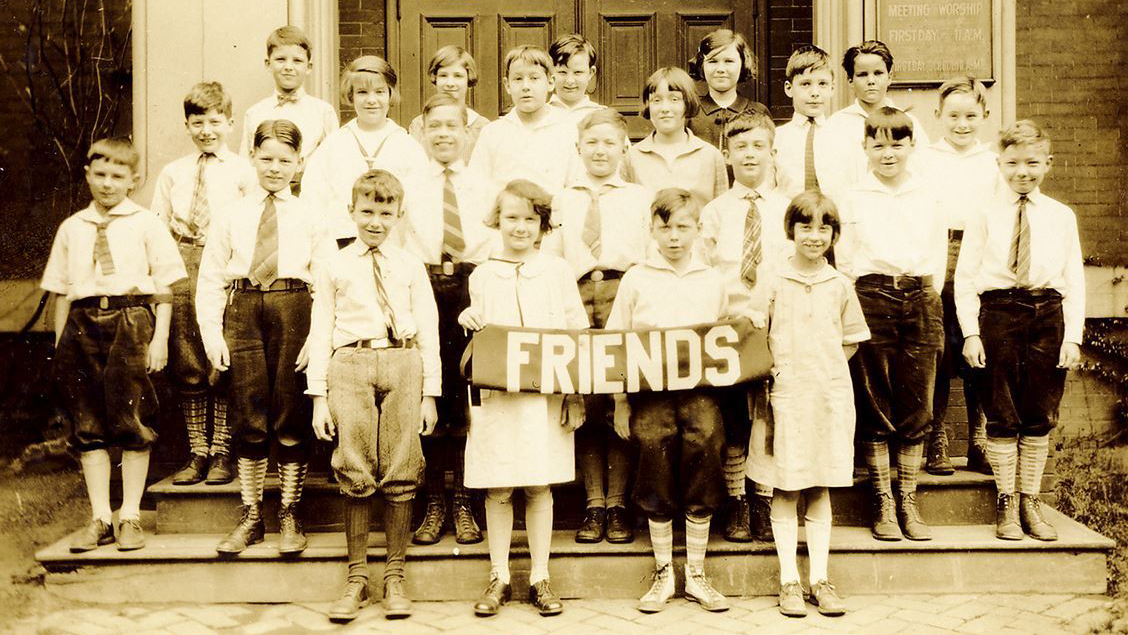 For many decades, the School was simply known as "Friends."

During the 1885-86 school year, Frances Haldeman, a recent Vassar graduate, joined the growing faculty as a Greek, English, and history teacher. Sidwell married Haldeman in 1887 and also made her co-principal. The Sidwells continued to share the leadership of the School for the rest of their lives.

In 1906, the institution that Thomas Sidwell had presided over for 23 years began a series of name changes. Friends School, or simply Friends, came into currency over Friends’ Select. Later, it became known as Sidwells’ Friends School, the plural possessive emphasizing the co-principals’ joint interests.

The Sidwells embarked on a plan to transform the institution from an urban to a suburban school. In 1911, they purchased a Dutch colonial house and grounds at 3901 Wisconsin Avenue NW from the Washington School for Boys. While the property first served as the Sidwells’ private residence, it soon became the site of the I Street students’ athletic and recreational activities. 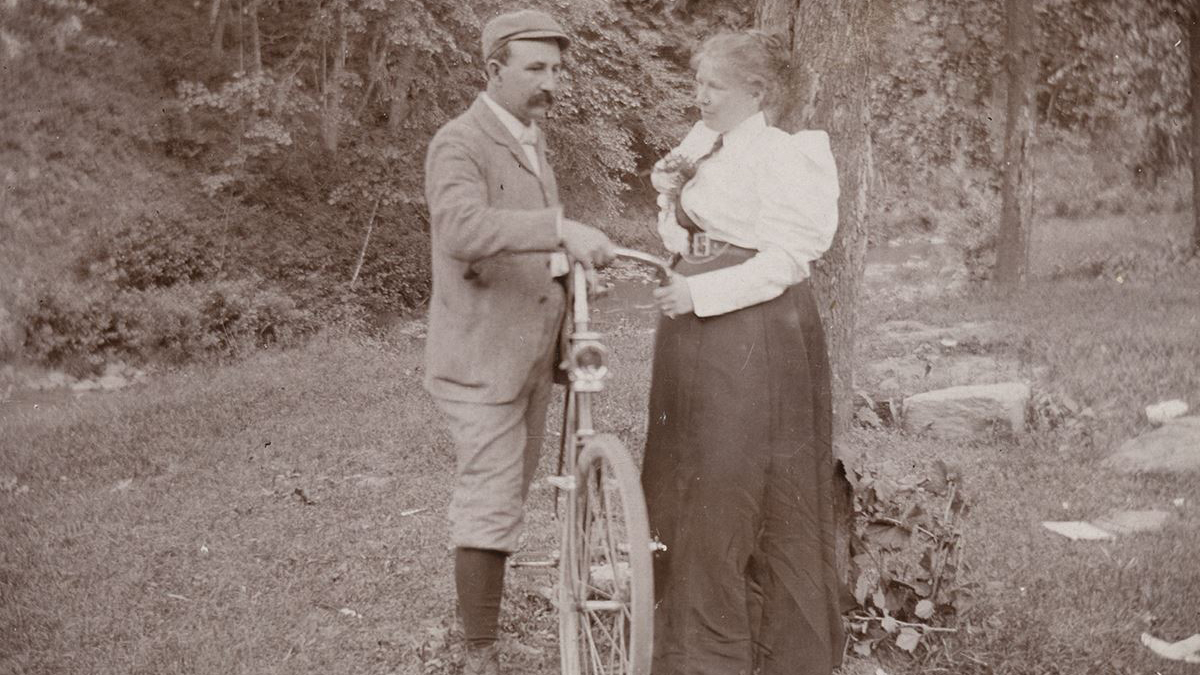 Thomas Sidwell and his wife, Frances Haldeman-Sidwell, operated the School together as co-principals for almost 50 years. 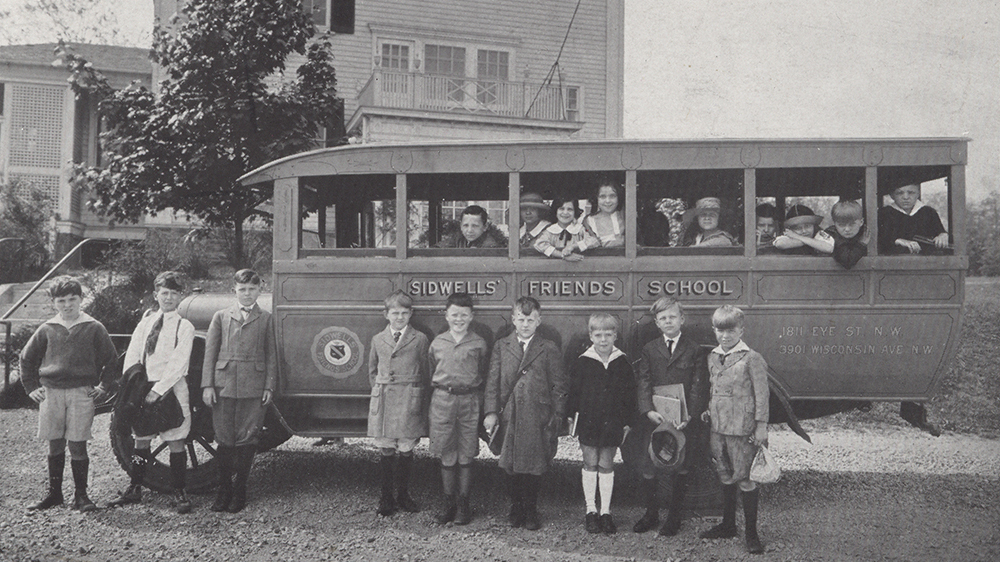 Students were bused to the Suburban Campus on Wisconsin Avenue for afternoon recreation.

By the mid-1920s, the Wisconsin Avenue campus was no longer used exclusively for recreation and sports. A new building called the Suburban School (housing primary grades) was constructed from timbers allegedly taken from Woodrow Wilson’s inaugural viewing stand. Other portions of the Friends School academic program also relocated from I Street to Wisconsin Avenue.

Frances Haldeman-Sidwell’s death in 1934 convinced Thomas Sidwell of the need to take action to secure the future of the School. With the 1934-35 school year, the Sidwell Friends School was incorporated as a nonprofit institution under a Board of Trustees. The board’s bylaws stipulated that a majority of its members must belong to the Religious Society of Friends. In addition, Sidwell named in his will a group of 24 veteran teachers, two grounds managers, and 11 servants among whom the value of the School’s property was to be divided if the School should fail. Despite the tough times of the Great Depression, the School survived.

When Sidwell died in 1936, the institution he had founded 53 years earlier was ready to be guided by the trustees and Headmaster Albert E. Rogers. Within two years, the I Street campus was sold to Doctors Hospital, and all operations were consolidated on Wisconsin Avenue. 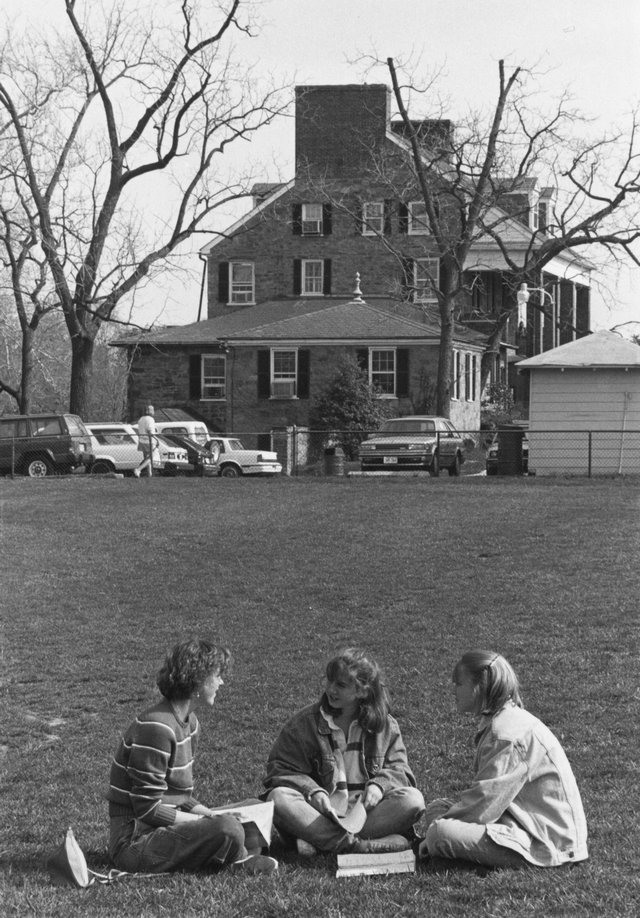 Sidwell Friends benefited greatly from the District of Columbia’s dynamic growth during World War II. At that time, the School pioneered the development of a fifth- through eighth-grade Middle School that was among the first in the country. The School’s first building campaign led to the construction of a separate Middle School building in 1950. In 1955, the School sold playing fields on the west side of Wisconsin Avenue (where McLean Gardens, Fannie Mae, and 4000 Wisconsin now stand) to finance the purchase of an adjacent historic structure known as The Highlands. This building, constructed between 1817 and 1827, was soon renamed Zartman House in honor of Helen Zartman, a key aide to Thomas Sidwell.

Sidwell Friends continued to grow in the 1960s. The School purchased the Longfellow School for Boys in Bethesda, Maryland, and moved its primary grades to that location on Edgemoor Lane in time for the 1963-64 school year. The purchase of the Edgemoor Lane property for the Lower School was directly connected to the demolition of the Sidwells’s Dutch colonial, which was then being used for high school classes. To make room for the construction of a new, modern high school facility, the old Suburban School was razed and its primary age students moved to Bethesda. The Upper School building opened during the 1964-65 academic year.

In 2006, renovations and additions to the shell of the original 1950 Middle School signaled the beginning of an era of green architecture at Sidwell Friends. The newly renovated structure became the first LEED Platinum K–12 school building in the world because of its innovative green technologies. A LEED Gold Athletic Center opened in 2010, and a LEED Platinum Meeting House and Arts Center opened in 2011. Learn more about our green buildings.

In 2017, the School purchased the adjoining property towards the north side of campus, property formerly known as The Washington Home which added six more acres and brought the campus boundary to Upton Street. An irrefutable opportunity to unify the campus and eventually move the Lower School back to DC, the School is making plans for the future home of a renovated Upper School in the new building, slated to be opened for the 2026-27 school year.

Learning from History, Moving Towards Equity and Inclusion

Today, Sidwell Friends is among one of the most diverse independent schools in the country. In the 2019-20 academic year, 53 percent of Sidwell Friends students identified as people of color. Yet despite the efforts that the School has made over the decades to diversify the student, faculty, and staff, the School did not create an integrated learning environment until there was significant pressure to do so.

Despite receiving applications from African Americans throughout the late 1940s and 1950s, the Board clung to an admissions policy that excluded applicants on the basis of race; this was increasingly challenged by Friends, students, faculty, and the Brown v. Board of Education of Topeka decision (1954). In 1956, the School enrolled Jeffrey Mazique, an African American student, in kindergarten and began a slow process of admitting black students across all grade levels. The first five black graduates were awarded diplomas in 1967. More about the history of integration and admissions at the School can be found in the following chapters of: Mr. Sidwell’s School:  A Centennial History, 1883-1983 (1983) by William R. ’51and Mary Anne McKaye ’51, and The Long Conversation: 125 Years of Sidwell Friends School, 1883-2008 (2008) by James Zug.

The history of the property on which the School sits is inextricably intertwined with that of the city and the nation—all of which carry the weight of the deep legacy of institutional slavery. The School, which was founded eighteen years after the 13th Amendment abolished slavery, did not directly benefit from the sale of human beings. Zartman House, formerly known as The Highlands, was financed in 1827 by Joseph Nourse (1754-1841), register of the U.S. Treasury under six U.S. presidents, beginning with George Washington. In addition to The Highlands, Joseph Nourse’s property included the current grounds of the National Cathedral. Research uncovered by Sidwell Friends alumnus Mark Auslander ’79 indicates that at least seven enslaved people lived and worked on the property in the early 19th century when it was owned by the Nourse family. There is evidence that some of the enslaved people were freed before the Civil War and continued to work at the house or on the grounds as caretakers and servants for decades. By the time the School purchased the property in 1955, many of the descendants had moved away to other areas of the city and around the country.

As noted in The Long Conversation, Thomas Sidwell’s father, Reuben Sidwell, attended the Maryland slaveholders convention in June 1859, a month after Thomas’s birth. Born a Quaker in Pennsylvania, Reuben started his medical practice in Johnsville, Maryland, in 1846 and married Sarah Ann Smith. Neither Reuben nor Sarah appear in the slave registers of the 1850 or 1860 census, which chronicle the names of slaveholders and provide nameless inventories of the enslaved. Henrietta Hill, a 14-year-old black girl, resided with Reuben’s family in 1850. A decade later Sarah Curry, a 22-year-old black woman, was employed as a “servant.” Census takers recorded both Hill and Curry as “free inhabitants.”

Today, Sidwell Friends is a different institution that honors the diversity of its community, which is essential to the educational mission as outlined in the Philosophy and Diversity Statements. Continuing efforts to recruit and retain a diverse leadership team, faculty, and staff remain a top priority. The School continues to evolve its curriculum to teach the history and impact of slavery and has offered these additional resources to its community. To learn more about ongoing research being conducted by Mark Auslander ’79 on enslaved persons at The Highlands and other properties owned by members of the Nourse family, read “In Bondage on the Heights: Enslaved Persons on Mt. St. Albans and The Highlands, c. 1817-1862” and “Traveling Together: Slavery, Landscape, and Historical Imagination.” 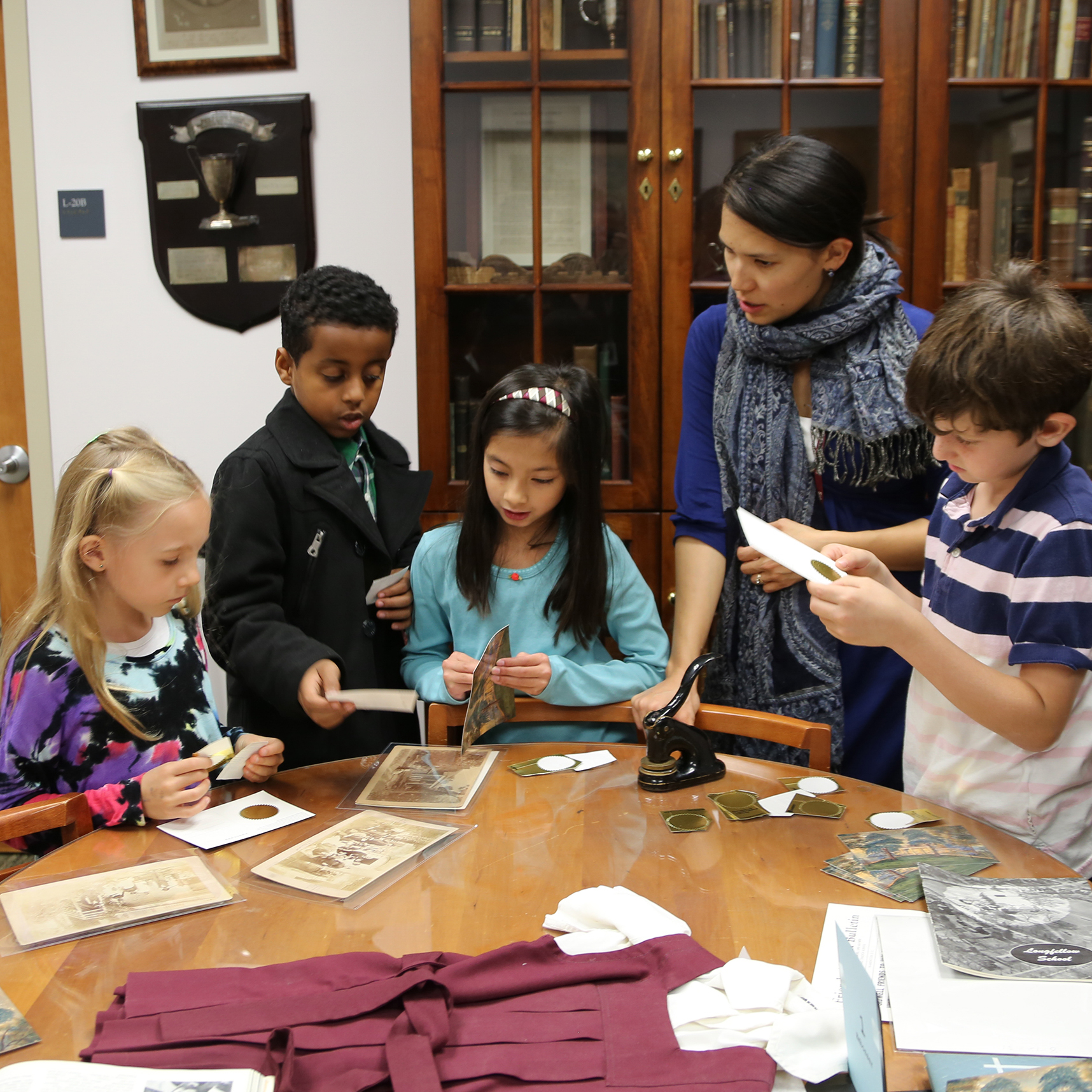 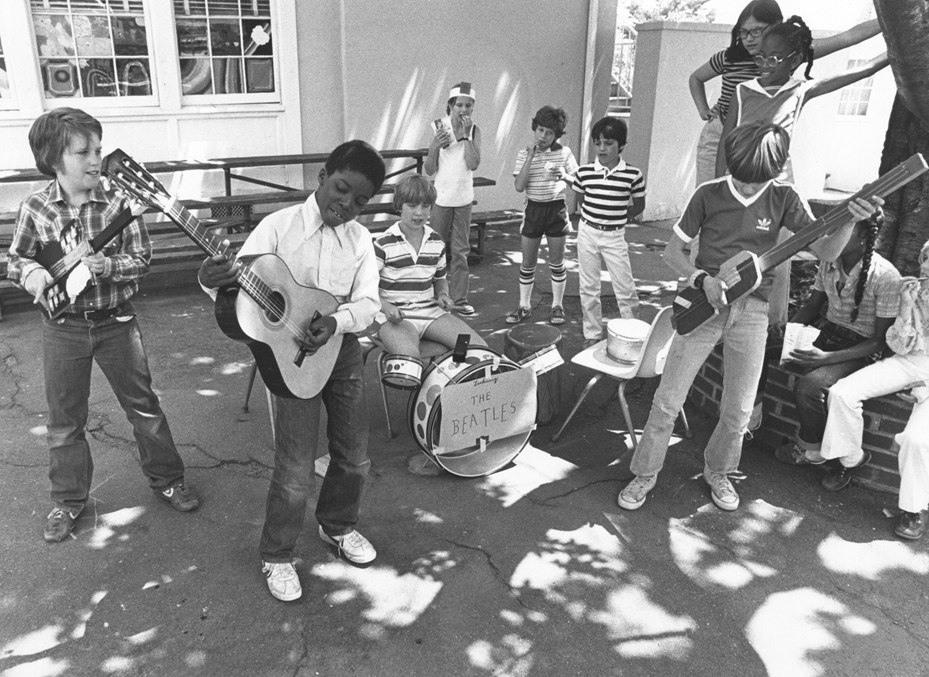