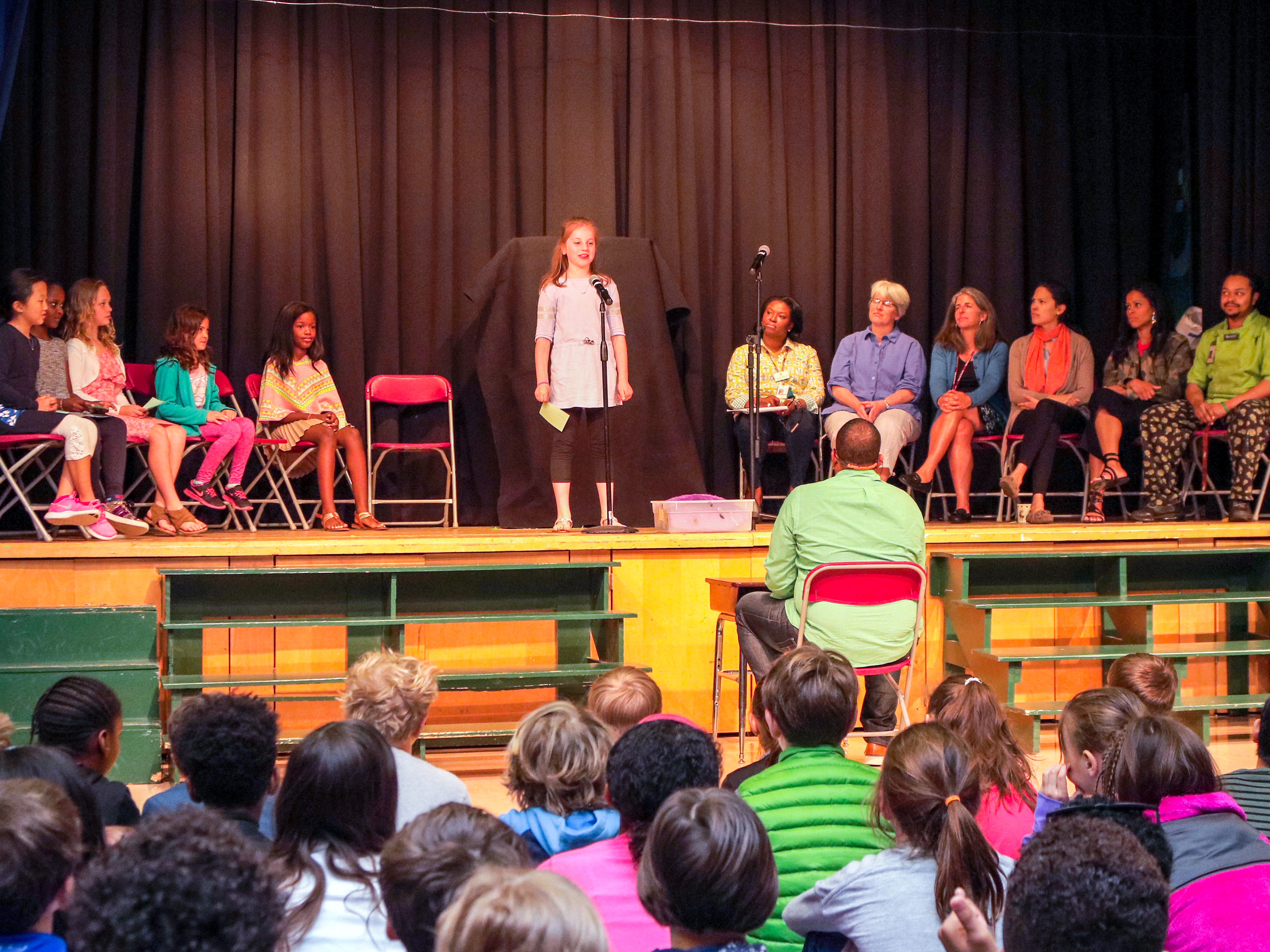 Lower Schoolers debated faculty about getting a toaster for the lunchroom, armed with well-researched rebuttals for any objections that might pop up.

In the age-old battle between refrigerated bread and cold pats of butter, butter beats bread every time, tearing over the surface and reducing the slice to crumbles with each swipe of the knife. This immutable law of kitchen physics irks Lower School students, a particularly bread-friendly group if ever there was one. They commiserate about it with each other in the lunchroom: If only we had a toaster to heat the bread!

When the topic came up one day during SPARC (Special Programs After Regular Classes), students asked faculty member Debario Fleming to pass along their request for a toaster to Principal Shereen Beydoun. She, in turn, passed along a list of concerns about the combination of young children and an electrical appliance with barely concealed heating elements.

Debario realized that the issue would make a great topic not only for the next round of debate club, which he coached during SPARC, but for an actual debate with Shereen and a panel of teachers—possibly in front of an audience of other students, teachers, and parents. With Shereen’s permission, he shared her list of objections and asked the debaters if they would be willing to research and present rebuttals, which would require them to use problem-solving, collaboration, math, and other skills. But there was one big caveat: “Having this debate doesn’t mean we’ll get a toaster!” Debario stressed. Students were undeterred and attacked the debate question—Should we have toasted bread during lunch or not?—with “vigor, energy, and enthusiasm,” he said.

Last week, after months of preparation, 18 pumped-up members of the debate team filed into a multipurpose room filled with several classes of Lower Schoolers and more than a dozen parents. As the team filled a set of bleachers next to the audience, a panel of Lower School representatives including Shereen, Lower School nurse Camille Wheeler, science teacher Sam Francis, 3Y teacher Elizabeth Bacon, and chef Andre Spurgeon took to the stage. Debario moderated.

The format, Debario announced, would not be a true debate. Five students at a time would face the adults and field their questions, but students would not be challenged on their answers.

For the next hour, four areas of concern were in the spotlight: safety (the biggie), cost, logistics, and gluten allergies.

One student opened the session by explaining how essential the bread bar is to students. “Sometimes people don’t like the food that’s served that day,” she said, with an apologetic look at Andre. “Not that it’s bad! People have different opinions. I don’t like vegetables, so I go to the bread bar. We believe that in a situation like this, having a toaster would get more kids to eat.”

Her teammate invoked the idea of parity (to parent hilarity) when he said, “I just have to point out the obvious: Teachers have food warmers.”

Another student struck an objective note when he revealed the results of a survey the debaters had conducted on the toaster proposal. Out of 40 4th graders polled, only eight said they didn’t want one.

A fourth student triggered the “tah-dah!” moment when he unveiled the star of the show: a giant poster of the Belleco JT1 S480, a commercial-grade toasting unit. Students chose this model after researching various products and even calling the company to discuss its merits. Faris pointed out that because this machine toasts multiple pieces of bread on a conveyor belt (which then deposits the toast on a tray rather than forcing the user to pluck the bread out, as with a traditional, pop-up toaster), it scores points for safety and logistics (faster toasting means less crowding at the machine).

As faculty grilled, students parried. How will you keep students in PK and kindergarten safe? (Only 3rd and 4th graders will have toaster privileges.) Who will monitor the toasting? (A “bread boss” will be in charge at each table.) How will county sanitation regulations be followed to keep dirty hands from touching the bread? (A “toast grabber” will use tongs.) How will county code be met to ensure that the toaster has a dedicated electrical outlet, when the existing ones are already in use? (There is a nonfunctioning outlet on a nearby wall panel, and a “mechanical guy” who works with the School can “make that outlet live.”) How will you account for children with allergies to gluten? (The few who are allergic can toast their own gluten-free bread. And one girl who lives gluten-free said she doesn’t have to have toast, if that helps simplify matters.) How will you pay for this toaster? (Raising $1,500—$5 from 300 students—through fundraisers such as car washes, bake sales, and book sales could purchase two $480 Belleco units, with $540 left over for repairs.) How will you pay for the extra electricity the toaster will use? (This model is eco-friendly; in addition, said one debater, “You know how we have so many printers and laminators? We don’t need that many!”)

The verdict is not in

Shereen brought the debate to a close with a sympathetic nod to the cause. “I love toasted bread,” she said. “Of course, we would love a toaster. But we have to look at everything that can go wrong. … The adults on campus are here to keep you safe. If you get burned for a reason that could have been avoided, your parents could be very upset.”

While she wouldn’t be approving or denying the request right then, Shereen did offer a timetable for a verdict. “This will be discussed over the summer, so check back [for an answer] in the fall,” she said.