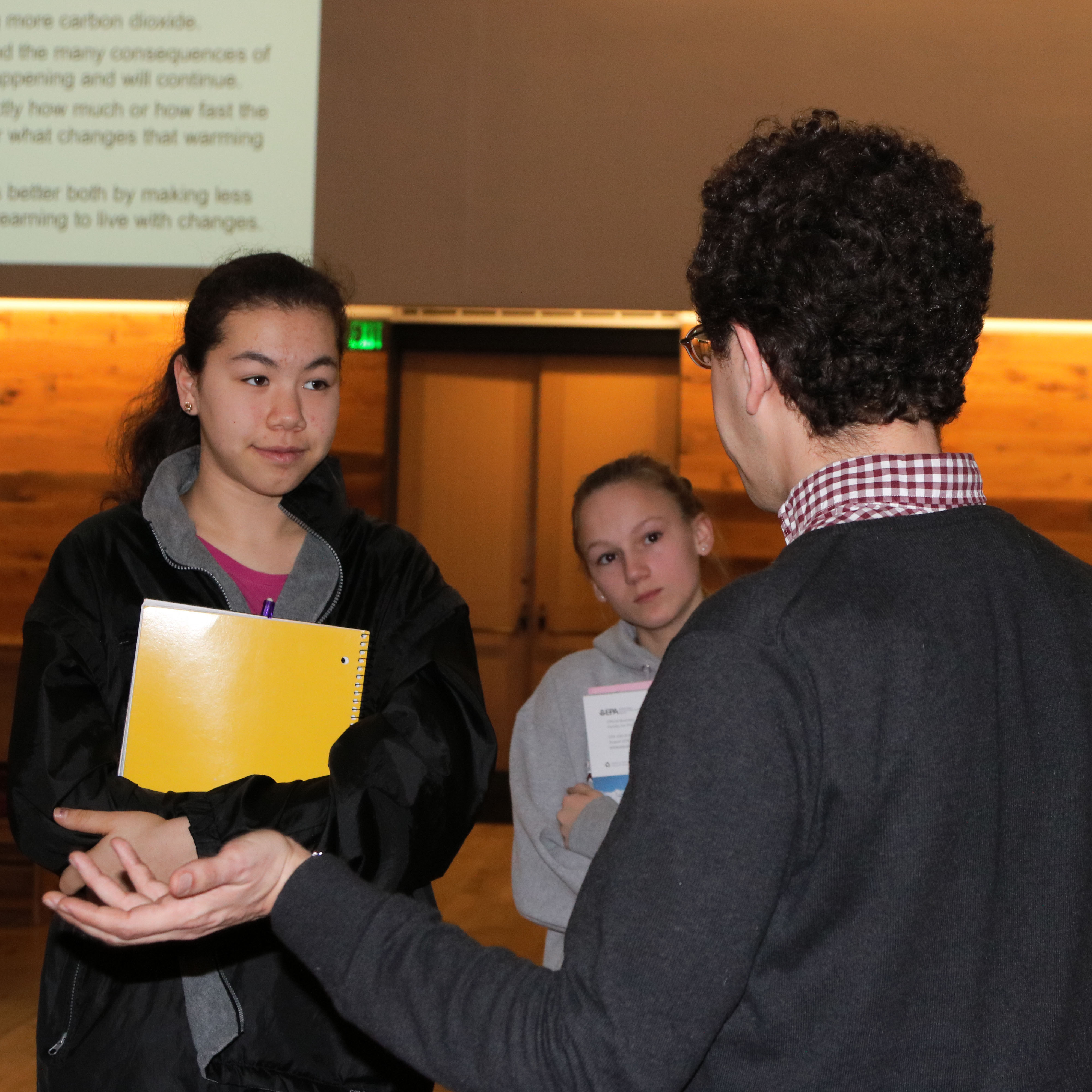 In the midst of a winter so warm that even the penguins at the National Zoo are likely confused, Marcus Sarofim, a scientist with the Environmental Protection Agency (EPA), spoke with 8th graders recently about a topic on everyone’s mind: climate change.

Marcus started off his discussion with a video that showed the changing seasons across the globe through images shot from geostationary satellites. Students watched snow pile up in the north and storms build in the sea as they reflected on their knowledge of climate change from their science classes. Then Marcus displayed a graph charting the amount of carbon dioxide (CO2) in the air over the past 800,000 years. Today’s levels, he explained, are the highest we’ve ever seen.

Leading CO2 researcher Ralph Keeling gathered data on CO2 at the world’s largest volcano, Mauna Loa, in Hawaii. That research, Marucs told students, showed that “carbon dioxide goes up every single year because of humans.” And, he explained, “CO2 is increasing because we’ve been burning all these fossil fuels and natural gases, and because of the forests that are being cut down.”

Marcus’s presentation also touched on ice cores, El Niño and La Niña, and glaciers. One revelation in particular was shocking for students to hear: “If we just leave things alone,” Marcus said, “by 2100 the DC area is going to have the same climate as northern Florida, whereas if we work on reducing our CO2 levels, we’ll be more like North Carolina.”

In a Q & A session afterward, students thinking about becoming environmental scientists themselves were curious to know what a typical workday looked like for Marcus. “I have a lot of different typical days!” he said. “Some days I give briefings to administrators, and other days I work on writing regulations. Sometimes I brief lawyers on the science they need to know for their cases. Yesterday, I did some computer modeling and some coding, and next week, I’ll get to go to an international climate change workshop in Canada on the science of particular kinds of pollutants.”

Another student, noting the way climate change has been cropping up in the news, asked Marcus why he thought it has become a matter of political opinion. “Two reasons,” he answered. “There’s always uncertainty in science; there are things we don’t completely understand yet. And a lot of the things we regulate [to limit CO2 emissions] make a lot of money, like oil and coal. So you get people exaggerating the uncertainties because they want to keep making money” instead of being regulated.

Writing policy and regulations, Marcus explained, can be one of the trickiest parts about being involved in environmental science. “The wheels of government can sometimes move pretty slowly.” He added that it often takes years for a proposed regulation to make its way through all the necessary stages. But ultimately, Marcus knows that making the effort to slow climate change is worth it.

“Warming the planet changes pretty much everything,” he said. “Drought, wildfires, when animals migrate, sea levels, and all kinds of other things—they’re all affected by climate change.”