A Matter of Faith 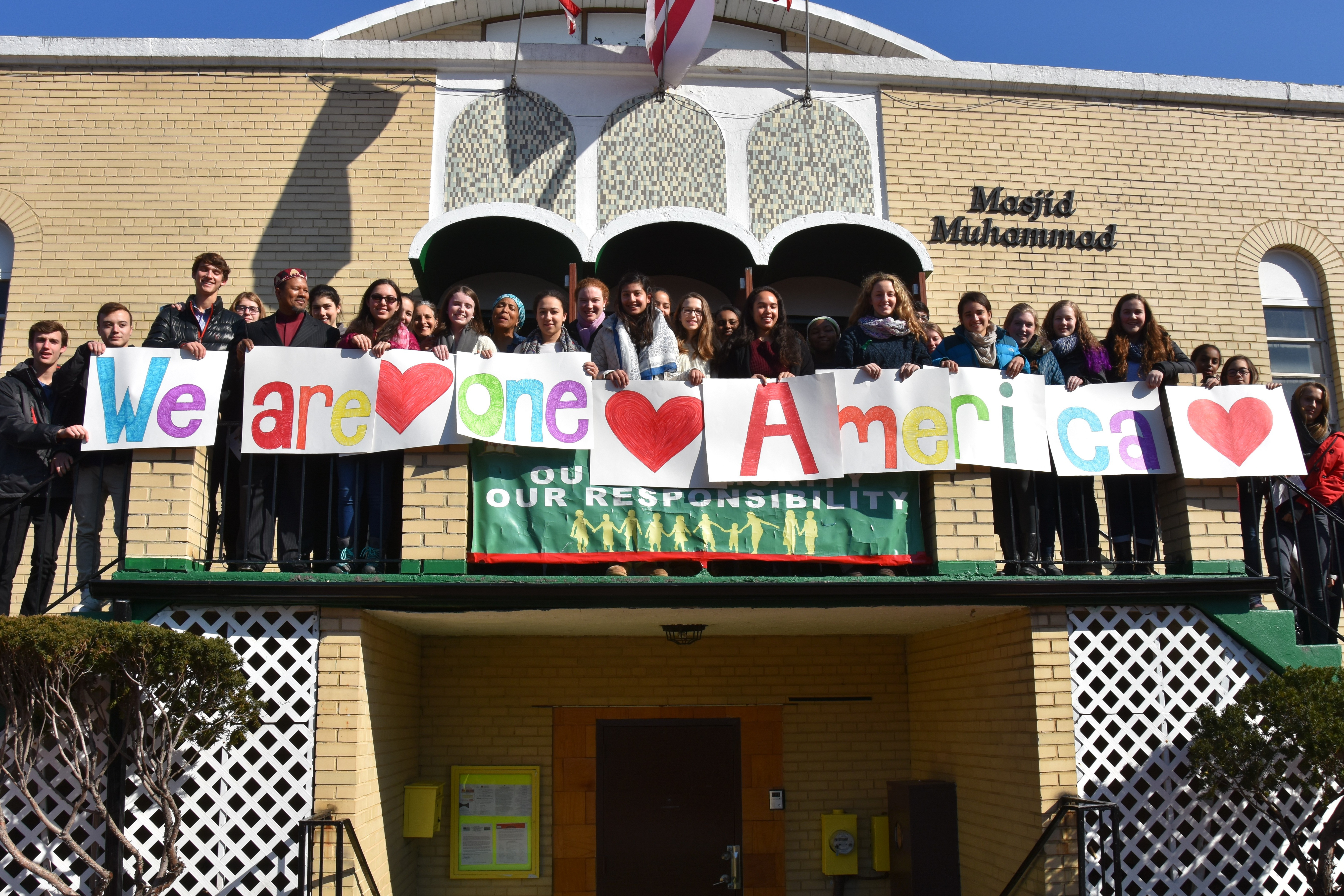 How can a country that preaches equality exclude those who most need inclusion?

Following the Trump administration’s first executive order on travel to the United States, CivilEyes and several other student-led affinity clubs invited students and faculty to gather in the Meeting Room to reflect informally on this controversy. The group expressed a determination to use the Friends tenets of peace and justice to stand in solidarity with those affected by the ban.

Moved to act on this profound emotional outpouring, Tala Anderson ’18, Zoha Siddiqui ’19, and I organized an event for students to demonstrate friendship and support for religious communities in DC. By coming together as a group of religious and nonreligious students, we hoped to show unity for a common goal of peace. We called it the Weekend of Solidarity. From February 17 to 19, we visited Masjid Muhammad: The Nation’s Mosque, the Washington Hebrew Congregation, and the Calvary Baptist Church. The three of us teamed up with Señora Auysha Muhayya to contact each place of worship. They eagerly invited us to participate in their services. So many students signed up, the administration had to cap the group at 40!

Afterward, Ilana Panth ’18 revealed, “My lack of exposure to a variety of religions made the Weekend of Solidarity a really special experience. Although I knew that Islam, Christianity, and Judaism have similarities, I wasn’t sure how alike all three religions are. Being able to witness these similarities myself was an incredible experience.” Jade Lintott ’17 shared how wonderful it was for her to see that all three religions “are about love and action and doing the right things … rather than the narrative of exclusion and intolerance often seen.” Thanks to the hospitality they received, Ilana, Jade, and others left with a new understanding of the uniqueness of each faith as well as of their commonalities. The experience inspired participants to expand their efforts in building interfaith solidarity.

Recognizing that fear stems from a lack of understanding, Tala and I teamed up with Anna Aguto ’18 and Eve Strickberger ’18 to broaden the scope of our knowledge. We sent out a religious/spiritual identity survey to all Upper School students and faculty to get a better sense of the religious makeup of SFS. As a student, I had a preconceived notion based on the student atmosphere that a majority of the student body self-identified as atheist/agnostic. In general, the religious voice at Sidwell Friends (disregarding weekly Quaker practices) is relatively quiet. This posits a query: Do students who are more religious feel they do not have a safe space to talk about their faith? Or do people not know enough about other religions to participate in a discussion?

With that in mind, we organized an interfaith Collection and invited guests from three religions to speak. Señora Muhayya found the panelists at a program titled “Faith over Fear: Welcoming the Stranger,” organized by Washington National Cathedral in partnership with the InterFaith Conference of Metropolitan Washington (among other organizations). Rabbi Aaron Miller was our Jewish representative from the Washington Hebrew Congregation; Reverend Dr. Kelly Brown Douglas came from the Washington National Cathedral; and Imam Talib Shareef, our host during the Weekend of Solidarity, visited us from the Nation’s Mosque. Students asked the panelists what their religion meant to them, how interfaith played a part, and how to expand the knowledge of those unwilling to participate in such conversations. The discussion also touched on topics including the roots of religion, misguided religious followers, and misconceptions associated with religions.

I cannot speak to the Collection’s influence on other students, but it helped me acknowledge and appreciate the nuanced effects religion plays at Sidwell Friends and in our community at large.