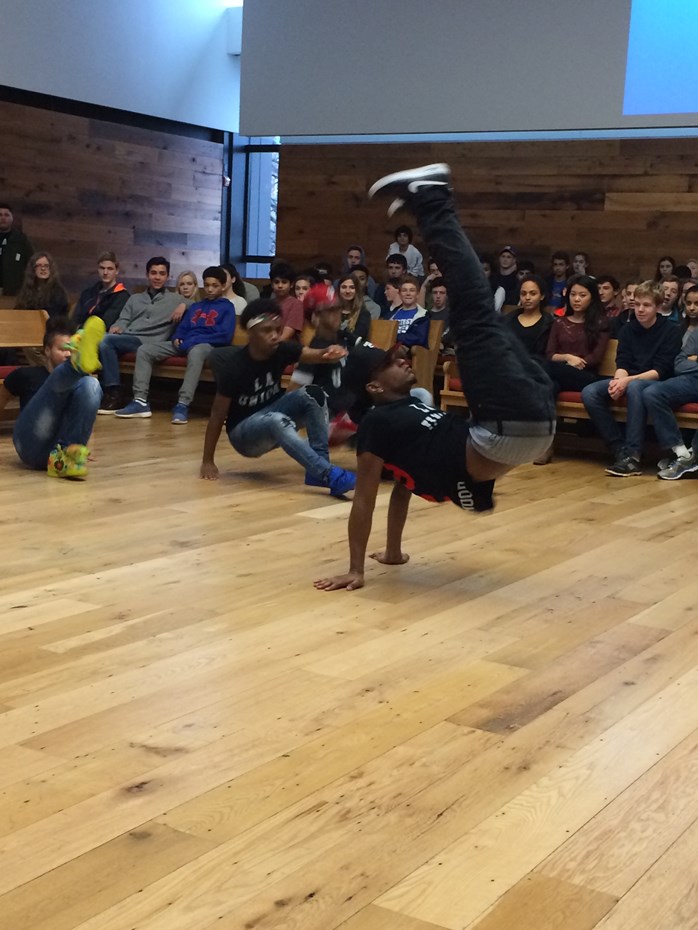 The Upper School club CivilEyes, which promotes social justice through education, dialogue, and action, hosted a recent Collection featuring a performance by La Union 809, a dynamic group of dancers comprised of members primarily from the Dominican community in Washington, DC. The event was timed to honor Dominican Independence Day on Saturday, February 27.

La Union 809 is a collection of young people who want to use the performing arts to change people’s lives. The organization has three pillars: performing arts (dance, music, and production), service, and education. La Union gives inner-city youth a platform for showcasing their talents at events throughout the city.

During the group’s introduction, students learned that Hispanics make up 9.1 percent of the District’s population. While people of Salvadoran origin are the most numerous, people from Mexico, Puerto Rico, Guatemala, Cuba, the Dominican Republic, Bolivia, Argentina, Chile, Colombia, Ecuador, Honduras, Nicaragua, Paraguay, Peru, Spain, Uruguay, and many other nations and cultures are represented as well.

The highlight of the show came when La Union 809 members invited Sidwell Friends students to join them for a lesson in some fast-paced footwork.

La Union 809 “was able to get the audience really engaged and to connect with everybody even though obviously not everyone knew each other,” said CivilEyes club co-founder (along with Matty Cheng ’17 and Elvis Morillo ’17) Narayan Felix ’17. The performance showed “a totally different culture and something that no one at Sidwell Friends had ever seen before. It was cool that everyone was able to experience it, celebrate it, and even get involved dancing at the end.”

Matty most enjoyed talking to the performers beforehand, and seeing how students from two different school environments “can all come together over dance,” he said. “There was no sense of ‘us’ and ‘them.’”

The co-founders hope that the School will have more Collections like this one.

“There was a lot of hype before[hand] knowing that it was a dance Collection,” Matty said.

Narayan agreed. “A lot of people came up to me saying it was the best Collection of the year.”

As for the club’s faculty advisor, Gail Krotky, Narayan and Matty gave her dance moves an “A for effort. She really had the spirit and had more guts than I did,” said Narayan. “She tried it, so props to her.”