A Voice for Young Refugees 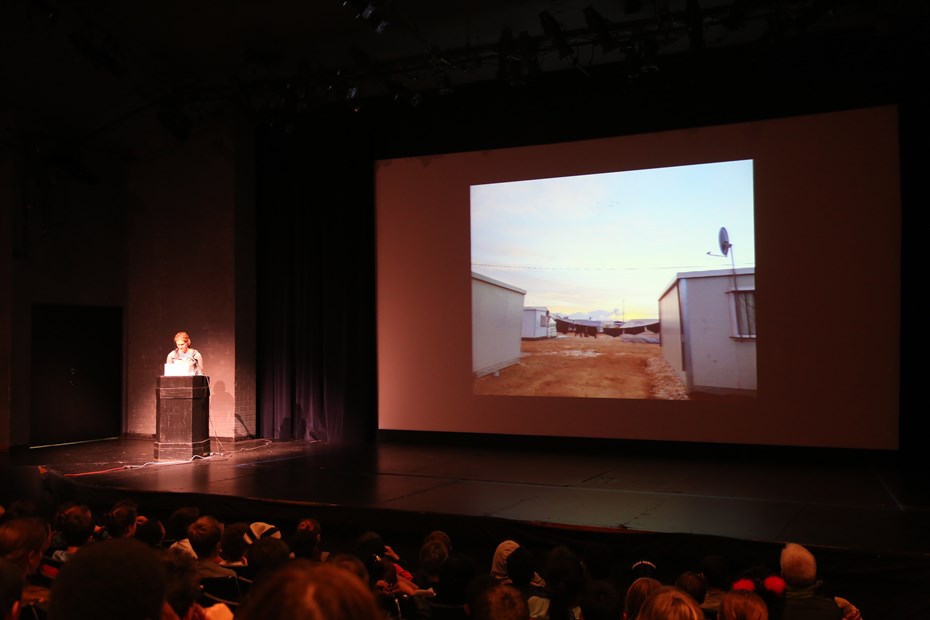 Syrian girls living in Jordanian refugee camps and urban areas got a chance to film their own stories after a media workshop from Laura Doggett ’93.

When Laura arrived at Camp Za’atari in Jordan, two years after the war began, more than 3,500 journalists had visited the camp and reported on refugee life there. The stories were largely tragic, and somewhat black and white. The idea behind giving the girls cameras so that they could tell their own stories, in their own voices, is really what motivated the workshop, Laura said at an SFS Middle School assembly October 30.

A media artist and teacher in the North Carolina area who studied creative writing in college and documentary arts in graduate school, Laura knew it would be an empowering experience for the girls to share their experiences and express their realities and dreams.

At assembly, Laura played three videos for students: The first was made by 17-year-old Khaldiya, who lives in the second-largest refugee camp in the world, in the middle of the Jordanian desert, and who has not been allowed to leave for three years now. Khaldiya said she films when she is mad, and loves the opportunity: “When I film, I am someone very important.” Surprisingly, Khaldiya’s film reflected what Laura called a “positive spirit and energy” among the girls in the camp. In this close environment, they were able to come together as a group and form friendships. This supportive atmosphere contrasted sharply with their former lives in Syria, where they tended to be isolated in small, rural villages where they often left school around 8th grade to help at home and start considering marriage.

The second was created by 16-year-old Walaa, who was living in an urban environment. (Laura explained that only 20 percent of the refugees live in camps; the rest have been absorbed into cities.) In her film, Walaa recounts her terrifying journey as a 14-year-old girl from Syria to Jordan, and how filmmaking has given her hope through the chance to voice her story and reach out to other girls with similar experiences. Walaa said, “The events from the war remain fixed in our minds and hearts because they were so severe. But we can't articulate them, and so I chose to do art and filmmaking and use some of the courage and bravery found within me to express a part of what is inside of me, and what is happening to many young women in my community. I want every girl who went through something as I have or something else to not have to be quiet about it and not to keep things inside of her that would make her stay up all night afraid. I hope that each young woman is able to express her inner self directly and indirectly in order to break the chains of bondage, namely being afraid of what people will say, being afraid of how people will look at you.”

The third video, by Marah, was also filmed in Za’atari Refugee Camp and focused on the lives of the youngest inhabitants, who spent their time playing with whatever could stand in for toys—sticks, rope, plastic water bottles, mud puddles.

“I think that the perspective we gain from the girls’ films and photography is very different from that of the mainstream media and the reporters from outside entering their world for a brief period in time,” Laura reflected. “One of the girls said: ‘I liked to take photographs in the market because I felt like I wanted to show the people and how we are living in the camp. We get dressed up, we eat, we drink, and we use perfume. Not as they might imagine. They think that we are living here like we were living in Syria: waiting for death. It’s true, when we first came it was really hard for us, and we were missing our country very much. But thankfully, just like we are remembering moments back in Syria right now, tomorrow when we go back to Syria, we will remember a lot of moments from here.’

“The girls shot their films almost entirely outside of the workshop hours, on their own. It was beautiful to see when they returned each day to the workshop how each girl filmed and moved through her world, both real and imagined, with her own particular personality and sensibility. Given the tools and training of documentary and artistic expression, I saw the girls gain a sense of agency and power over their own stories and dreams. They transformed this new landscape, where they have little to no control over their circumstances, into terrain for exploration, self-discovery and self-expression. Documentary and expressive arts became a way for them to articulate the sometimes unspeakable, a lens through which to look at and experience the world around them in new ways, and a tool with which they were able to investigate and start to ask themselves, and the world around them, critical questions. . . . And it served as a tool of empowerment, not just to change the course of their own trajectories and stories, but to offer this possibility of change to other girls, and to give alternative ways of seeing to people in their communities, their country, and the world beyond.”

Q: Is there a mosque in the camp?
A few. There are different neighborhoods in the camp, and you can hear calls for prayer going throughout the day. They start at 4:30 a.m.

Q: How did you communicate with them?
I learned basic Arabic on tape beforehand and on the flight over, and the girls and I taught each other Arabic and English. They were great teachers. But I had a translator for deeper conversations. I still talk to the girls through Whatsapp, a free texting service. The refugees all use Whatsapp to keep in touch with family members still in Syria. Almost every day, I’m writing the girls via Whatsapp.

Q: Why are they not allowed to leave some of the camps?
Each neighboring country has different rules for camps. In Turkey, people can leave every day and can try to find work. In Jordan, which has a long history of taking in refugees who assimilate into their culture, the refugees can’t leave at all. But the girls at the camp [I was at] are more stable now. People say, “Oh, they must be so traumatized,” but they’ve been living there for four years now. They are thinking more about thriving, versus surviving. So the question [they ask themselves] is, “How do we make our lives meaningful?”

Can Middle and Upper Schoolers write a book in one month? Can faculty and staff?

Walter Rouse ’19, now a Standford senior, is a finalist for the Campbell Trophy.

Upper Schoolers. In the theater. With a script.

How one parent went from chaperone to CEO and taught an important life lesson about making a difference.

This year’s Rubenstein Guest Artist Kenzo Digital ’98 has altered the New York skyline with an immersive experience that will challenge your sense of the physical world.