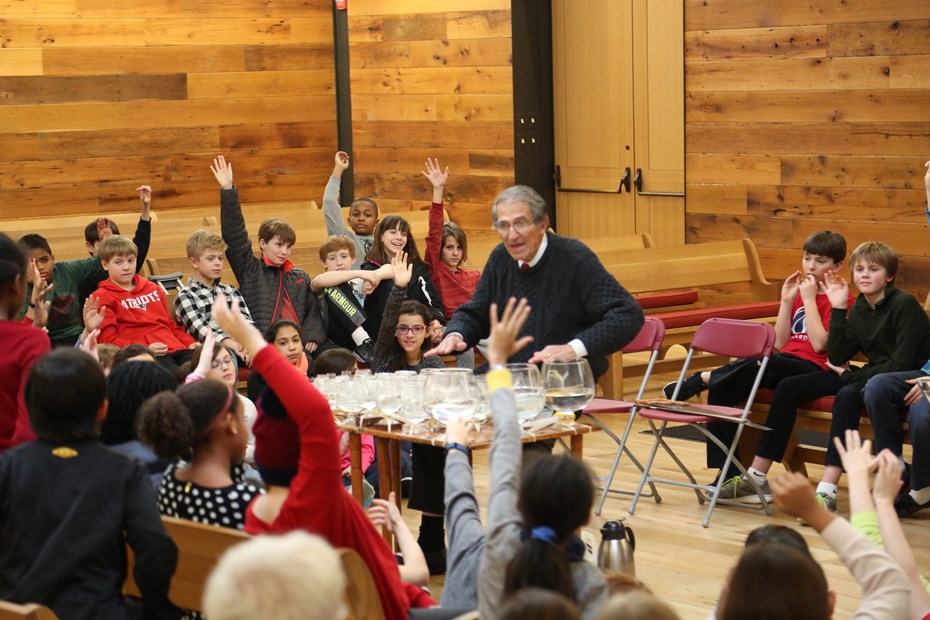 Jamey Turner is a master of the glass harp, an instrument that has a 250-year history. Students were greeted by Jamey as he ran his finger around the rim of an oversize, water-filled goblet. Students could feel the vibration as the sound traveled through the water.

As he sat down at his glass harp (a table covered in ordinary glasses of various sizes filled with differing amounts of water), his lightning-quick hands began the kind of performance that has earned him appearances at The Kennedy Center, Disney World, on The Tonight Show, and more.

Jamey noted that he only uses distilled water, which results in the purest sounds. For this performance, he used three gallons.

Glasses are not the only household item that Jamey plays. He also sat down and pulled out an oversize wrench, which made sounds like a bell when struck with a rubber mallet, and a saw, which he played with a traditional bow. He then helped student volunteers take a turn at making the unique sounds.

“We’re going to have a jam session here,” he promised.

Click here to see a short video of the latest Middle School band!

He closed the presentation with a performance of the Star Wars theme song to cheers from the audience.

Read more about Jamey on his website at www.jameyturner.com.