And the (Go-Go) Beat Goes On 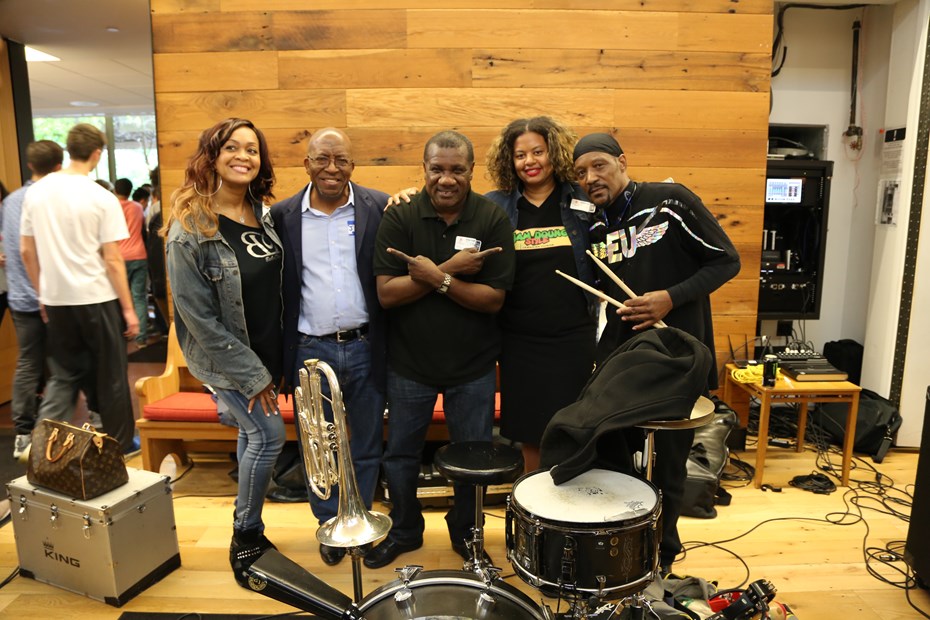 Once upon a time—the mid-1980s, to be exact—“Sidwell was so hot!” said someone who should know: John “JB” Buchanan, who played at School-sponsored go-go dances on campus with the band Rare Essence. The group performed here on so many occasions that for about six or seven years, it was humorously considered the Sidwell Friends “house band.”

JB brought the beat back last week, along with fellow go-go legends Gregory “Sugar Bear” Elliott, JuJu House, and Sweet Cherie Mitchell-Agurs, to let students not only know that the DC region gave birth to go-go, but that Sidwell Friends is part of the rich history of this enduring musical genre.

“Tell your parents you met [these performers]—they will be amazed,” said go-go historian Natalie Hopkinson, also in attendance. Natalie is a former writer on urban cultural identity for The Washington Post and The Root. She is the author of Go-Go Live: The Musical Life and Death of a Chocolate City.

All five guests were on hand at two midday workshops for an educational meet-and-greet, and then at Collection for a raucous demonstration of go-go’s unique, percussion-centric sound. The visit was part of a Teaching for Change initiative in partnership with DC Public Schools called “Teach the Beat: Go-Go Goes to School: Artists and Scholars in the Classroom.”

Sidwell Friends arranged the visit in advance of the Black Student Union’s annual (and sold-out) Go-Go, held on Saturday, May 14.

One of the first orders of business in the RLS Meeting Room was explaining how the term “go-go” came to be. Dance clubs in the black community (and go-go was and is primarily part of local black culture) were arranged with individual tables where people would sit and share drinks and chips while they listened to funk and soul. “They’d get up and dance for a song, and then sit down when it was over,” JB explained. At some point, the leader of the Soul Searchers and the man known as the “Godfather of go-go,” Chuck Brown, started melding one song into the next to keep people dancing. Another popular group, Aggression, began to keep a simple rhythm going between selections. “That beat became the glue between the songs” for other bands, JB said. “Once you got up at the go-go, you would dance for an hour straight”—in other words, you kept going.

While today’s go-go music tends to be faster than it was during its early days in the 1970s, it still bears the distinctive call-and-response element that has always set it apart from other kinds of music. At Collection, when the musicians took up their instruments and started to riff, Sugar Bear let loose with a nonstop string of rhythmic commands—“Lemme hear ya say, ‘Hey!’ Lemme hear ya say, ‘Yea-ee-ay!’” After each cry, uninhibited students sang out in reply.

Toward the end, Sugar Bear invited his audience to join him and either dance or play percussion. Nathaniel Potts ’18, as though he were no stranger to the mic, even took over and led the calls. See the video.

The performance delivered on a promise JuJu had made during the earlier discussions: “Go-go is not something you sit down and watch—it’s something you participate in.”

Not everyone gets that chance, however. With the exception of certain parts of Atlanta, it has remained a regional phenomenon as far as clubs and concerts go. (Sales of recorded music are relatively reliable throughout the mid-Atlantic states.) But at least it has endured: Disco, which got its start around the same time, is largely relegated to oldies radio stations.

For information on go-go as a cultural movement, definer of place, notable bands and more, see the Go-Go Gallery Walk (shared with students during the two sessions before Collection) at bit.ly/1WFfdVZ.