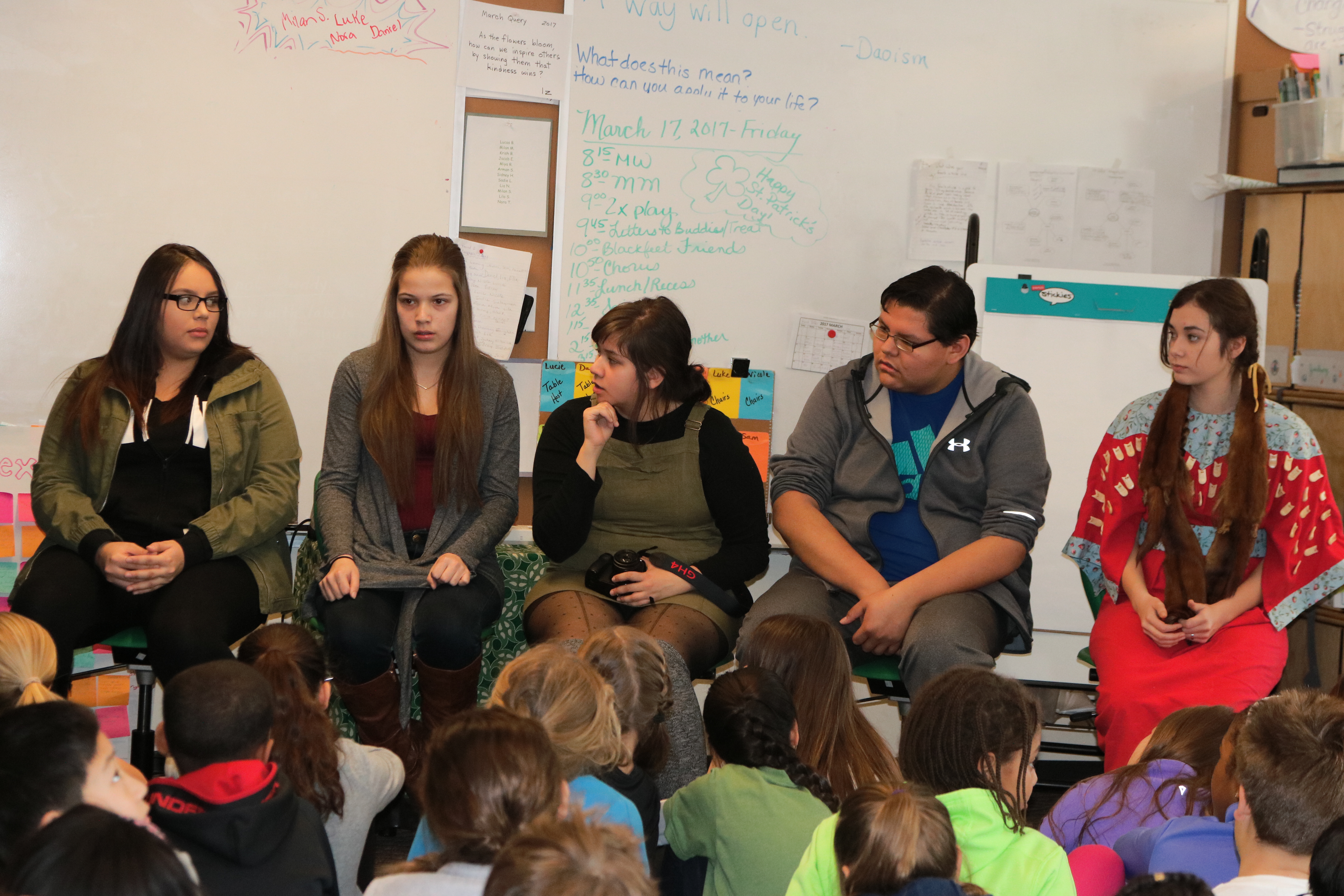 When Sidwell Friends students decided last spring to ban gear featuring the Washington National Football League team, Philip McAdoo—SFS’s director of equity, justice, and community—reached out to Amy Andreas, the school librarian at Browning High School (BHS) in Browning, Montana, which is the largest town on the Blackfeet Indian Reservation. Together, Philip and Amy organized an exchange of ideas and culture, in which nine BHS students would come to DC, experience the city, and stay with students from the Upper School.

On March 17, the Browning contingent visited the Lower School after a few days of seeing the local sights and participating in the daily lives of their host families. From an array of chairs in the 4Z classroom, they talked with the entire 4th grade about human rights and what it’s like to grow up in the Blackfeet Nation. Since the visiting students are part of BHS’s human rights club, senior Dylan Running Crane started off the morning by showing the 4th graders a short film she produced. The film—which you can check out here—explores Browning residents’ views on human rights and what they mean. It closes with a Nelson Mandela quote that everyone took some time to think about: “To deny people their human rights is to challenge their very humanity.”

After that, the Browning students answered questions about their experiences. Fourth graders were immediately interested in junior Hailie Henderson’s outfit, which she explained is traditional Blackfeet regalia, made for her by her grandmother. “It’s what we dance in, [and also] a medicine and wellness outfit, to pray for those who are sick or injured,” she said. “These here are elk teeth. A long time ago, they were very important, because their teeth have ivory in them, which was thought to be really beautiful. It was a hard-to-get kind of dress back then because elk teeth were so rare, and because it’s very time-consuming to make.”

“And is it a costume?” asked Amy, the Blackfeet school librarian, addressing a misconception that some people have about indigenous regalia.

The Browning students also talked about Blackfeet names, which some of them have in addition to their English ones. While they might answer to Harley, Brendon, Chelsee, DaleAnn, Mariah, Lauryn, Dylan, Charro, and Hailie in everyday life, they also possess names with more cultural significance, like Weasel Horn, Diving Woman, Turtle, and Little Badger. “I was supposed to get a Blackfeet name before I came here, but we haven’t done it just yet,” said sophomore Lauryn Jones. “It’s going to be Chinaglass Woman, after my grandmother.”

Although none of the students are fluent in Blackfeet, all of them can say some words in the language. It’s common knowledge that oki means “hello,” and students have picked up other phrases from relatives, immersion programs, and an optional Blackfeet language class at school. “Everyone knows how to say ‘milk,’ because a really weird thing they did in Pre-K was you had to say ‘milk’ before they would give you any,” said Lauryn, laughing.

But the reason the students aren’t fluent in Blackfeet is much more sobering than the 4th graders might have initially thought. “There were these boarding schools that the government sent our grandparents to when they were little,” explained Dylan. “They punished our grandparents if they spoke the language, or if they practiced their culture. They had this terrible motto—‘Kill the Indian, save the child’—because they thought Indians were savage. It’s hard because we have such a lack of resources to further [the language], but there are some people who are trying to revive it.”

Thankfully, their grandparents’ generation managed to preserve many of their beliefs and traditions, which are still practiced in the Blackfeet Nation today. Students can even learn about them at school, in a Blackfeet history class that is compulsory for all sophomores and in electives such as Blackfeet Song and Dance. Ancient Blackfeet tales—like one Hailie told the 4th graders about the sacred “beaver bundle”—are still passed down, and Blackfeet delicacies like berry soup are still enjoyed on a regular basis. After arriving in DC, the Browning students tried to make traditional fry bread for their host families, with some unexpected results.

“It didn’t really work out,” said Dylan, “because they only had gluten-free flour!”

The students have also gone all over the city, wandered the Smithsonian museums, and explored monuments (although, much to the disappointment of one 4th grader, they did not participate in a Segway tour). We hope they enjoyed visiting Sidwell Friends as much as we enjoyed having them here.