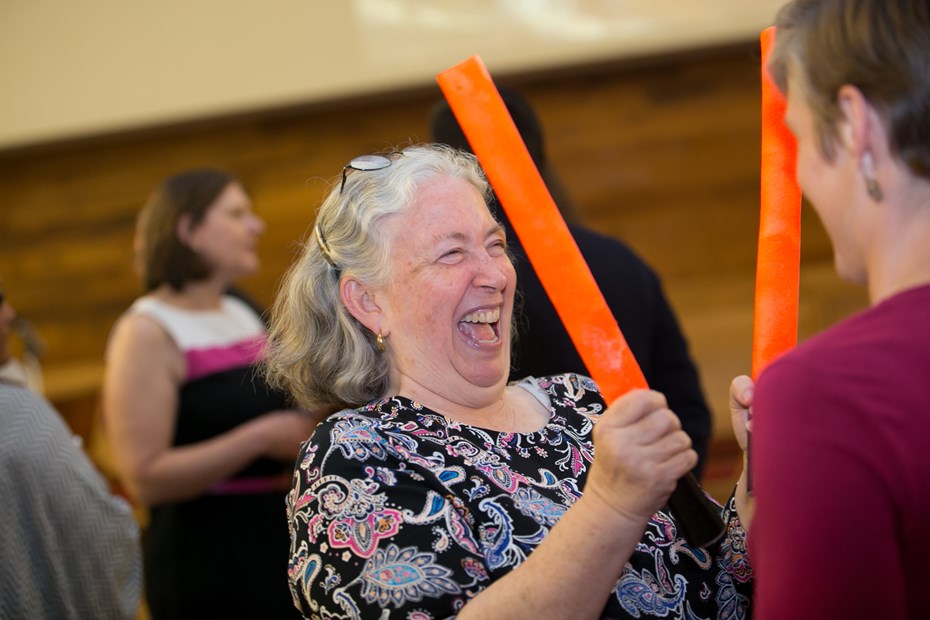 Breaking ground on a groundbreaking building, followed by legions of tours.

Hundreds of Meetings for Worship.

A nonstop parade of proud parents.

And, most important, well over 10,000 Middle School students on the cusp of young adulthood.

After 34 years at the Sidwell Friends Middle School, Principal Sally Selby has lived it all.

When, to a collective gasp, Head of School Bryan Garman announced in October that Sally would be retiring, faculty and staff and the parent community fought to focus on the much-deserved happy things coming her way (chiefly, more time with a retired husband who has missed out on years of early mornings and late evenings with her) rather than on the realization that the campus would not feel the same come this September.

But of all the emotions that swirled, gratitude and appreciation rose to the top, and plans for a “Celebrate Sally Selby” evening commenced. After months of preparation, Sally fans of all ages filled the Robert L. Smith Meeting Room for a fete May 16 that followed the last Parents Association meeting of the school year.

Guests arrived to classical guitar selections by Nealie Deol ’20 and a decades-spanning slideshow crafted by Debbie Borkowski. Music teacher Michael Henderson and choral music teacher Hilary Hogan directed students as they performed some of Sally’s favorite songs: “Glorious Celebration,” chimed out by the handbell choir; Sting’s “Fields of Gold,” played by the 7th and 8th grade orchestra; and “How Can I Keep from Singing” and “Nothing More,” sung by the 5th and 6th grade chorus. (With the lyrics, “We are how we treat each other and nothing more,” it was easy to see why the latter piece is meaningful to Sally.)

Middle School PA Clerks Renee Fried and Beth Zeugin then thanked Sally for providing, from the moment they began working with her, leadership that “far exceeded” her already first-rate reputation. Renee lauded her “incredible ability to know all our kids’ names” as well as her knack for getting things done, illustrating the latter by sharing how February’s first annual Martin Luther King Jr. Day of Service zoomed from suggestion to reality after Sally gave approval “with a twinkle in her eye and a smile on her face.” With Sally’s tenure winding down, said Renee, “You could imagine that she could have easily scuttled the idea, saying, ‘Let’s have the next [principal] do it,’ but she wholeheartedly threw her support behind the idea.” When the day came, Sally “stood elbow to elbow with parents, scooping up rice and beans” and helping with washing up and wherever she was needed. “This,” Renee said, “is Sally every day.”

The Middle School is a well-oiled machine, said Beth, because Sally is “the master.” Her days are packed with events and details, but she remains on top of larger issues—educating parents, ensuring that teachers continue to learn and continue to teach creatively, Beth noted. And, “She epitomizes the lifelong learner” as she listens and makes adjustments to everything from students’ feedback on assemblies to advising steering committees and sorting out carpool lines. “As a parent,” Beth said with a laugh, “I walk away thinking, ‘I’ll have what she’s having.’”

The laughs kicked into overdrive when the Johnson family (parents Vanessa and Ned, and children Katie ’22 and Matthew ’20), assisted by Assistant Principal Jared Givarz and MS Counselor Julia Porter, launched into the comedy sketch “Sally: A Day in Her Life.” The act included what is likely the first and last chainsaw ever to appear in the Meeting Room.

Vanessa’s portrayal of Sally in action found its mark from the moment she donned a thick, salt-and-pepper wig and a familiar pair of eyeglasses. “Sally” began her day in Scene 1 with an inbox of full of e-mails that multiplied like micro-organisms throughout the day. Prop-filled Scene 2, or “Nightmare on 37th Street,” found her directing carpool traffic like an airport ramp marshaller signaling planes to the gate (and using their same bright orange wands). She stoically shoveled snow, cleared a fallen tree (with said chainsaw), greeted every arriving child by name, and otherwise performed a litany of jobs before the first bell had even rung. A scene inside had her fielding 14 new phone messages—10 of them from parents requesting accelerated math tracks and three asking for the addition of Hawaiian and other languages to the curriculum. Another illustrated her talent for magically not only recognizing the owner of a stray water bottle, but knowing the location of said waterless student at that exact moment.

Cue the first of the night’s standing ovations.

Next to honor Sally was her former English student Ali Mohamadi ’94, parent of Maddie ’23 and Caroline ’26. With a warning to Sally that he is a “notorious” cryer (“If I don’t look at you during this, take no offense”) and a shout-out to his old “Team 4,” Ali used a notecard box and index cards to demonstrate how Sally taught students to tackle their end-of-year research project. Write one fact per card, use the whole stack, and fill the box, she had instructed. “It was an exercise in [discovering] what’s important and streaming ideas together to tell a story,” he explained.

To prepare for the demonstration, Ali had contacted his classmates as well as current students and asked them to share something about their principal. He jotted each remark on a separate card. When he compared comments, he found that a number of reflections from old and current students mirrored each other. Pair by pair, he pulled the matching cards from his box and read them to the audience:

Former student: “We all secretly felt that we were her favorite.”
Current student: “She makes all of us feel so special.”

Former student: On an overnight trip, [I discovered] “how much of a dynamo she was.”
Current student: “Sometimes I wonder if Miss Selby has a secret bedroom at the School. I can’t figure out how she stays so energetic.”

Former student: “She was a source of inspiration and a role model during a tough time in my life.”
Current student: “She’s such a wonderful role model.”

Ali shared that he is a pediatrician and thus works with parents on a daily basis. Inevitably, he is asked by them what makes Sidwell Friends so special. Over the years, the “it” factor has remained the same: “It’s the spirit of the School,” he tells them. “The facilities have changed, but the driving principles have stayed the same. The truth is, the entire faculty is a reflection of Sally—her humanity, how she cares for people, her sense of humor and warmth. The Middle School is a reflection of her.”

He concluded by underlining the symbolism in the notecards, pointing out that each person in the room is a card upon which great memories of her have been written. On May 16, Ali wrote his own, expressing his thankfulness that Maddie has had “the good fortune” to be a student of Sally’s as well. “We can’t wait to hear about your adventures . . . and, how it has always been for us, our door is always open to you.”

Gifts from the heart

The honor of revealing the evening’s biggest surprise fell to All-School PA Clerks Priscilla Cheng and Lisa Ward, who announced that more than 100 members of the Sidwell Friends community contributed to an endowment in Sally’s name. Many accompanied their gift with reflections about what she has meant to them. The fund currently stands at $100,000, making it “a legacy that will live on forever,” Priscilla said. Proceeds will go toward causes that Sally has initiated and championed, and she has accepted the job of overseeing how the resources will be spent. This way, said Priscilla, “Sally will remain connected to the School as a steward for as long as she so desires.”

After thanking the PA clerks, who “could not have been better or more fun to work with,” Sally expressed her gratitude to the faculty (“A principal is only as good as the teachers that do the work, and I am fortunate to work with the best”) and to her family for their support through the challenges of what can be an all-consuming job. (One of her thank-you messages was in fact to the security officers who look out for her when she is here “too late.”) “I look forward to our next chapter,” she told husband Dave, adding that they can soon “renegotiate” the cooking, cleaning, and checkbook responsibilities that have long fallen to him.

Sally went on to quote former faculty member David Mog, who once said that great schools enrich not only their students, but the lives of the faculty and staff who work there. “This is life-fulfilling and sacred work,” she said. “I am grateful to the parents and kids for an incredible journey. It has been a gift to me. I am a different person for having spent these years at Sidwell Friends.”

She concluded by sharing Khalil Gibran’s fitting poem “On Children,” and telling parents that it has been “a privilege [to be] part of the bow from which your children are sent forth.”

Before Bryan Garman closed the affair with a short meeting to “hold Sally Selby in the Light,” he praised those who organized the celebration and called it “the most beautiful event I’ve seen in my time at Sidwell Friends.” It was a testament, he added, to a beautiful person.

“What a deep and important part of our community you are,” Bryan affirmed. “It is a magical and sometimes mystical thing, how you create your relationships. I’ve learned so much from you. I know that your life and your love are going to resonate here for years to come.”

Parents can say farewell to Sally at a Goodbye Coffee on Friday, June 3, or Monday, June 6, from 7:45 to 8:30 a.m. on the Zartman House Terrace. Anyone still wishing to make a gift to the endowment in Sally’s name can do so at www.sidwell.edu/support. To view pictures from the evening, click here.