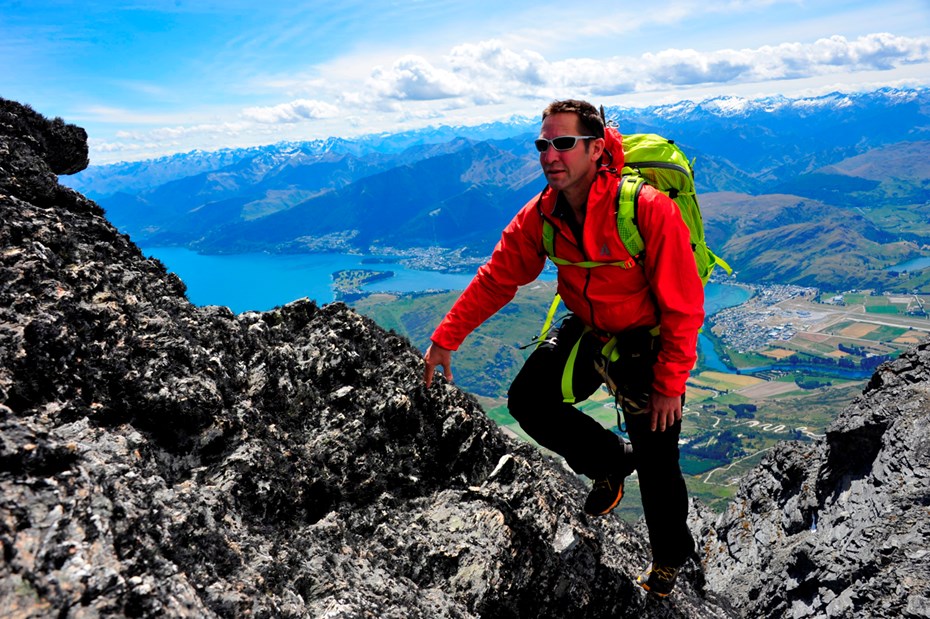 Two names of avid outdoorsmen adorn the climbing wall in Wannan Gym: One is Brent Bishop ’84, and the other is Barry Bishop, Brent’s late father. Both are members of an elite climbing group that has reached 29,002 feet, the summit of Mount Everest.

On Friday, Brent returned to campus and achieved another feat, captivating Middle Schoolers with his breathtaking photos, amazing videos, and inspirational story of athletic accomplishment and environmental stewardship.

You could say that climbing is in Brent’s gene pool. His father was a scientist for National Geographic and was a member of the first American team to reach the summit of Mount Everest in 1963. As a child, Brent spent two years living in a tent in Nepal. “I picked the outdoors and climbing picked me,” he told the students. When the family located stateside, he learned to climb locally at Carderock in Maryland.

In 1994, utilizing the research on the impact of atmospheric changes on the body that his father’s team had pioneered, Brent followed in his father’s footsteps. He described the months of training and preparation in advance of the trip followed by the slow climb to base camp to build up red blood cells so that you can breathe at the intense elevation. After acclimating for a month and with the assistance of expert Sherpas, who put up prayer flags and blessed the climb, Brent’s team attempted to summit. In describing the ascent, he is mindful that this isn’t a task completed alone. “There is a whole team of people that helps you get to summit. You can’t do it alone. It takes leadership and teamwork.”

He described the sound of wind on the mountain as a “freight train.” That sound, in fact, is the jet stream, and making it to the top depends on it dying down at just the right time. The weather was with him, and Brent’s team pushed forward. When they reached the summit, Brent held the same American flag that his father had brought to the peak 31 years earlier.

“There is no easy way to the top—you either summit or you don’t, and there’s no secret to getting there,” he said. “It just takes hard work. Anybody can do it. It’s ordinary people doing extraordinary things.” The climb alone would be a great accomplishment for anyone—but Brent had his sights set on another target as well. Trash.

Brent put a bounty on the trash left behind by previous climbers, including the bulky oxygen tanks. In 1994, 5,000 pounds of trash was collected off the mountain. Old garbage piles were dug up, and over the years more than 25,000 pounds of garbage was removed from the mountain. Brent got to see the fruits of his efforts when he summited again in 2004. “The last time I went up, it was cleaned up. The oxygen tanks are worth about $50 empty (per capita income is around $500 a year in Nepal) so you don’t find them lying around.” Brent’s efforts also helped make “pack in, pack out” a standard in climbing.

For their efforts, Brent’s team was presented with the David R. Brower Award for Environmental Achievement by the American Alpine Club; Brent was later awarded the Lowell Thomas Medal by The Explorers Club.

“I was proud about being able to reach the summit, but I am most proud of the environmental impact we had. It showed that we can be serious climbers and be environmentally responsible,” Brent said.

When asked for advice, Brent offered, “Start in your backyard. Get outside and look for adventure. You’re not going to find it in front of your computer. Roll your sleeves up and make a difference.”

Read more about Brent (and other alumni) in the Alumni Magazine.