From Bustles to Blue Jeans: A History of the Dress Code 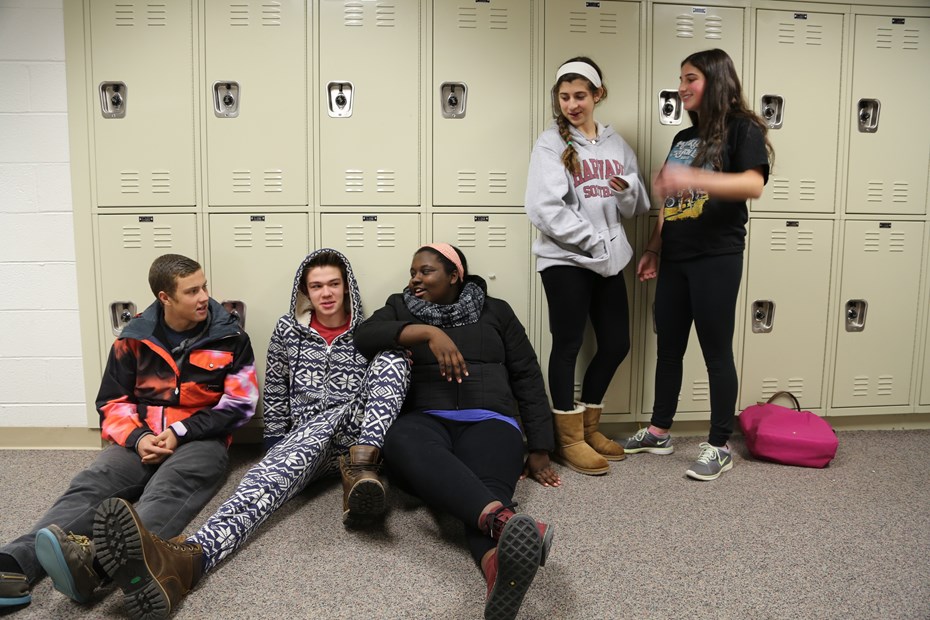 During Thomas W. Sidwell’s 53-year headship of Friends Select (as Sidwell Friends was first known), there appears to have been no need for a written dress code. A memo to teachers from his successor, Headmaster Albert Rogers, written a year after Sidwell’s death in 1936, is the earliest document offering any guidance on student appearance. Rogers observed:

“Our students should be neatly but inexpensively dressed. Boys should wear neckties, should have hair combed. Girls should not come to school with lips or face rouged, finger nails painted. Girls of high school age should wear stockings to class.”

It wasn’t until 20 years later, in 1957, that a formal dress code was published in the student handbook. After going so many years without a policy, School officials suddenly began to comment on the sartorial choices of the Baby Boom generation:

“Upper School: Boys are required to wear jackets and neckties.

Middle School: Dungarees, crinolines, hoop skirts, loafer shoes, and ballet slippers are not to be worn to school. Seventh and 8th grade boys are required to wear jackets and neckties. It is recommended that 7th and 8th grade girls wear blouses instead of sweaters, although sweaters may be worn over blouses. Girls may not wear lipstick.

Kindergarten: Girls should wear washable dresses. . . . Boys may wear anything but blue jeans or cowboy regalia. Children are not permitted to bring guns to school.”

The dress code changed little for the next few years, aside from dropping hoop skirts from the prohibition list and adopting the more modern term “blue jeans” instead of “dungarees.” Mascara and eye shadow were added to the list of Upper School makeup prohibitions in 1961.

The hair length of teenage boys apparently became an issue around 1964, the year the Beatles first came to the United States, when the Upper School Student Handbook insisted that boys’ hair be “neatly trimmed.” At first, skirts only needed to be “attractive but in good taste,” but a year later, in 1966, with Carnaby Street fashions the latest rage, Upper School girls were specifically asked not to wear miniskirts. Both sandals and boots were explicitly placed on the “no” list.

As the late 1960s approached, the student voice became louder. In the fall of 1967, students were apparently asked not to wear or carry flowers, according to the student speaker at the 1968 commencement. “The entire senior class wore flowers to school the next day [after the edict],” he told the crowd gathered behind Zartman House that morning, “protesting by perfect civil disobedience the wisdom of the ban.” The Student Council president for the following school year won on a platform of increased student involvement in School policy, including the loosening of the dress code. The 1968/69 Upper School handbook expanded its dress code section considerably, noting that the hems of skirts and dresses must “not cause embarrassment to others, regardless of posture.” High school girls could wear makeup to “enhance natural good looks,” but “bizarre effects” were not acceptable. The handbook noted that boys were still not allowed to wear “blue jeans or other apparel resembling work clothes.” Boys’ hair had to be “worn above the collar, tapered, above the ears, and clear the eyebrows.” Facial hair was also addressed: “Sideburns may be worn to mid-ear if neatly trimmed. Beards and moustaches are not permitted.”

In the fall of the 1968/69 school year, a student-parent-faculty committee was formed to oversee the dress code. Citing the “bewildering variety of styles that have been introduced,” the committee was tasked with “working together to clarify problems of appearance as they arise and to share a measure of responsibility for maintaining standards.”

But it was 1969, and rebellion was in the air. Alongside news about leftist student movements and marijuana use, the pages of the student newspaper were filled with commentary about the dress code. One student found the topic to be more heated at Sidwell Friends than at other local high schools. At a nearby boys’ school, the article claimed, most students naturally conformed to an unwritten dress code. “There are a few jerks who might want to wear long hair or tight pants, but no hippies,” one student there was quoted. “A hippie would get beaten out of here in one day. Literally.” Dress codes at public schools, on the other hand, were said to be nonexistent, with students freely sporting beards, micro-minis, boots, and sandals. “You just have to wear clothes!” one student from Bethesda’s Walt Whitman High School told The Sidwell Friends News.

With the conversation becoming increasingly heated, the student-run Dress Council conducted numerous polls in the spring of 1969. In the interest of “maintaining a cosmopolitan community of students and faculty,” as Headmaster Robert L. Smith put it, he agreed to relax the dress code in a few places. Skirt-style culottes and boots would now be allowed for girls. Boys successfully petitioned to add turtlenecks to the list of acceptable shirts to wear under their jackets.

Another rule change resulting from the committee involved boys’ hair. Beginning in 1969, boys were allowed to grow sideburns to ear level, as long as they were neatly trimmed, but hair still needed to be “worn above the collar, eyes, and ears.” It seems that some students took this as a creative challenge, using hair bands, bobby pins, pigtails, or inventive combing techniques to achieve nominal compliance. The following year, the administration divorced itself from the hair issue altogether and omitted any mention of hair for boys or girls in the dress code.

While hair dominated the boys’ agenda, girls fought for the right to wear pants. “It is not healthy for anyone to be out in the cold, especially on windy days, with legs partially bare and having only the thin protection of stockings,” wrote two female students to Headmaster Smith. In a January 1970 memo to several School administrators, he confessed, “I find it difficult to justify a prejudice which I have built up about girls wearing pants, even though I still find them somewhat difficult to accept. They are modest, practical, and warm.” Beginning that year, girls were finally allowed to wear long pants from mid-November until spring break, as well as sandals.

For the headmaster, the balance between individual freedom and communal uniformity was not a trivial matter. In a back-to-school memo to Upper School faculty in 1970, he wrote:

“Ours is a school which seeks and accommodates diversity. The extent to which we are able to do this distinguishes us from every other independent school in the area. . . .[N]o dress limitation on the one hand or a stringent code on the other would create uniformity and diminish diversity by masking it or discouraging it from being here.”

The administration’s attempt to appease both students and adults did not hold for long. In the fall of 1970, after yet another poll, the administration agreed to alter the dress code to allow dashikis as an alternative to regular jackets—but sweaters were still prohibited.

Students were still not satisfied. Student Council meetings during the 1970/71 school year essentially consisted of negotiations with the administration about the dress code. In the spring, the Student Council submitted a proposal to the School: Their demands, supported by 94 percent of students in a rigorous lunchroom poll, were that boys should not have to wear jackets and ties, and girls should be able to wear pants all year long. The students prevailed. Starting with the 1971/72 school year, girls were allowed to wear (non-denim) pants year-round, and boys could now leave their blazers and ties at home.

Despite all of the concessions made to changing trends, blue jeans remained a sticking point. But when some students participated in a weeklong exchange program with Walt Whitman High School in the fall of 1973, they were struck by seeing their public school counterparts wearing jeans to class. The student government soon leapt into action and organized a nine-day trial period of denim-wearing on campus. Finally, with the acceptance of blue jeans in 1974 and shorts (but not cut-offs or hot pants) in 1975, the old dress code had been stripped bare.

As fashion evolved in the early 1980s, explicit restrictions against halter tops, flip-flops, bathing suits, and ripped or torn clothing were put in place. Tops that exposed the midriff and visible undergarments were put on the “no” list in 1999 and 2000. Shortly after, prohibitions against “oversized sleeveless sports jerseys and spaghetti-strap tops” were added.

When the administrators of the mid-20th century first put a dress code in place at Sidwell Friends School, they would never have imagined that they would need to explicitly remind students that underwear belongs under clothing or to keep their bellybuttons covered at school. Only time will tell what clothing boundaries future generations of students will try to push.

The author wishes to thank longtime archives assistant Nancy Fetterman, parent of Graham Fetterman ’04, for her extraordinary care in conducting background research for this article.