From Dumplings to Daoism 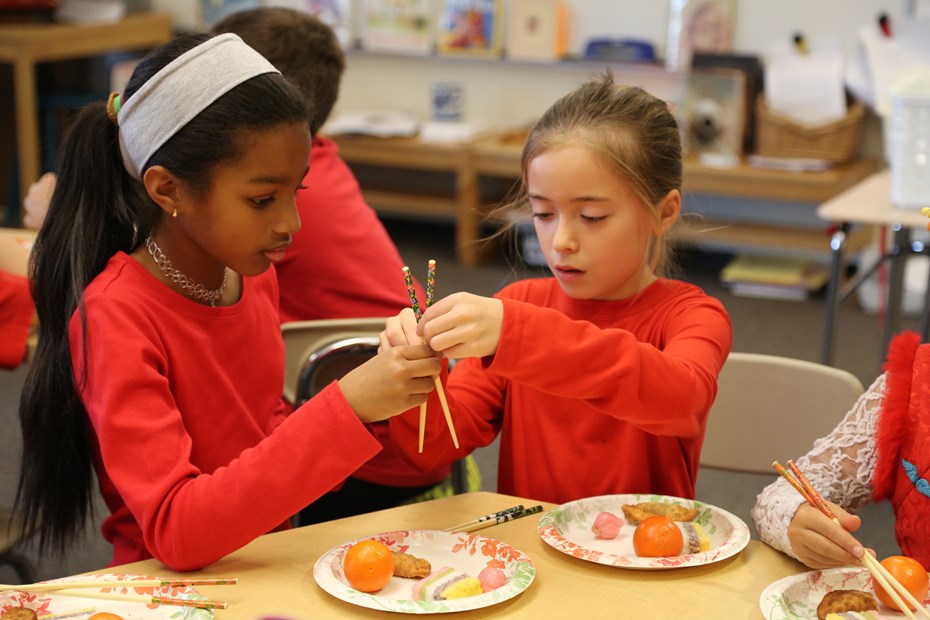 There was more than excitement in the air on Monday as the Chinese language and culture curriculum rolled out on the top floor of Lower School: The mouthwatering smell of steamed dumplings permeated classrooms and hallways after small hands tackled the big job of filling and folding the traditional New Year delicacies.

Afterward, students stomped through the School and out onto the playground in a lively parade that emulated the time-honored ritual in Chinese culture of scaring away any evil spirits that might have settled in over the past year. Tambourines, triangles, maracas, and other noisemakers combined to raise the decibel (and fun) levels.

Quieter activities included practicing harder-than-it-looks calligraphy, watching the animated movie Kung Fu Panda for references to concepts and ideas from ancient China, and listening to Zeidman Fellows/Chinese exchange students Sherry Wang ’17 and Yechen Hu ’17 as they described what a typical Chinese New Year is like in their home country. (Later, the two shared how much they are enjoying their time at SFS, particularly the way other students go out of their way to befriend the girls and how faculty encourage discussion and questions in the classroom; both of these things are not as prevalent back home, they said.)

“In addition to studying Chinese language all year as part of the 4th grade social studies program, we also tie in to traditions that carry on through today in China. Celebrating the Lunar New Year is a wonderful way to do that, and many 4th graders look forward to the time of year when they get to parade around the school ridding each and every classroom of evil spirits,” said faculty member Edith Zhang ’81.

View photos from the day here.

Sidwell Friends School has been continually monitoring the spread of the novel coronavirus (COVID-19). After thoughtful deliberation, the School has decided to proactively transition to the Distance Learning Plan (DLP), effective Monday, March 16.

How some Lower Schoolers brought a little bit of the classroom home.

One Middle Schooler Plus One High Schooler Adds Up to More than Mathematical Success
March 16, 2020

Built on a shared love of math, a relationship between two students showcases the value of community.

A course developed by two Lower School teachers uses a very tactile way to inspire students and staff to let their lives rock.

The Sidwell Friends winter teams found success on the court, on the mat, and in the pool.