Get Your Motors Runnin’ 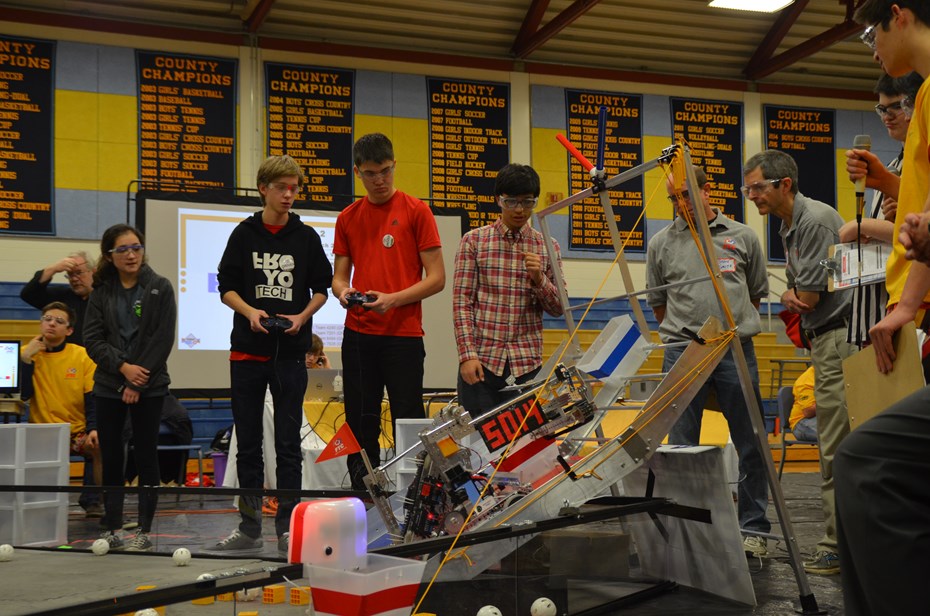 Three robotics teams pieced together successful performances this year competing in the FIRST Tech Challenge (FIRST stands for “For Inspiration and Recognition of Science and Technology” and is a series of competitions in which teams of students in grades 7 through 12 design, build, program, and operate robots). The teams included varsity-level Iteration Infinity (aka The Arnold SchwartzenegGEARS); JV-level Kinetic Vendetta; and rookies Holy Churros.

The season kicked off in December, when the SFS teams hosted 27 others in the Athletics Center for the first qualifying tournament.

The teams are now ready to move on to their spring season—underwater robotics!

Esha Chaudhuri ’17, a member of Iteration Infinity, shares about why she loves robotics:

“Much of the work we do is during our twice-weekly meetings that occur for months before we compete. During a competition, it is great to see all that work coming to fruition, but part of the experience is also seeing how other teams approached the same challenges in unique ways. Often, something small will go wrong, and the robot we spent months working on will malfunction completely. Still, I enjoy robotics for our meetings more than the competitions. There is a lot of trial and error, and I enjoy the problem-solving aspect the most. Especially when we are first designing our robot, there is really no limit to what we can build (as long as it fits in an 18" by 18" by 18" cube), and we always build multiple robots or parts of robots, and end up scrapping a lot of ideas, before we find our final solution. At the end of our competition season, I always find myself wanting to start again from the beginning and put into practice all the things we learned from our repeated trial-and-error, testing, and from watching other robots.”

Congratulations to all of the robotics team members!