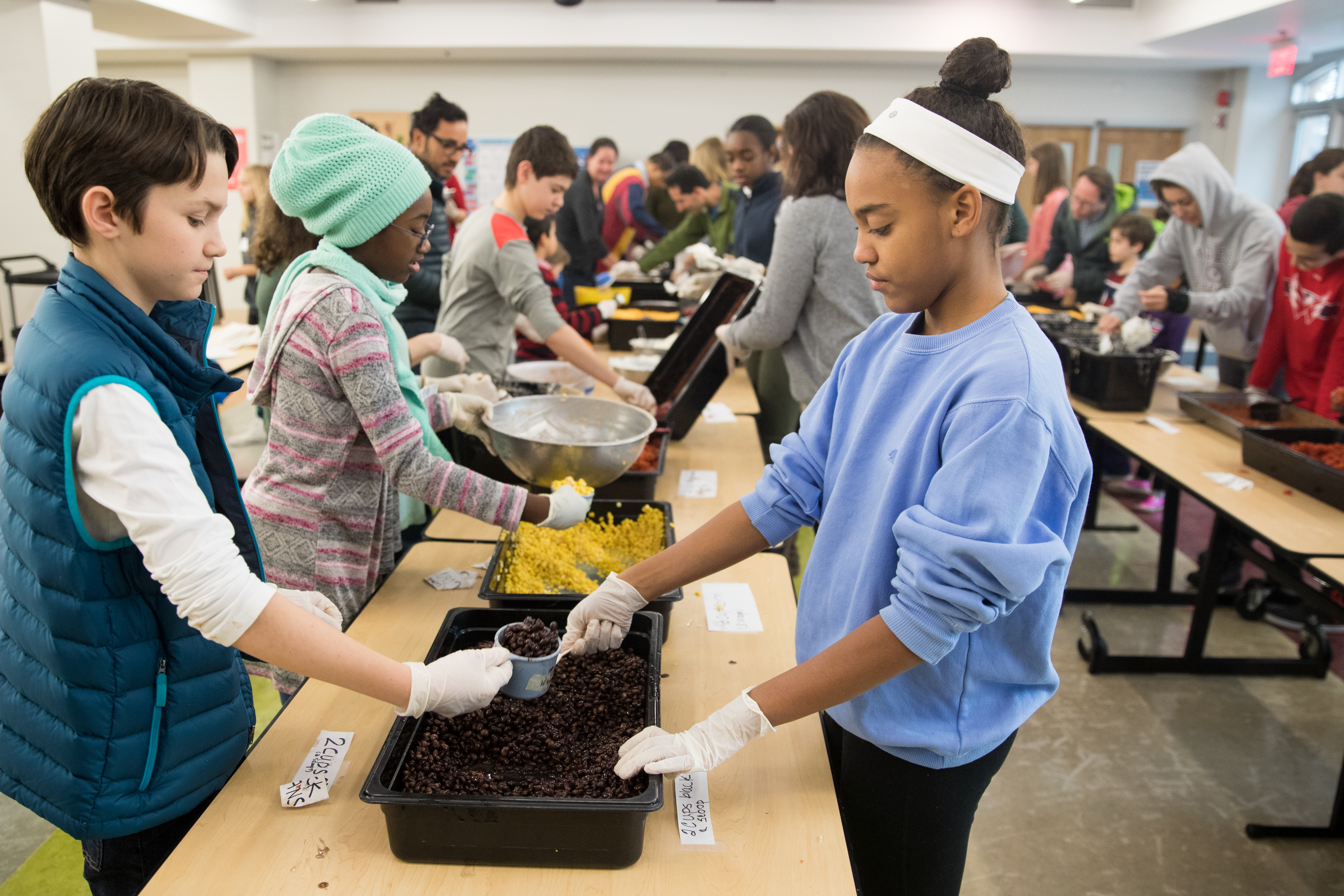 Going to school might seem like a surprising way to spend a federal holiday, but that’s just how a large number of Sidwell Friends students, parents, faculty, and alumni celebrated Martin Luther King Jr.’s legacy. January 16 marked the School’s second MLK Day of Service, an opportunity for participants to work side by side on projects that help people in need. This year’s event focused on homelessness.

The day started with a light breakfast and a Meeting for Learning, where the Parents of Black Students affinity group offered some food for thought.

“Two-thirds of the world’s people will go to bed hungry tonight,” said Georgine Newman-Alawode, mother of Yinka ’18 and Kunle ’22. “If Martin Luther King Jr. were alive today, he’d be positioned at the forefront of the homeless movement.”

Next, participants heard from several speakers within the SFS community who have made it their life’s mission to help the homeless: Antonia Fasanelli ’92, Ben Lorenz ’95, Cal Hoffman ’76, and David Levine, father of Jordan Levine ’13. Each of them plays a vital role in helping to reduce homelessness and eliminate the stigma that it brings. “Oftentimes, when I’m talking with people about homelessness, there’s a presumption of fault,” said Antonia, who is the executive director of Homeless Persons Representation Project. “I hear, ‘Why can’t they get their life together?’ Or, ‘If they just got up earlier in the morning … .’ But we need to be by their side in their journey.”

Inspired by these alumni, students and families headed to the dining room to begin their service activities. They chose between making valentines for veterans, baking casseroles for Martha’s Table, designing winter care bags for the Georgetown Ministry Center, and putting together care packages for residents at the N Street Village day center for women. Lila H. ’24, who participated in the care package effort, reflected on King’s work.

“We listened to the ‘I Have a Dream’ speech in the car on the way here,” she said. “His life was so different from my life, and much harder. It was amazing, the way he spoke out.”

Nolan L. ’21 agreed. “[This day] is about following in his footsteps. We can be very self-centered in 2017, and Martin Luther King was all about helping others and broadening horizons. It needs to be our goal to start thinking about the world again, and not just what’s on the screen!”

“It’s about fighting for the rights of people who are less fortunate than you are,” added Philip C. ’21. “And making their lives better using what you have.”

Later, speakers from the National Coalition for the Homeless shared their experiences in the Upper School library. Though their stories involved great pain and hardship, they also spoke of determination, hope, and hard-won wisdom, which they now use to help others in similar situations.

Head of School Bryan Garman ended the day with his thoughts: “One single act of kindness can have a huge impact,” he said. “And every day, we have the opportunity to be kind.”

For more pictures from the Day of Service, click here.