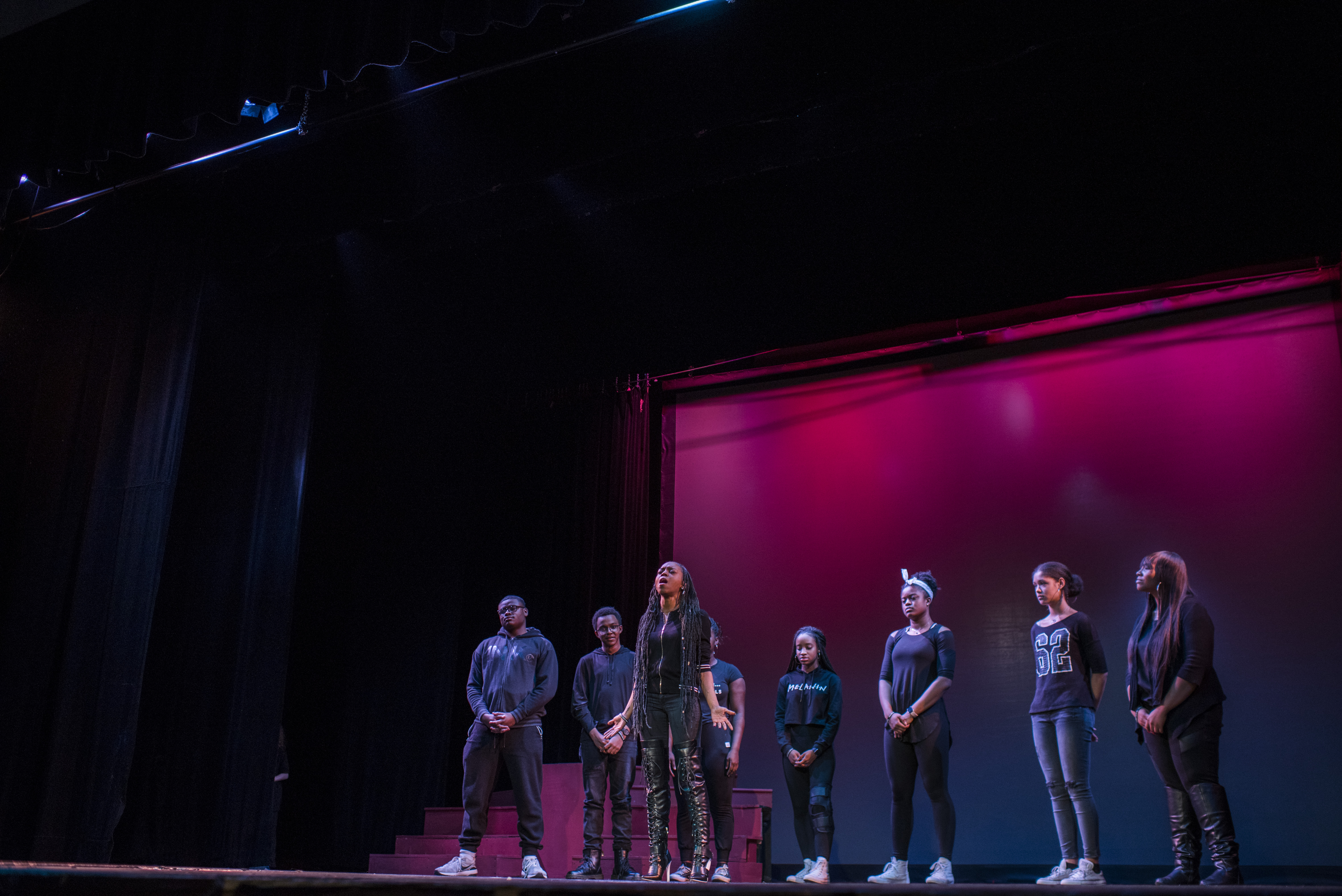 If you attended this year’s Black Student Union Production, you know that our students summoned tremendous courage and energy to speak truth to power. Upper and Middle Schoolers delivered provocative monologues about their experiences in school and out, raised consciousness about ignorance and injustice, and expanded our minds. Younger students tugged at our heartstrings, recited poetry, and resurrected Nina Simone in song. Under the direction of Pilar Lynch ’91—and with the leadership of advisors Hayes Davis, Brittany Chase, and Philip McAdoo—the students wrung a compelling narrative of conscience and consciousness from their busy lives, lifting their voices and our spirits, leading us in what has become an annual performance of “Lift Every Voice and Sing,” the “Black American National Anthem.”

Their words resonated with alumni who gathered to support the event. Comedian and writer Baratunde Thurston ’95 praised the students and, writing on the website Shondaland, reflected on this essential SFS tradition. “I appreciate that we had the opportunity to control the narrative during a time of year that so often has people telling us what our history is, who mattered most, and what ‘achievements’ were safe to celebrate,” he remembered. “The best way to honor history is to let people tell their own.”

Along with fellow alumni, Baratunde honored the late Quinnetta Norman, former assistant to the Upper School dean of students and advisor to the BSU. A devoted staff member, advocate, and teacher in the broadest and deepest sense of the term, Quinnetta had a tremendous impact on a generation of students. After thanking Quinnetta for her love and generosity, Baratunde introduced the incomparable Ricky Payton Sr., former SFS teacher and musical director of the show. Backed by a video tribute that featured Quinnetta’s stunning voice, Ricky sang a plaintive but hopeful version of Stevie Wonder’s “If It’s Magic.”

“Black Lives Matter,” read the cake that the audience shared in the ebullient reception that followed in the Kogod Arts Center. So does history. The BSU Production is an important part of SFS history, which is embedded in that of our city. To understand more about our past and its relationship to the present, read Chocolate City: A History of Race and Democracy in the Nation’s Capital. Authors Chris Myers Asch and George Derek Musgrove, who take their title from the Parliament song of the same name, have produced a meticulously researched book that interprets the District’s history with candor and clarity.

The decision to move the young republic’s capital to the cradle of slavery had a profound and predictable impact on the city’s culture. This fate was sealed in a legendary meeting, now memorialized in Hamilton, between a pair of slaveholders (Jefferson and Madison) and Hamilton, the secretary of the treasury. From the time that Madison tapped the Quaker surveyor Andrew Elliott to lay out the District with Benjamin Banneker, a self-taught African American mathematician, race relations demarcated the boundaries between free and unfree.

The District represented the center of black opportunity but, as the symbolic capital of equality, starkly revealed its limitations. The republic’s contradictions could be seen in the enslaved labor that built the city and in the slave trade that flourished in Alexandria, which was retroceded to Virginia in 1846. The Civil War transformed DC into the “Yankee City,” opening new opportunities for black residents (slavery was abolished in the District in 1862) and “contrabands” who fled the Confederacy. By 1870, one-third of the city’s population was African American. Ninety years later, the city had a majority black population.

The ongoing march toward equality has been hard-fought and uneven, but Asch and Musgrove lift the voices of those whose lives and work made a difference in the struggle for justice. Faced with the proposition of being sold with her daughters to the deep South, the enslaved Ann Williams sought to escape captivity when, in 1815, she leapt from the third floor of an F Street tavern. Unmoved by her injuries and her courageous attempt, the slave traders left her in DC, wrenched her children from her care, and forcibly relocated them to a cotton plantation. Soon thereafter, the white Quaker Samuel Janney established the Benevolent Society of Alexandria to help enslaved Americans sue for their freedom in the courts. Meanwhile, Paul Cuffee, a Friend of Native and African American descent, embraced the controversial concept of colonization, collaborating with city residents to help formerly enslaved people find freedom in Sierra Leone.

The breadth and depth of Asch and Musgrove’s narrative is impressive. They chronicle the city’s changing residential patterns, describe the unjust impact of eminent domain and gentrification (encapsulated in the phrase “White man’s road through black man’s home”), and analyze the various models of government under which District residents have lived. “We hope that Chocolate City deepens love for the city,” they write, “and inspires readers to engage in thoughtful conversations about race and democracy.”

The BSU Production aspires to do the same. And just as Chocolate City is relevant to all residents of the District, regardless of race, the production is ever more relevant to the entire Sidwell Friends community. By listening deeply to our students, by considering their place in our collective history, we can come to know ourselves and one another, to understand the Sidwell Friends experience, and to work collaboratively to realize the mission of our School and the promise of our city.