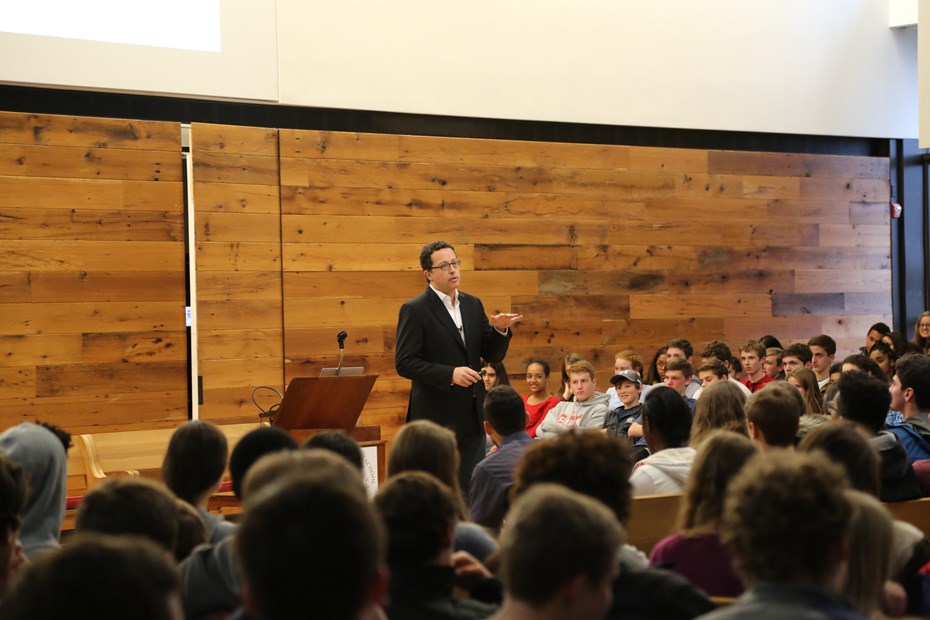 It’s a safe bet that dinner table conversation was livelier than usual for many Upper School families on November 30. Earlier that day, New York Times “Your Money” columnist Ron Lieber, author of The Opposite of Spoiled, met with students in Collection and encouraged them to ask their parents a traditionally tricky question: “How much money do you make?”

The query, along with others designed to demystify finances, is part and parcel of his strategy for helping young people become fiscally responsible.

In addition to speaking with students, Ron presented to parents in the evening at an event sponsored by the Parents Association.

Regardless of parents’ comfort (or lack thereof) with this question, “That’s none of your business” is “a terrible answer,” said Ron to students. “It’s factually inaccurate: If you live in the household, it is your business,” because much of a family’s income is spent on meeting children’s needs and “wants.”

“You’re overdue to have this conversation if you are a senior,” he asserted. “It’s your job to figure out how the world works. Money is the source of incredible power, but also of mystery. We don't do much in America to teach kids or even grown-ups about money.” He added an important caveat: “It’s wise to ease into this topic by asking them to tell you stories” about your family’s relationship with money. “Then, hit them with the hard ones,” Ron said. A particularly important one: “What is their ability and willingness to help you with college tuition?” This is vital information for juniors and seniors as they decide where to apply.

In addition to encouraging parents to be transparent about family finances, Ron pointed to several other methods parents and children can use to build financial literacy.

For more information on Ron Lieber and his book, The Opposite of Spoiled, visit www.oppositeofspoiled.com. A limited number of signed copies are available for sale in The Fox Den.