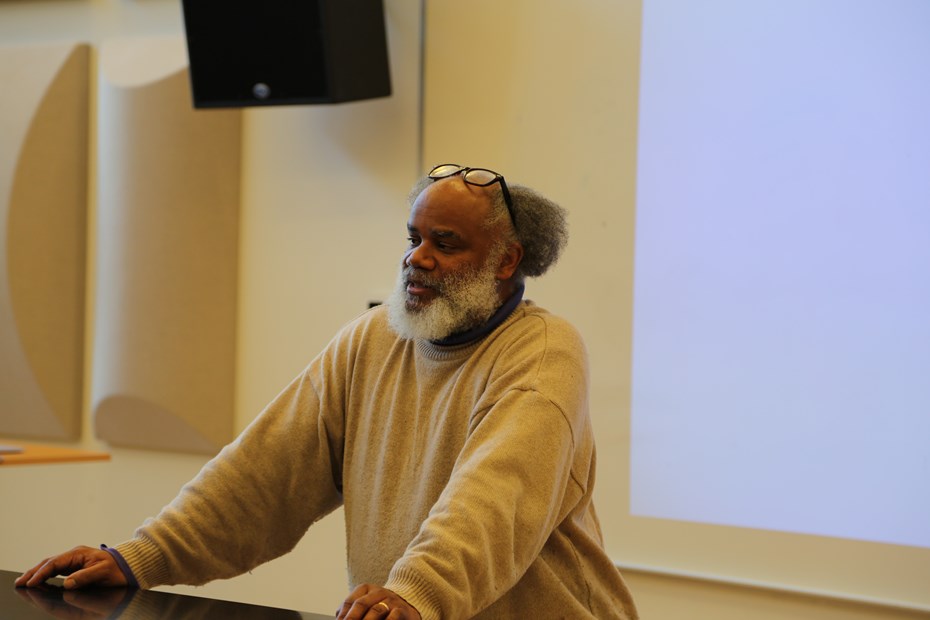 Acclaimed composer Jeffrey Mumford ’73 returned to campus to meet with students in Chorus, where he shared about his long career and played several contemporary selections for them to analyze.

The artist was in town for a Kennedy Center appearance by opera singer Alyson Cambridge ’97, who performed the world premiere of Jeffrey’s piece “three windows.” (He says he prefers to lowercase his composition titles to reflect the “borderless continuity” between all of his pieces.) Washington Performing Arts commissioned him to create “three windows” specifically for Alyson. Jeffrey met Alyson when she was a student of his at Oberlin College. “I was impressed with her voice and acting and how she ‘textualized’ the pieces she was singing—she is an effective advocate for expressing the meaning of the words,” he recalls.

In 2013, Jeffrey—who used to be a painter—was the Composer-in-Residence at the National Gallery of Art, an honor that had particular meaning for him because it was one of his favorite places to visit as a youth. Several of the paintings there influenced his style of music, especially those with cloud-filled canvases (clouds, to him, conjure transformative “separate worlds in the sky”). He is captivated by the way that light plays upon the paintings depending on the time of day. He in turn sees his musical creations as also being “very visual” and filled with light.

For Jeffrey, the seeds for a love of a wide range of music were sown in childhood. He became familiar with different styles—from Brahms to Count Basie—by listening to recordings that his parents would play. He remembers with fondness a book called A Child’s Introduction to the Symphony, which he and his brother would use for playing games.

Today, his music has been performed by major orchestras, soloists, and ensembles both in the United States and abroad. He has numerous fellowships, grants, awards, and commissions to his credit. He has taught at the Washington Conservatory of Music, served as Artist-in-Residence at Bowling Green State University, and served as assistant professor of composition and Composer-in-Residence at the Oberlin College Conservatory of Music. He is currently distinguished professor at Lorain County Community College in Northern Ohio.