“Music Makes the World Go ’Round” 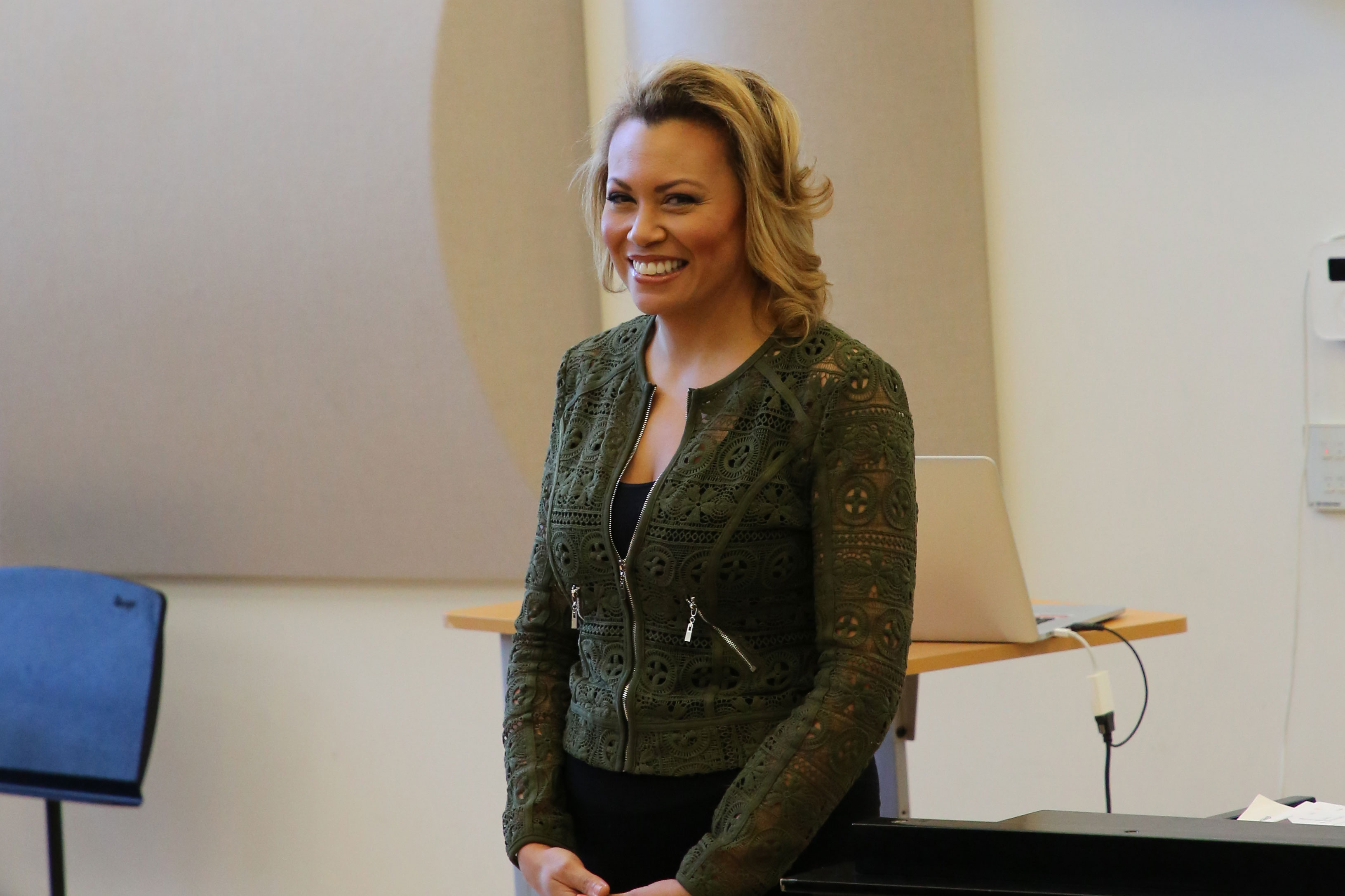 Alyson Cambridge ’97, international opera and jazz singer, returns to the place where she once harbored a big secret!

The Upper School Chamber Chorus was spellbound this week by Alyson Cambridge ’97, an opera and jazz singer whose talent was already in bloom as a newly arrived 9th grader at Sidwell Friends. She is in town for her “Until Now” tour at Wolf Trap to build on the success of her 2016 jazz album of the same name. On February 10, she spoke to students about music, perseverance, and lessons learned from her time at SFS.

Alyson began by showing videos of her performances of the operatic classic “Vissi d’Arte” from Tosca and the jazzy song “Black Coffee.” “This is the Sidwell Friends out-of-the-box part of me,” she said. “Jazz is something I grew up with, and I finally had the courage to break out of the opera box.” In addition to jazz, she has also put her stamp on pop and musical theater.

As a child, Alyson was a “total ham and mimic,” she said, and since her mother was an opera and jazz fan, Alyson frequently imitated the music she heard in the house. She was good enough that she was told to take voice lessons. When she arrived for her first class, her teacher sighed and said, “Your mom tells me you have an ‘opera voice.’ Let’s hear it.” Alyson, though embarrassed, complied. Once her teacher had gotten over her initial shock (“You’re only 12?” she asked Alyson in disbelief)—the instructor announced that she was going to train Alyson to sing in the classical style.

Alyson began her education at the Potomac School, but transferred to Sidwell Friends after she took a tour and was impressed with the School’s “pioneering spirit.” She had two free periods every Wednesday afternoon, which she used for more voice lessons—but she went mostly in secret, afraid of how other students would react. In the spring of her senior year, she was finally convinced to show off her talents in a performance of Mozart’s “Alleluia” to the Upper School—and was immediately surrounded by impressed students and teachers. “I thought, ‘Oh, okay, I guess it’s not uncool to be an opera singer,’” she said with a laugh.

She went on to Oberlin College, where she double-majored in voice performance and sociology and considered going into law. When a chamber chorus student asked her why opera prevailed, Alyson grew thoughtful for a moment. “I made a deal with myself,” she said. “I thought, ‘I’ll apply to the two most prestigious voice schools, and if I get in, then I’ll give myself five years to make a career out of it. If I don’t get in, then I’ll go to law school.’” Her deal paid off. She left Oberlin for Juilliard, and “a year later, I was singing at the Met.”

Since then, Alyson has performed works by Puccini, Verdi, Mozart, and other composers; played the role of Julie in Showboat and Mimi in La Bohéme; won an array of awards; and worked in Europe as well as the United States. In spite of all this, she has retained the Sidwell Friends service-oriented mindset. She volunteers for a variety of charities and nonprofit groups, including the Humane Society, K9s for Warriors, the American Red Cross, and Sing for Hope, which performs free concerts at schools and hospitals. “It just shows you the amazing healing power of music—it’s why [musicians] do what we do,” she said. “Music makes the world go ’round. It’s the one thing that unifies everybody.”

Alyson encouraged the students to spend the rest of their lives learning and pushing for improvement, no matter how successful they might become. “I believe that as a musician, you are forever a student,” she said. “I’m always raising the bar for myself, and in order to get there, you have to keep improving. It’s all about perseverance and resilience.”