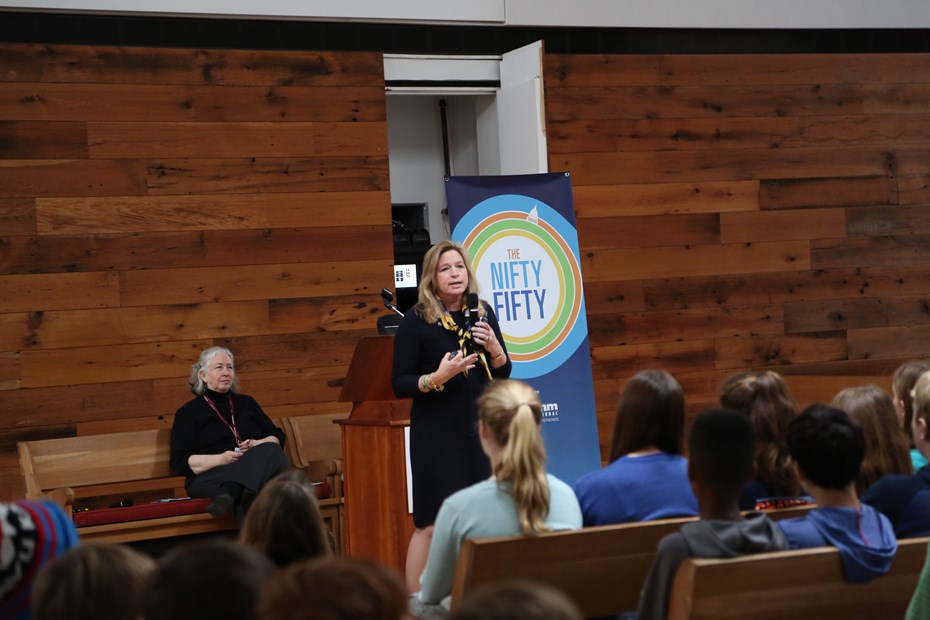 Ellen Stofan knows how to drive a point home with Middle Schoolers. When talking about heliophysics (the study of the sun’s effects on the solar system) and how huge explosions on the surface of the sun could knock out the communications and electrical grids around the world, the students are paying attention . . . but when she adds that during such an event, “your cell phones might not work,” a collective wave of dread ripples through the room.

That NASA’s chief scientist took time out of her day to meet with students underscores how the development of future astrophysicists is as crucial to the agency as its burning desire to answer the question of whether or not there is life elsewhere. “We need you to become scientists and help us figure this out,” she said. “And it’s so important that we get lots of different people to go into science, math, and technology. It’s mostly guys now. If we’re not accessing over half of our population [females, and people with “different colors of skin”] to solve these things, they’re certainly not going to get solved as soon as they could be.”

The life forms that NASA is looking for are a far cry from what people have long fantasized about. “If there were little green men out there, we would have found them by now,” Ellen asserted. “Small, noncomplex life forms are probable,” most likely “on a planet around a star where we think water would be stable.” Hopes are currently pinned on Mars, where water has been confirmed and which should have developed life around the same time that Earth did. After all, “life here stayed simple and in the oceans for well over a billion years,” she said. (Scientists have also not ruled out Jupiter’s moon Europa, nor Saturn’s moon Titan. Titan has an icy crust from a subsurface liquid ocean and actual rainfall, although the rain is liquid methane.)

“In your lifetime, you are going to see people walk on Mars, and you might be one of them,” said Ellen. In fact, President Obama has set the goal for astronauts to land on Mars in the 2030s. A number of achievements have to happen before this can be realized. Among them:

In addition to looking outward, NASA also looks inward to advance technology in ways that help mankind right now on Earth. For example, it works with the US Agency for International Development (USAID) by sharing its data to help solve problems in countries that don’t have scientists or computers. And it’s tackling some of the challenges posed by global warming: In California, where 30 percent of America’s vegetables come from, droughts have forced people to pull water out of the ground to water crops—and NASA satellites have detected a three-foot drop in the ground level. One goal is to find a way to refill this subsurface aquifer.

Ellen’s visit was arranged by the USA Science and Engineering Festival’s “Nifty Fifty” program, the mission of which is to bring young students into personal contact with renowned professionals in science and engineering and to build momentum in the months leading up to the Festival’s Expo on April 16 and 17 at the Washington Convention Center. During the free event, more than 1,000 leading STEM organizations will present hands-on science and engineering activities for people of all ages. For more information or to volunteer, go to usasciencefestival.org/2016-festival.html. To do what Ellen called “real science right now that helps NASA”—through activities and challenges, with prizes—go to nasa.gov/solve.

Q: Do you have a specific number for the probability of life?

A: This is so important to answer [and is the focus of the Drake equation]. We will have the ability to answer it in the next 20 years. You guys will know the answer in your lifetime.

Q: Did you see the movie The Martian, and if so, how realistic was it?

A: I loved it and have seen it more than once. A lot of the technologies you see are ones that NASA is looking at right now. What was unrealistic was [activity involving the] Martian soil—it’s chemically pretty nasty. You have to do something to clean it first.

Q: Would you go to Mars?

A: I’m scared to fly in an airplane. I went to a rocket launch as a child and it exploded. Being an astronaut is still a risky business. But if you told me tomorrow that I could go to Mars and start cracking open rocks and looking for life, I would go tomorrow. How many of you would go? (Half of the students raised their hands!

Ellen Stofan spoke about NASA’s current projects as well as aspirations for the future of space exploration. What really appealed to the audience of Middle Schoolers was the news of the search for extraterrestrial life.

Before, the idea of life on other planets was thought of as silly, or a fantasy solely made for commercial products. With today’s scientific knowledge, finding life on other planets is seen as extremely probable. Being so similar to Earth, Mars has always been suspected of harboring organic organisms; what came as a surprise to many was that moons were big candidates for organic organisms as well. Due to the fact that water is a key ingredient for life, moons Europa and Titan contain possibilities for life. The moon Enceladus has complex geological formations that hint at activity and possible life. Mars has flowing liquid water and Earthlike stability, making it a prime candidate for life and a future expedition.

The plan is to travel to Mars around the year 2030 and look for fossils. Since Mars receives a lot of radiation and has geological layers, there is a higher chance of finding fossils of microscopic organisms than active organisms. Ms. Stofan talked about the efforts going into this mission, including studying how human systems respond to microgravity, what plants are best for growing food where there is less gravity, and how to grow food during the voyage. At this point in her presentation, she was speaking to the audience as if they were the future astronauts and astrophysicists of this project, because we are. She portrayed a feeling of hope for aspiring NASA scientists in the audience. We felt believed in as well as informed.

As the assembly came to a close, Ms. Stofan said something that really resonated with many of us and affirmed what was sometimes hard to see from the standpoint of a young person in a big world: “You have to say to yourself, I belong. I can contribute. I’m going to send people to Mars.”