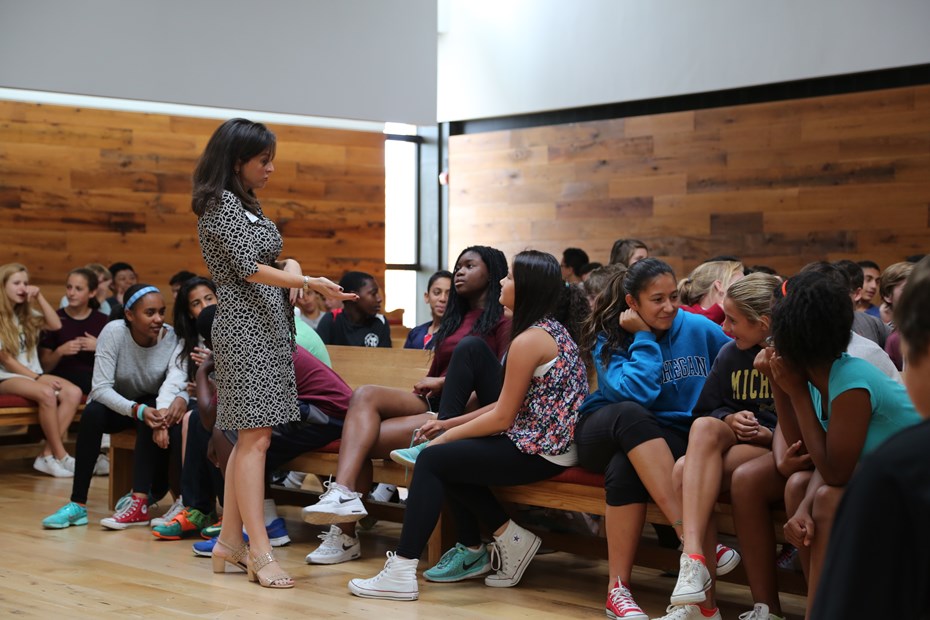 What is a microaggression, and what does chocolate have to do with it?

Seventh and 8th graders found out on October 9 when educational consultant Jen Cort presented at assembly. Jen began her talk by holding up a Hershey’s candy bar and asking who would like it. After she selected a student, she promised to give it to him at the end of the session. She placed it on the podium behind her and launched into an exercise for everyone to explain the concept of “social identifiers,” or the labels that they would use to describe themselves.

Jen had students pair up and share their identifiers with each other. They were told to consider gender, race, ethnicity, age, body type, religion, sexual orientation, and other factors.

Shortly afterward, she had them repeat the process using social identifiers that they did not get to choose—in other words, labels that someone else might ascribe to them.

Next, Jen explained the concepts of inclusive and exclusive behaviors and what they look like when used with others. In our interactions with others, Jen explained, “being really inclusive doesn’t happen all that often, and being truly exclusive doesn’t, either.” The middle represents the kinds of interaction most likely to cause confusion and hurt—in other words, a microaggression. The most common kind of microaggression is saying something that sounds mean—and then quickly following it up with, “Just kidding” or “I’m only joking.” The qualifier doesn’t make it hurt any less. Stereotypes can fall into this category, Jen said.

“What are some stereotypes about Middle Schoolers?” she asked students. Answers included sarcastic, self-conscious, moody, gossipers, and even “all Middle School girls like Justin Bieber.” These things may be true about us some of the time, but not always, she noted.

“Now, turn to the person next to you and name one microaggression that you have seen or heard about one of your social identifiers. What does it sound like? A stereotype. Does the hurt go away if someone says, ‘It’s just a joke’?” she challenged.

The resulting uncertainty can be very uncomfortable. “You still want the friendship, but you’re not quite sure what to do about it,” said Jen. She harkened back to the chocolate bar, which she had “accidentally” knocked off the podium and repeatedly kicked around on the floor throughout her talk. Did the student still want it? (For a moment, he wasn’t sure.)

“Now imagine that your friendship is like this candy bar. You begin to feel kicked around.”

So, when faced with what sounds like a microaggression, what should be done? Speak up, she advised. “If you don’t say, ‘That bothered me,’ it can build up.”

And if you’re on the receiving end of someone telling you they were hurt by something you said, recognize that it’s up to you to change. And, she added, “If you have to say ‘just joking’ or ‘no offense’ or ‘LOL,’ you probably shouldn’t be saying it in the first place.”

We have all used microaggressions at some point—“It’s part of being human,” Jen said. “But if you’re not willing to listen and stop when you are asked to, you’ll end up with broken friendships, and you’ll be on your way toward being a bully.

“You have a social contract with each other and with your teachers,” Jen said. “Make sure you are giving each other your whole self, your best self. You should expect more, and you should create an environment where you give more. That’s why I’m not giving out the broken candy bar,” she said as she handed a new one to the student to whom she had originally promised it.