Run to the Waves 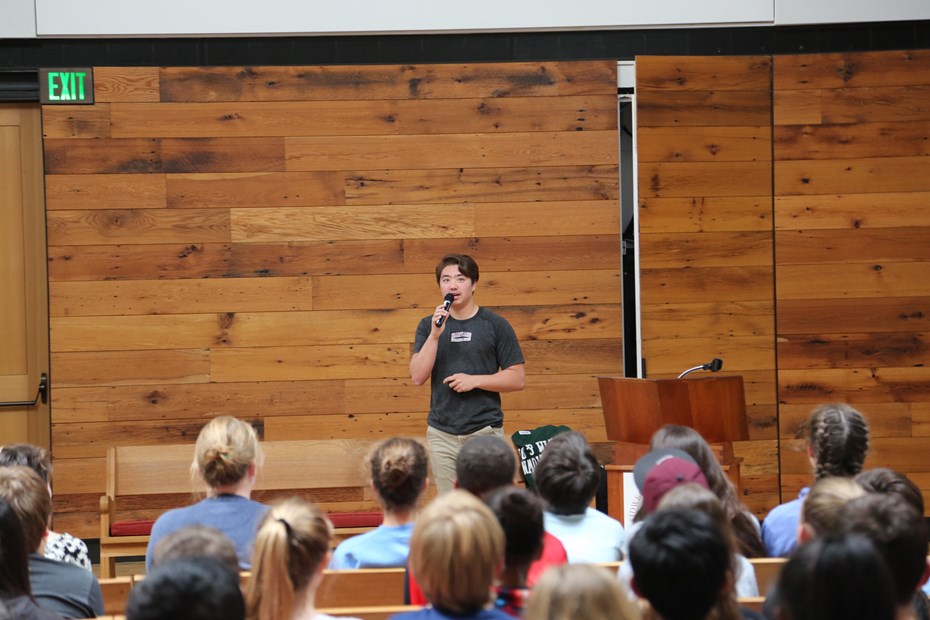 He doesn’t need to read the news about raging bathroom controversies—Schuyler Bailar has lived it. And he’s made his own news as well, as the first transgender athlete to compete on any NCAA Division I men’s team. The Harvard freshman shared his story with a group of US students, at a MS assembly, and at an evening presentation for SFS and Georgetown Day School parents on Wednesday, May 18. He kicked off both of his student talks the same way: “I’m much more nervous talking to you than I was before being on Ellen or 60 Minutes. It means much more to talk to students about what was missing in my life.” What was missing, he shared, was the sense of living who he was, leading to a host of mental health issues, including an eating disorder. The well-spoken young man gave no hint of that troubled teen—he was straightforward and honest about his journey. “The happiness I feel today,” he said, “is light, new, genuine.” The stops on that path included being a “tomboy,” the only word he knew to describe the feeling he had had since he was 5, and getting all “girly” when he tried to conform in high school (GDS, Class of ’14). An award-winning swimmer, Schuyler was tops in his school league and local club, with national accolades; his grades were good enough to get accepted to Harvard and to compete on the women’s team. He had many of what he calls “paper successes,” those top accomplishments usually checked off in high school. What was not high up on that list was happiness.

As a girl, he experienced outside validation, he says, “being called pretty and smart.” But, he goes on, “I was terrified that I was losing myself.” A post-high school gap year spent in therapy allowed him, as he put it, to “rip myself apart before I could build back up” to be the strong advocate—for himself and other trans people—that he is today. Fun Fact: Schuyler’s tattoo says, “I believe in pink.” The Audrey Hepburn quote, for him, means living in between the purity and clarity of white and the anger/passion of red.

Schuyler uses poetry to express his feelings. The piece “Dear Little Schuyler” (below) offers advice to his younger self and others—it’s hard sometimes, but, he affirms, “you’re a strong swimmer.”

The unending questions from both the US group and the broader cross-section of MS students were open and intriguing; they were clearly inspired by both Schuyler’s openness and his bravery in confronting his personal struggles. He talked about the support of his parents and coaches, “bro culture,” and no longer feeling unsafe walking down the street; he didn’t want to talk about surgeries (“There’s a reason they’re called private parts,” he noted.)

Schuyler’s visit was arranged by Philip McAdoo, Sidwell Friends’ Director of Equity, Justice, and Community, who said, “Gender identity and sexuality are natural forms of expression. Schuyler Bailar represents our commitment to continue to provide experiences that affirm our students. We are grateful that our Middle and Upper School students had the opportunity to hear Schuyler’s story as we think about how we can best support transgender and gender nonconforming students to comfortably live their lives. All people have the right to determine their own identities and expressions and be respected and affirmed in their determinations. That acceptance is implicit in our values as a Quaker institution.”

Schuyler invited all to follow him on social media (Twitter: @SB_pinkmantaray; Instagram: @pinkmantaray; e-mail: SB.pinkmantaray@gmail.com), where he works out daily challenges by “putting a strengthening spin” on them. He also encouraged the students to put “learning to understand yourself” at the top of any to-do list, regardless of which dilemmas you are facing. “Being human, being happy,” he reminded them, “is more important than any gold medal.”

I want to go back and tell you everything will be okay.
That you'll grow up to be exactly who you know you want to be.
You'll grow up to be exactly who you are. That the terror and the pain will fade.
But you were never afraid of the waves.
You must have known that things would get better because here we still stand, alive. And better.
So now, I hear you shouting to me from the depths of my insides, my history, my soul:
Run to the waves, Schuyler. The big ones, the little ones, the scary ones, the tiny ones. They're all different and fun in their own ways. Dive in. You're a strong swimmer.
Sometimes you'll wind up with sand up your butt and it'll really itch. And sometimes, you'll get a mouth full of the ocean--but didn't mom always say gargling salt water was good for you?
Anyways, the waves are kind and will always deliver you back to the shore; be patient, be flexible, and smile.
Dear anyone who doesn't think it can be better: listen to the little kid inside you. You can do this.