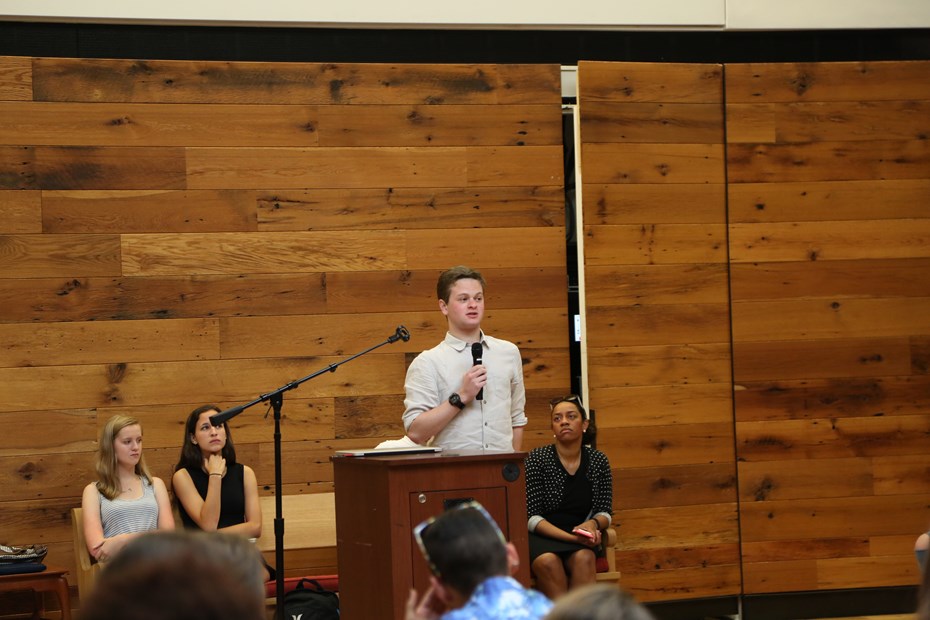 Good-natured ribbing from Oat editors aside (“Sleeping in until 12: Senior Project is reportedly going really well,” read a headline in the satirical newspaper), this year’s seniors proved that a lot of hard work goes into these monthlong deep dives into self-selected topics that both fascinate and challenge students in their final stretch of high school.

At a special Collection June 9, five seniors shared highlights from their projects to give the rest of the Upper Schoolers a peek behind some of the many different educational doors they’re welcome to open when they themselves are ready to graduate.

Before they began their talks, faculty advisor Jane Alexander told the seniors how impressed other teachers were with the work that was shared with them during the senior panels in which they presented their work to faculty and fellow students.

First up with a demonstration: William Choi, whose individual project was writing three short stories in a historically inspired, “low fantasy” world—one he described as being about a murder and having “no elves, no magic, and everyone dies at the end.” (His audience, naturally, laughed at this description.) He appreciated how the senior project time allowed him to more fully develop something that he had been “playing around with” for three years.

Clay feat
Next was Ethan Sapir, a filmmaking enthusiast, talking about his five-minute Claymation movie (students got to see a portion). He gave a nod of gratitude to computer science teacher Darby Thompson for suggesting that he try the stop-motion technique for a change. This approach, combined with shooting and giving voice to clay figures that he sculpted, gave him the ability to have “ultimate control over everything” rather than having to ask others to spend their free time acting for his project. He began by researching how to write stories for the screen and how to do Claymation. Once his script was done, he created backgrounds for the scenes by photographing different rooms and printing out the images; sculpting the characters (wire-bound, to make them stand), despite having “no experience with clay or physical art”; and spending many “painstaking and arduous” hours in his basement shooting more than 1,000 pictures, one for each character’s every movement, and editing them together. (“Not the most fun I’ve ever had,” he admitted.) At the end, he gained another new filmmaking skill, color correction, before adding music and sound effects. At the conclusion of his presentation, he had one more sound effect to take into account: Hearty applause.

Stringing them along
For 13 years, Keelin Quirk honed her skills on the violin. What she had never done, prior to her senior project, was write music. She decided she’d compose a piece that reflected the styles of different composers, including Bach, Vivaldi, and—to push her boundaries—Bartok, known for his Hungarian folk music. She started off by researching each legend, and then learned how to work with music notation software, which would sound out her passages. She played parts of the piece for the audience in the software’s rendition, promising that “it sounds a lot better on an instrument.” Then, she delivered on that promise and played a recorded version of her bringing the piece to life, making evident to all that those 13 years paid off beautifully.

Off the beaten path
The only team to present, Emily Klineberg and Penelope Hoopes, gave a show-and-tell demonstration of their project, a “sense of place” about Washington, DC, that culminated in a photo blog with reflections. The heart of their work: For three days, in near constant rain, the pair Metro’d to each of the city’s eight wards to discover what makes the areas unique, “particularly the [wards] outside the ones we grew up in, to understand the city as a whole,” Emily said. “We’re both going to be living in different states in the fall, and wanted to learn more before leaving.” In each area, their “teachers” were art installations and street art; restaurants, cafes, and food trucks; statues and memorials; parks and recreation centers; and anything else that was suggested by the many locals they talked to along the way. Central to their quest was a search for the ways in which the strikingly different wards are all connected.

This is SFS
When Marwan Lloyd was in the thick of the college admissions process, he watched video after video showing student life at the schools. When he thought back to when he first toured Sidwell Friends and remembered how “it felt like a mini-college,” he had his inspiration for his senior project: a video for the SFS Admissions Office to show to potential new families. He started by posing a question to the staff: What do new students say is their biggest surprise once they start here? Their answer—“How fun the School is”—informed his approach. He filmed a random selection of students, who confirmed this with testimonies such as, “You can get overwhelmed with work, but there are so many times to have fun,” and, “I’ve met the best friends of my life.”

After Marwan played the video for students, Collection was over. Part two of Senior Projects day commenced in classrooms, where non-seniors got to enjoy more presentations that showed the range of seniors’ topics. The day capped off with Upper School Meeting for Worship and an ice cream party in the courtyard.

Here is a sampling of the other 123 senior projects completed this year:

Neeknaz Abari: Read The Brothers Karamazov while learning Russian; journaled and a wrote a reflection on the book.

Octavio Bruetman and Jeffrey Ross: Created a sports podcast that broke down sports stories that had a strong influence on popular culture.

Atessa Farzami: Interned at the Public Affairs Alliance of Iranian Americans, a nonprofit that focuses on Iranian-American diplomacy.

Jacob Honn: Interned at The Siena School, a middle and high school college prep school for children with mild to moderate learning disabilities.

Talha Jilani: Explored all things French in DC (restaurants, events, museums, films, and books) to experience the culture and language beyond the classroom.

Sandy Katz: Interned at a National Institutes of Health lab that conducts research to find therapies and eventually a vaccine for HIV1/AIDS.

Jordan Merlin-Jones: Gave a vocal performance for the SFS community

Danny O’Sullivan: Honed his skills in throwing and sculpting ceramics (despite a broken arm).

Tessa Reagan: Taught photography to 1st graders; compiled their photos into a photo book and blog.

Afia Tyus: Created ceramics as a method of conveying the variety of black intellectual experiences.

Jacob Walker: Designed a website dedicated to all things tennis.

Raina Weinstein: Through the Brookings Institute, worked with refugees and assisted researchers on refugee issues.

Jocelyn Wulf: Constructed a scale model of a medieval European castle, complete with blueprints and detailed descriptions of its components.