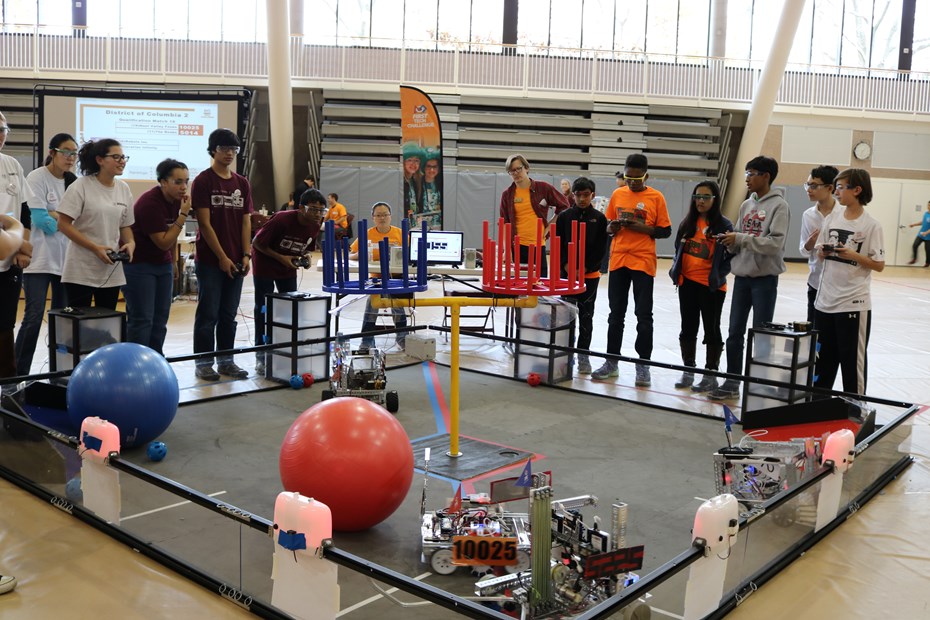 Robots may not have taken over the world yet, but they did commandeer the Athletic Center last weekend as Sidwell Friends hosted the Maryland FIRST Tech Challenge Qualification Tournament and fielded three teams from the Upper School’s robotics club.

Teams from 17 schools across DC, Maryland, and Virginia put their mechanical muscle to the test during different challenges on Saturday and Sunday. The SFS robotics team, which is still growing after its founding by Upper School Director of Technology Darby Thompson in 2010, entered three teams: RoboFoxes, Iteration Infinity, and SFS Rooks. Students on the SFS Rooks team are new to robotics, while those on the other teams are more seasoned competitors.

As hosts, team members spent Friday evening setting up the competition areas, with help from FIRST representatives, who made sure the fields and game elements met tournament standards. Although they didn’t compete until Sunday, the team showed their Quaker spirit by volunteering on Saturday. Club members made announcements and helped people get to their matches on time.

In this tournament, teams were divided into alliances made up of two teams each, so four teams competed at once. Players earned points by shooting balls through hoops, parking robots on ramps, or lighting the beacons on the sides of the field. They accrued penalties if one robot hit another or damaged the field. The three SFS robots were the culmination of months of hard work by the robotics team, from design discussions in September all the way to final test runs before the tournament.

Ultimately, the Iteration Infinity team earned a victory and an invitation to compete in States, the next level of the tournament. The other two teams will have another chance to qualify at a tournament in January. While excited about her team’s win, Jordan Kalai ’18 thinks there’s more to robotics competitions than doing well. “It’s nice to see other people who are interested in the same things I’m interested in,” she says, adding that she’s made many friends through robotics. “We have common ground right off the bat.”

But robotics isn’t just for people with programming experience. Jordan says there’s a place for everyone, and helping each other learn is a big part of what makes the team so special. For example, one team member who doesn’t like to code excels at organizing game plans, while others are passionate about design and building. She also knows a senior who joined the rookie team last year after becoming curious about the activity his friends spent so much time talking about. “Everyone brings something different,” she says.

Jordan believes the most important thing is to keep an open mind, as Iteration Infinity had to do when their robot struggled to carry the balls it needed to score points. Instead of giving up, Jordan’s team created a workaround, putting all their energy into lighting the beacons, which was enough to qualify them for States. “There’s a lot of failing [in robot design],” says Jordan, “but being able to learn from your mistakes and move forward is a skill that you can use in other classes. It teaches me to change my perspective, as opposed to shutting down.”