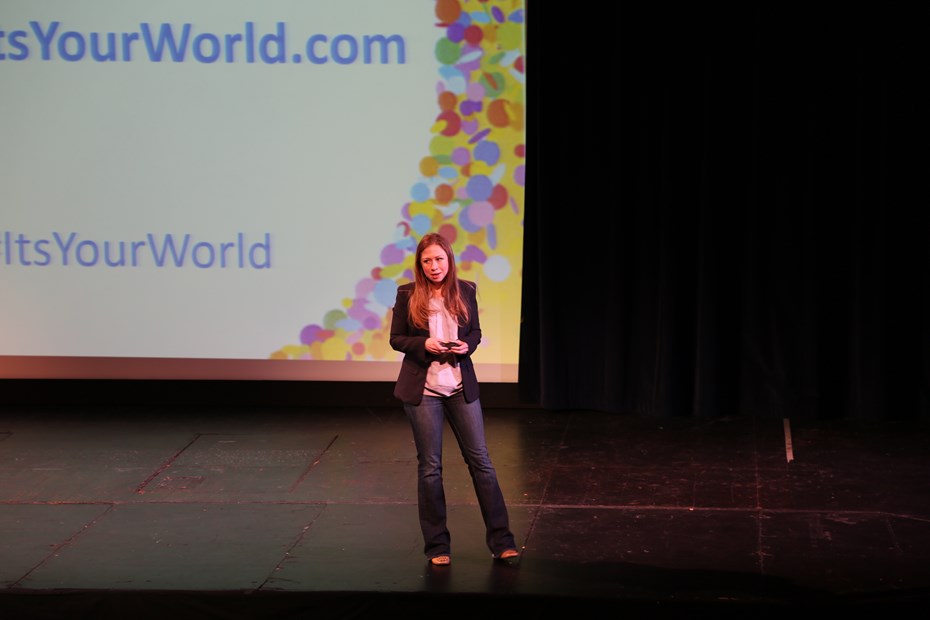 On September 24, the Caplin Auditorium was filled with Middle Schoolers eager to hear Chelsea Clinton ’97 talk about her new book, It’s Your World: Get Informed, Get Inspired & Get Going!

Chelsea takes readers on an exploration of the weighty problems facing the world and what governments and individuals are doing about them. And she encourages young people to bite off a piece of a problem facing society and do what they can to make it better, whether it’s cancer, hunger and homelessness, poverty, global warming, obesity, gender inequality, or something else. Chelsea shared several stories from the book about young people and the creative ways they tackled an issue that was tugging at their heart: There was Alex, a 6-year-old boy who collected leftover Lego bricks to make complete sets that could be donated to children in homeless shelters. And there was Haile, who was moved to tackle diabetes when her father was diagnosed with the condition: She started cooking healthier meals for her family, which led to an online cookbook, which then led to Hyatt Hotels hiring her to create healthier versions of all of their kids’ meals across the country.

“What’s something we can do?” asked one 6th grader during a question-and-answer session at the conclusion of the talk. “Well, what do you really care about?” Chelsea replied. “Where we engage has to start with something we’re really passionate about, or are really angry about. And it’s up to us as adults to help you figure out what you can do about it.”

Age never stood in the way of Chelsea’s activist heart. When a student asked if she remembered when she first became “interested in saving the world,” she replied, “I don’t remember a time when I didn’t feel I had a responsibility to try to make a difference.” She recounted how she would cut up the plastic rings from soda six-packs so they wouldn’t strangle sea life, and even tried to enlist her neighbors in the effort. She helped start her elementary school’s first recycling program. And she told the story of how, at age 6, she wrote a letter to then-President Ronald Reagan before his trip to Germany and asked him not to visit a cemetery where Nazis were buried. “He still went, but at least I felt like I tried to make a difference,” she said, adding that she is grateful that her parents instilled in her the value of trying.

She encouraged students to “always ask—you never know what they might say, and the worst they can say is no.”

That Chelsea even knew about President Reagan’s trip to Germany likely could have come from an article she read in the newspaper—emphasis on she read. As an elementary school child, she was always aware “how remarkable it was to be able to read, particularly the newspaper. It helped me understand what was happening in the world locally or somewhere much further away. I no longer had to rely on my parents to tell me. I could form my own opinions.” (She credits her maternal grandmother, Dorothy, with helping her realize that reading and getting an education were achievements that were not open to “millions and millions of kids around the world.”)

Later, one book would have a lasting impact on the young Chelsea and eventually serve as one of the reasons she would write It’s Your World. It was called 50 Simple Things Kids Can Do to Save the Earth (Earthworks Group, 1990). The book “didn’t talk down to me,” she recalled. It was written as though “I was someone who deserved to know what was happening. It also empowered me with real suggestions. That was so powerful to me,” she said.

When asked what made her want to write her book, Chelsea cited the influence of 50 Simple Things and the fact that she couldn’t find one that she loved like that. She also pointed to her 19 nieces and nephews by marriage, and how “curious and engaged and attentive” they and other kids at this age are—more so “than adults often think you are,” she added.

The idea of a book crystallized in the fall of 2013 when she appeared on The Daily Show with Jon Stewart. She was talking about heart disease, cancer, and diabetes, and an editor reached out afterward with the idea of a comprehensive book unlike anything else currently on the market.

And a year and a half later, Chelsea Clinton ’97 became a published author.

Q: Do you have a favorite quote from your book?
A: It’s the last one in the book, from Gandhi: The future depends on what we do today.

Q: Would you ever run for office?
A: I hope that’s a question that everyone would ask of themselves. Ask whether you think politics is the way to advance the world. . . . It’s Your World is not political, but it recognizes that who holds office really matters in cities and in the country.

Q: What was Jon Stewart like?
A: He is one of the smartest people to ever interview me. I remember thinking, I shouldn’t try to be funny, because he’s much funnier than I am.