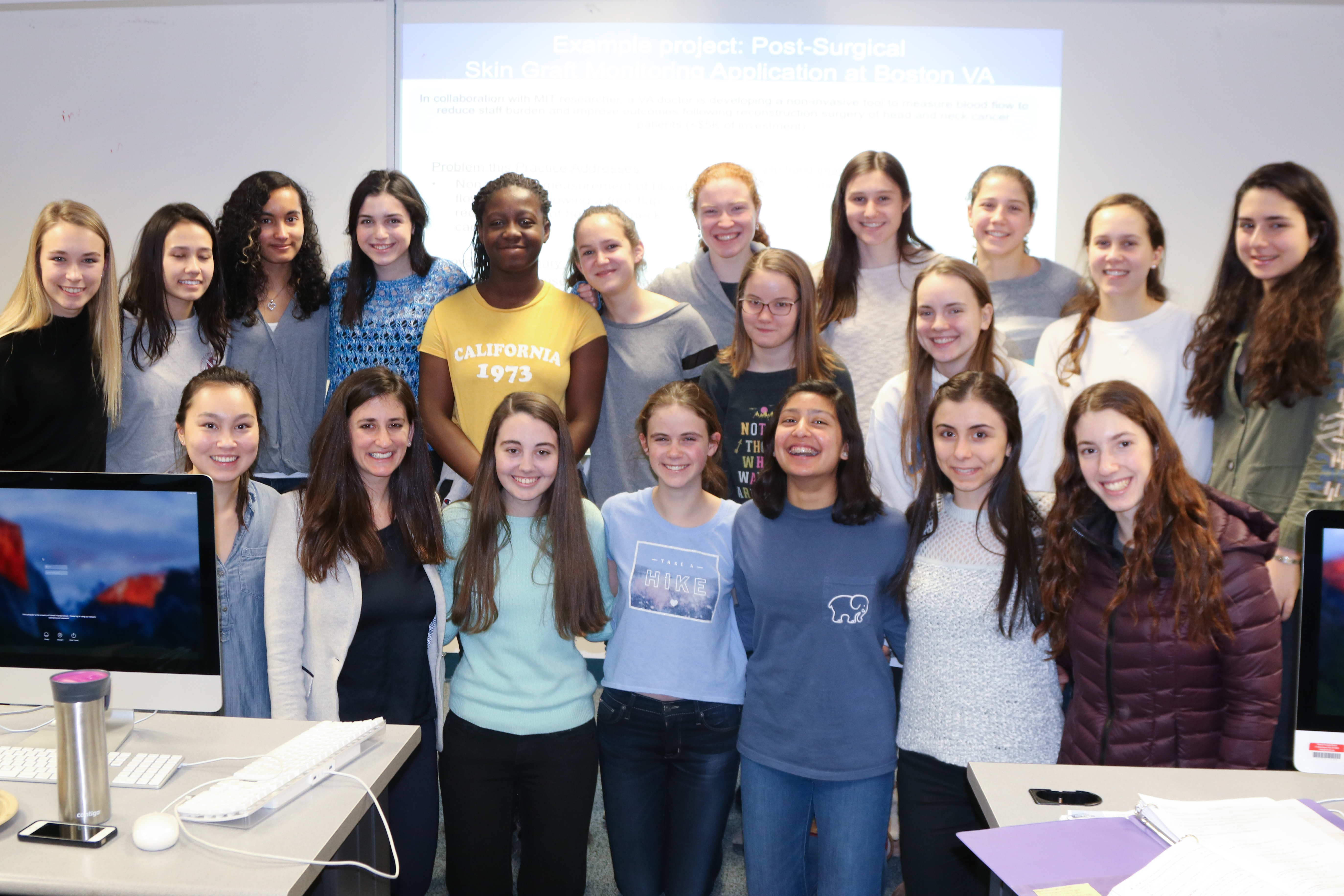 Over roughly the last 10 years, Andrea Ippolito has fabricated kidney tissue, developed a method to coat stents inside blood vessels with cholesterol-dissolving drugs, worked on pacemakers and on diabetes prevention, and devised a method to help sick patients better manage the many pills they take. She even built meniscus (knee cartilage) from a human ear grown underneath the skin of a mouse. Andrea and the team members with whom she collaborated on these endeavors have improved, and even saved, countless lives.

Yet Andrea has never spent a day in medical school. An MIT-trained biomedical engineer, she says her profession is a natural fit for someone who grew up soldering and building electronics (her parents are both engineers) and who dreams of one day helping paralyzed people learn to walk again.

When Andrea spoke to a group of mostly female Upper School students last week about pursuing careers in STEM fields, she didn’t have to work very hard to press her case. Her audience was made up of the inaugural members of the SFS GRIT Club, which stands for Girls Rising in Technology.

To Andrea’s surprise, most of the students at this first club meeting were 10th graders, as is the group’s founder, Emma Passmore ’19. Faculty advisor and Upper School Director of Technology Darby Thompson was also surprised by the larger than anticipated attendance. Both are encouraging signs that the number of women pursuing STEM professions will continue to grow. Students were heartened to hear from Andrea that half of all biomedical engineers are women. (Women engineers are drawn to this arena because, she notes, “they tend to be more empathetic” than men and more interested in careers that involve helping people.)

GRIT members were also intrigued by how much versatility Andrea’s engineering education has afforded her—although the amount of work that went into her training was not lost on them. With multiple advanced degrees from Cornell and MIT under her belt, Andrea now works as a Presidential Innovation Fellow at the Department of Veterans Affairs, devising innovative ways to solve complex, system-wide healthcare challenges.

Regardless of which branch of engineering students pursue, said Andrea, they will face many challenges, starting in college. Courses can be “really tough,” she noted, but the key to navigating undergrad and postgraduate studies is to take advantage of the teamwork inherent in all engineering education and professional work. “Whenever you hit a problem, lean on your fellow engineers,” she said. “I felt like my diploma should have had 10 names on it.” Equally critical, she added, is coaching and mentoring other students who are struggling, too.

She also recommended that students join clubs and groups geared toward their future careers. At Cornell, Andrea was a leader of several engineering-focused groups, which helped her deal with stress, develop public speaking skills, prepare a top-notch resume, and even find jobs.

Some in the room might have been surprised by one of the groups Andrea joined: a sorority. While it was for purely social reasons, it was also strategic. “I wanted to meet non-engineers,” she said. This decision to expand her circle of influence is something Andrea urged GRIT members to keep in mind when selecting a college. “You can get science and engineering at a liberal arts college where you will meet different kinds of people, or go to an all-engineering college where you will likely have more resources” but a more limited cultural environment, she noted.

Andrea’s strongest pieces of advice, though, involved something the GRIT club can start doing right now. “You need to do a GRIT Hackathon!” she exclaimed. At MIT, she loved the “hacking medicine” events where participants worked on problems such as how to prevent diabetes and how to eliminate the problem of “no shows” at the doctor’s office. The healthcare technology corporation Athena Health even bought a company based on a prototype that Andrea and colleagues created during a hackathon. Outcomes such as that are just one reason Andrea says being a hacker is an “engineering badge of honor”—and just plain fun!