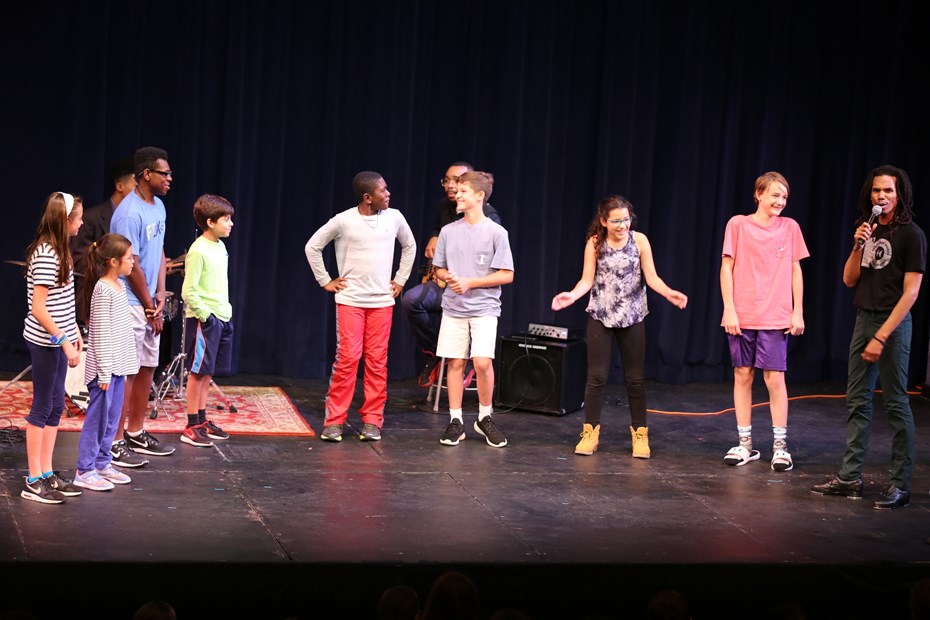 With feet, arms, and dreadlocks flying, Joseph Webb slid, skittered, and stomped across the Mary Ellen Caplin Theater stage to make the metal taps on the bottom of his shoes sing out. Behind him, musicians on the bass, drums, and keyboard laid down an uptempo jazz number that inspired Joseph as he improvised each step. And in the audience, several hundred Middle Schoolers were feeling the groove as this performance of Dancing Buddhas got under way.

Part entertainment, part music class, the act brought a bit of Broadway to Wisconsin Avenue during assembly: Joseph’s tap-dancing talent earned him a spot under the neon lights as part of the Tony Award-winning show Bring in ’da Noise, Bring in ’da Funk. Students could no doubt appreciate this part of his extensive dancer/actor/poet/educator resume, given the large number of hands that shot up when he asked if any of them had ever taken tap lessons. (His appearances on The Tonight Show with Jay Leno, The Oprah Winfrey Show, and Live with Regis and Kathy Lee, as well as his role in Martin Scorsese’s Bringing Out the Dead, likely resonated more with the faculty members and staff in attendance.)

Joseph quizzed the audience on musical terms and demonstrated how a tap dancer can not only mimic the beat of the music but can sound out the melody: Students were surprised when they clearly heard him tap “Mary Had a Little Lamb.” He also shared some names of jazz masters they should check out further, including Charlie Parker and Wynton Marsalis.

Later in the show, tap shared billing with hip-hop and breakdancing when Joseph brought fellow artist Devonte Wallace out from behind the curtain to demonstrate these dance styles. From his stomach to his elbows and even the top of his head, Devonte’s whole body got in on the act as he bent, flipped, and balanced to the beat of the band. Eight students then volunteered to get up on stage and show the audience their own moves. This time, it was Joseph’s turn to be impressed.

For more on Joseph, including upcoming performances and his American Embassy of Dance academy here in DC, visit thehotexperience.com and jwebbmedia.com.