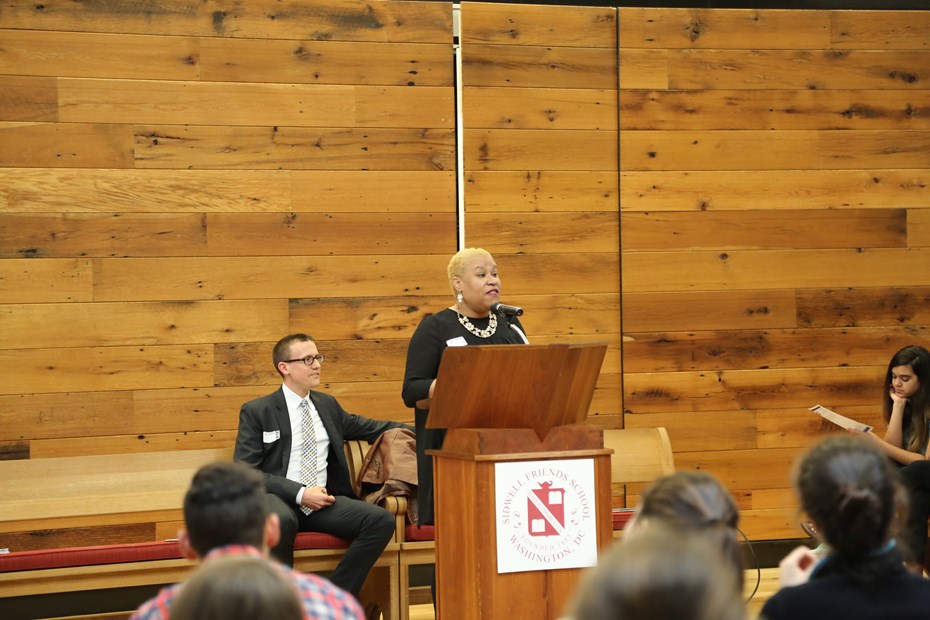 Because Guam is 14 hours ahead of the East Coast, the US territory has embraced the slogan, “Where America’s day begins.”

Because American citizens in US territories are not allowed to vote, Neil Weare—who grew up in Guam—prefers the slogan, “Where America’s democracy ends.”

When Neil turned 18, he had to register for Selective Service (the draft). “But I couldn’t vote for the Commander-in-Chief,” he told Upper School students at Collection last Wednesday. An internship with Guam’s non-voting delegate in Congress honed his focus; Yale Law School then gave him the know-how to do something about it.

With the ability to deploy litigation and grassroots organizing, he launched the We the People Project (equalrightsnow.org), an organization promoting the idea that all Americans—including the five million living in territories and the District of Columbia—should have equal rights and representation, wherever they live. Being active in the political process is key to bringing about change. In the legislature, he said, the inherent “dysfunction” is aggravated by “political horse-trading . . . . If you have nothing to trade, you get a seat at the back of the bus.”

His first legal case involved an American born in Samoa. The inside of this person’s passport was emblazoned with the words, Not US citizen. A current, bellwether case he is spearheading is benefiting from the support of other attorneys whose experience includes having made more than 150 arguments in front of the Supreme Court. Neil is “optimistic” that the Supreme Court will agree to hear the case.

And in case lawmakers are not inclined to take the cause to heart, Neil points out that residents of territories “are swing voters!”

Before turning the floor over to a colleague who is also fighting for the politically disenfranchised, Neil encouraged students to get involved. “We can serve as ambassadors to people who haven’t heard about this,” he said, adding that they can also sign a petition at equallyamerican.org (and via Twitter @equalnow).

Through the organization DC Vote (dcvote.org), founded 18 years ago, Kim Perry uses her energy as a former cheerleader to advocate and educate the 670,000 people living in the District of Columbia about a legal system that treats them as what she called “second-class citizens.” It not only denies DC representation in Congress, but also (until this year) control of its own budget and voter-approved laws, which continues.

“This is unheard of—no other jurisdiction in the country is subject to this oversight,” she said.

Efforts from litigation to a constitutional amendment have been employed but failed, with the issues “punted back to Congress each time.”

She noted that the 23rd Amendment “gave us the right to vote for president . . . and in 1971, we got a delegate to Congress—but they can’t vote” on legislation. “They can be on committees and vote there, but not on the floor,” she clarified. The voices of the people of DC “are completely silent.”

In December 1973, The District of Columbia Home Rule Act was passed, returning certain powers to local government. But the measure was far from freeing. “Congress said, ‘We’ll put you in charge of leadership for the city budget, but we still have to approve it.’ This may seem harmless, but it plays out in a very negative way.” DC Vote does have one significant reason to celebrate: As of last month, after court battles, the Superior Court ruled that “our local tax law is the law of the day. This is the first year in history that we will put together a budget and spend our own tax dollars . . . without congressional approval.”

The ability for the District to uphold voter-approved laws remains nonexistent. In 2014, nearly 70 percent of DC residents voted to legalize marijuana. “It was the will of the voters,” Kim said, “but Congress overturned it. Democracy was undermined,” and “it wasn’t the first time.” Similar rejections were handed down by Congress in the way of policy riders aimed at abortions, needle exchange programs, and gun laws. “Congressional oversight,” she stressed, “impacts us all.”

Besides the self-interests of Congress, Kim explained that one of the biggest barriers to “finally being part of the establishment” is that “most people don’t know we are disenfranchised. Most people [elsewhere in America] couldn’t find DC on a map.” They also don’t know that “real families like us live here”—not just fly-in, fly-out legislators and faceless agencies. “We’re an American community just like folks in Indiana and Ohio and Montana.”

Kim emphasized that “we don’t want special treatment, just equal treatment. This is geographic discrimination.” But she ended on a positive note.

“Our time will come.”