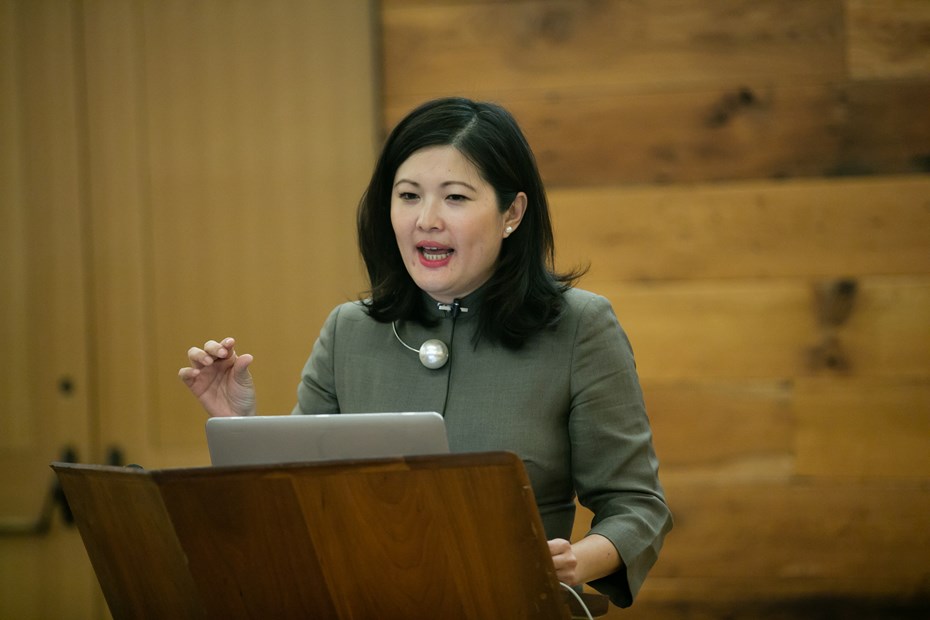 The restrictions on family size originally were contrived so that the country’s resources would stretch among its many people. Enforcement efforts included ruinous fines and compulsory abortions and sterilizations.

Mei’s analysis of China’s “failed attempt at social engineering” lies at the heart of her book, One Child: The Story of China’s Most Radical Experiment.

As the fifth of five daughters who grew up experiencing family members’ distinct preference for males—the nearly universal desire (and orchestrated outcome) in one-child China—Mei’s personal familiarity with the topic augments what she brings to it journalistically.

After graduating from the National University of Singapore, Mei started her journalism career as a reporter at The New Paper. In 1999, she moved to the United States to attend Columbia University; she then joined The Wall Street Journal. She won a shared Pulitzer for her stories on China's transformative process. Third-generation Chinese, she was born in Kuala Lumpur (where learning Cantonese was discouraged) and is believed to be the first Malaysian to win a Pulitzer. Her stories on China's migrant workers won a Human Rights Press Award from Amnesty International and the Hong Kong Correspondents Club, and awards from the Society of Publishers in Asia and the Society of Professional Journalists. Mei is currently a fellow at think tank New America.

The author, who spoke at Upper School Collection before the evening lecture, was introduced in the Robert L. Smith Meeting Room by Bill Bishop ’86. Bill is the parent of twins attending Lower School and the co-founder of the School’s new Parents of Asian Students organization. Fluent in Mandarin, he is the co-founder of CBS Marketwatch and publisher of the Sinocism China Newsletter. From 2005 to 20015, he lived in Beijing, where Mei and her husband were his neighbors.

Just before Mei’s book was published in February, China announced a new, two-child policy to fix the challenges it is now facing from the one-child edict: too many elderly citizens, not enough workers, and a glut of lonely males with few women to marry.

With fewer workers, the economy will be unable to grow at the same rate that has made China a global economic powerhouse. Also, the country has been sustained by a ratio of 514 working adults to every 1 retiree; within 20 years, said Mei, this will plummet to 1.5 adults per retiree. All of these elderly citizens will put extraordinary healthcare demands on the nation, particularly for Alzheimer’s care.

With dim prospects for marriage, the multitude of single males—as many as the entire population of Canada—will have to care for their aging parents and grandparents by themselves. They then face another dilemma: With no wife or children, who will take care of them in their old age?

In the face of the “huge marriage squeeze,” as Mei called it, parents have gotten creative with their efforts to find brides for their sons, from posting handwritten signs in local parks advertising their virtues to spending their savings on “bride prices,” the ever-increasing amount of money that marriageable women can command for agreeing to a union. Mei noted that even the Chinese equivalent of Google is appealing to parents by throwing singles’ mixers for employees with the hope that approving parents will encourage their sons to hire on or remain employed with the company.

The bleak outlook, pressure, and resulting bitterness have triggered a rise in suicides among men, particularly those who live in the isolated countryside. “Any way you slice and dice it, this is not the China we’re used to seeing,” said Mei. “They need more people now, desperately.” She believes the two-child policy “is a prelude to the lifting of family restrictions altogether.”

Each spring, Sidwell Friends hosts the John Fisher Zeidman ’79 Memorial Lecture, which brings to campus an extraordinarily distinguished group of experts on various dimensions of Chinese history, culture, and society. The lecture is named for John Fisher Zeidman ’79, a graduate of Sidwell Friends who became ill while studying in Beijing and tragically died. The John Fisher Zeidman ’79 Chinese Studies Endowment was established by his family and friends to perpetuate John’s belief that Chinese-American relations will prosper if students begin to study Chinese language, history, and culture at the secondary level. The Zeidman Lecture is viewed as an important and valuable event within the larger China-interest community in Washington.

As he welcomed everyone to the event, Head of School Bryan Garman thanked John’s father, Phil Zeidman—who attended with his daughters Elizabeth “Betsy” Zeidman ’76 and Jennifer Zeidman Bloch ’85—for creating the endowed Chinese studies program “long before it was fashionable to do so.” (John’s mother, Nancy Zeidman, was unable to attend.) The program, Bryan said, is “one of the most distinctive features of the School” and has dramatically enriched the Sidwell Friends community.

You can learn more about Mei by visiting her website at www.meifong.org and following her on Twitter @meifongwriter. You can view images of the evening here.