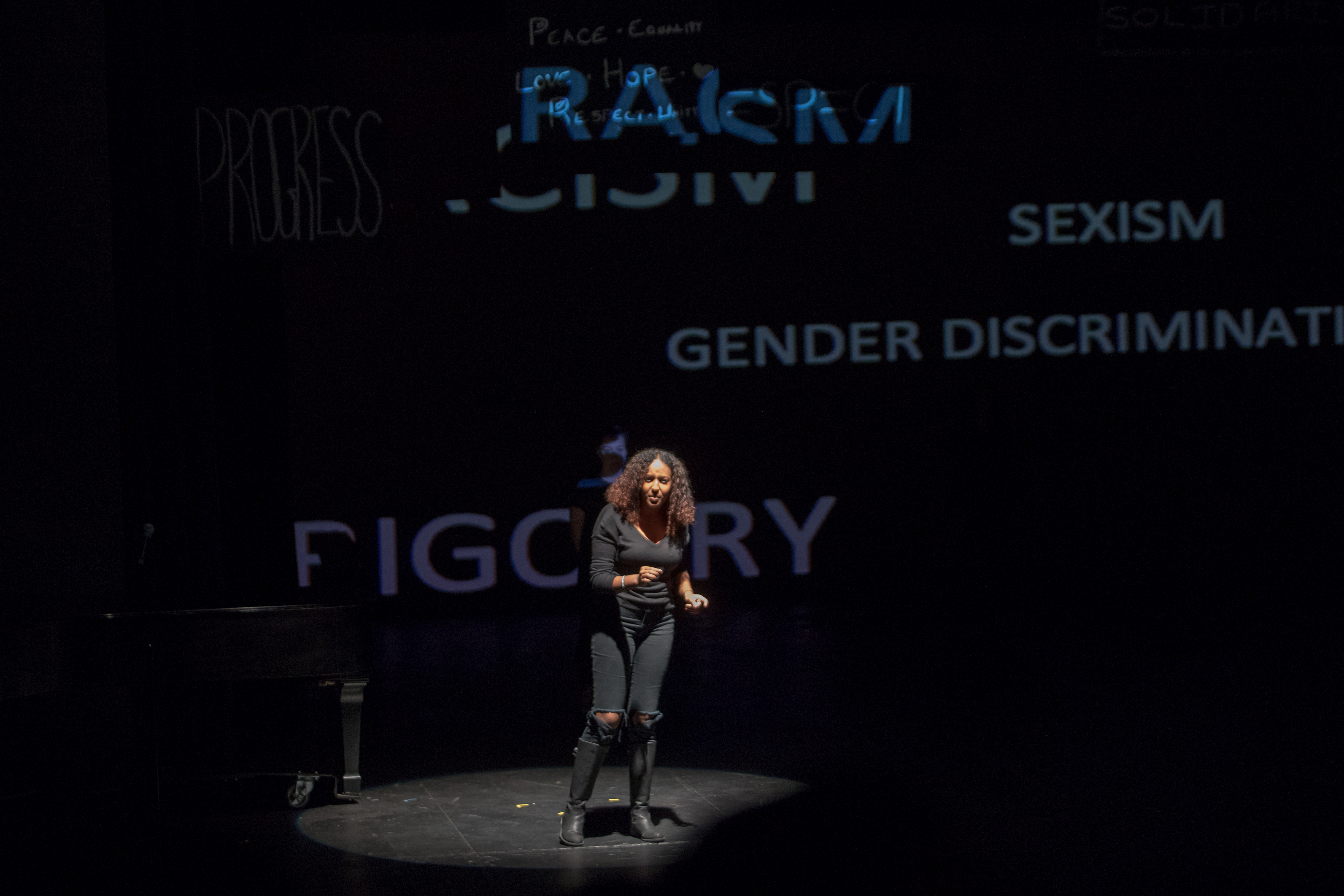 Boys are smarter than girls. Black people can’t go to the same school as white people. Boys can’t do ballet. You can’t be African American and Caucasian at the same time.

Lower Schoolers stood onstage in the dimly lit Mary Ellen Caplin Theater on the night of the Black Student Union Production, speaking some of the lies often told about race, gender, and identity. The segment, created by the show’s youngest students, packed a powerful message: No one should be stereotyped. The students repeated the lies in low voices, hands clasped and heads down—but then stood tall, their faces proud and confident, when the time came to overwrite them with truth.

Girls are just as smart as boys! Black people can go to any school! Boys can do ballet—I’ve seen boys do ballet in the Nutcracker! You can be African American and Caucasian at the same time—I’m a living example!

The crowd of parents, alumni, faculty, and students cheered, impressed by the Lower Schoolers’ handling of these complex issues. And the enthusiastic reception continued, as students from all three divisions used their creativity to address a variety of issues important to and faced by African Americans and other people of color. Pride in black identity was a common theme in all the artistic expressions, from music and dance to monologues and poetry.

Michael Adeyi ’18 started off the performances with a piece he wrote about the current political climate and controversies involving the Confederate flag: “Thousands of people still tout the flag, claiming they’re just doing so because it’s their ‘heritage,’” he said. “How … can your flag be your ‘heritage’ if it was only around for four years? And if you identify it as your heritage, then you have to identify strongly with its ideals. … Anyone who tells you that the Confederacy did not exist to preserve slavery is wrong. The Confederate Constitution says explicitly that the right to own slaves will not be infringed upon.”

Later in the show, Middle School students performed Prince Ea’s spoken-word piece, “I Am NOT Black, You Are NOT White,” a poem that breaks down the “labels that will forever blind us from seeing a person for who they are.”

“Deep down, we were meant to connect and care for each other,” quoted Mackenzie T. ’23. “That is our mission, and that is not [just] my opinion.”

The acts that followed included a sing-along to Ziggy Marley’s “Love Is My Religion,” an original poem by Yalemwork Teferra ’17, a choreographed hip-hop dance, and a formidable recitation of the nonprofit group Get Lit’s “Somewhere in America.” Laughter and knowing nods rippled through the theater as Eden Negussie ’20 and Leyu Negussie ’20 performed Crystal Valentine and Aaliyah Jihad’s take on cultural appropriation, “Hide Your Shea Butter.” And Nia Baker ’19 put the cold ground of reality beneath the audience’s feet with her sobering performance of Ernestine Johnson’s “The Average Black Girl.”

The evening’s most powerful presentation may well have been the last, which involved the entire cast. Following a joyful dance to Alicia Keys’ “We Are Here,” the performers moved from the stage into the aisles to raise their voices to Janelle Monáe’s protest song, “Hell You Talmbout.” Students asked the audience to join them in reciting the names of people killed by police brutality in recent years, to ensure that they will never be forgotten.

In a talk-back after the show, performers were asked what it was like to participate in the production. Said one BSU member, “One of the beauties of the show for me and my friends: We have a lot of debates and discussions [in School], and there’s always something to counter [what we say]. We rarely get the chance to just lay it all out without rebuttal. So we feel comfortable putting ourselves out there” on stage.

Earlier in the week, after students in all three divisions got to see an abbreviated version of the production, cast members received the encouraging feedback that this year’s performance was particularly moving. One Upper School student shared that it made her “want to listen more.” That’s music to cast members’ ears. Said another BSU member during the talk-back, “We want [the audience] to step outside their comfort zones and do something” to fight injustice. Hearing the truth is a step in that direction.

Special thanks go to Pilar Lynch ’91, who once again shared her directorial talents with the group. Check out more pictures from the performance here.