“What I Saw Set My Soul on Fire” 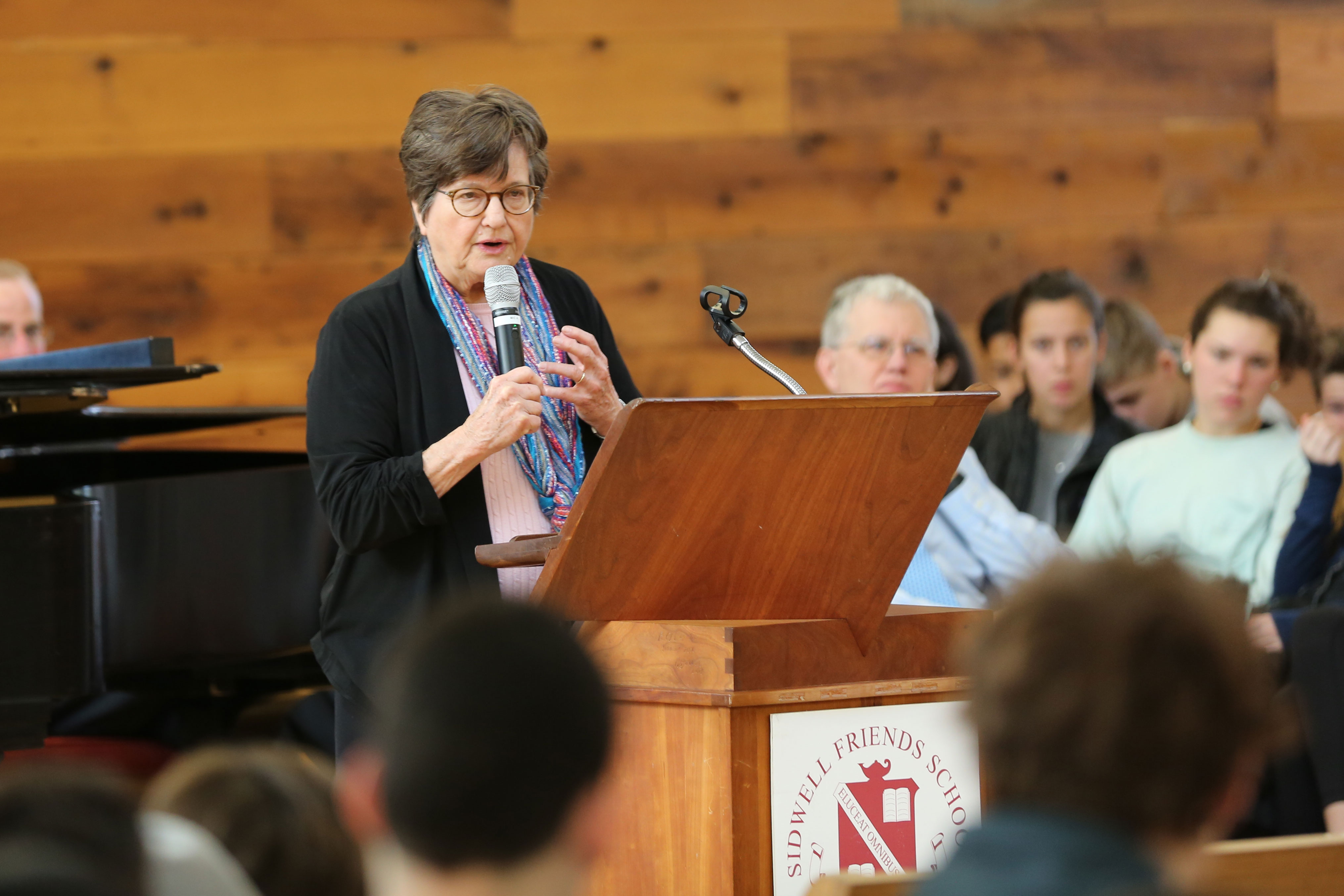 Prominent death penalty opponent Sister Helen Prejean has advocated for mercy in the meting out of justice for more than 30 years.

Upper School students spent Collection on February 6 hearing from activist and author Sister Helen Prejean, a Roman Catholic nun who has been working tirelessly to abolish the death penalty since the 1980s. Her book about some of her early experiences, Dead Man Walking (Vintage, 1993), and the 1995 film of the same name have changed the direction of the death penalty debate in the United States. She also founded Survive, a New Orleans advocacy group that works with murder victims’ families and tries to help them heal.

This year, the Washington National Opera is staging a production at the Kennedy Center based on Helen’s life. Pianist Michael Baitzer, Washington National Opera executive director Michael Mael, and Catherine Martin, who has previously played Helen with the Dayton Opera and will understudy the role in DC, accompanied her to Sidwell Friends. At the beginning and end of Collection, Catherine sang arias to preview the show and its message, emphasizing the importance of mercy in justice.

Helen introduced herself with a ready sense of humor: When History Department Chair Steve Steinbach jokingly mentioned that there is a SparkNotes guide available for Dead Man Walking, she quipped, “Don’t tell them that!”—but quickly got serious.

“I was raised in privilege, always taught to be kind,” she said. “But when I awakened to justice [I learned] it’s not enough to just be kind. Justice means you’ve got to get in there and change the system!” She spoke directly to the students’ experience at Sidwell Friends. “The fact that you’re being given this great education is a call to change things.”

Helen took students through her journey, from her days as a schoolteacher to the connection she developed with a death row inmate, Elmo Sonnier, and her decision to become his spiritual advisor as he awaited execution. Though she was appalled by the crimes he had committed, she “looked through that heavy metal grate [at the prison] and thought, ‘My God, he’s a human being.’” She visited him many times and was there at the moment he was put to death by electric chair. “What I saw set my soul on fire,” she said. “A fire that burns in me still.”

During a question-and-answer session, one student asked Helen if she opposed the death penalty in all cases, even for the most brutal crimes. “The problem is, who decides?” Helen answered. “You look at who fills up those 3,000 people on death row—who puts them there? What kind of people are they? [They are] all poor people—all people who can’t afford a good defense. You’re never going to find a rich person on death row. And the race and social status of the victim [are] determining factors. Seven out of 10 people on death row are there because they killed white people.”

Helen was careful to point out that the move away from execution is a difficult one. “The words in the Constitution about ‘cruel and unusual punishment’ are always the same, but people interpret them differently. What’s the difference? Culture! [People] say, ‘This is the way we do things in this part of the country; it’s the way we’ve always done it.’ But we’re moving to the day where we’re going to shut it down.”

As of this year, Helen has witnessed six executions and continues to counsel those condemned to death. “Is it about straight justice, or is it about mercy?” she said. “Everybody’s worth more than the worst thing they ever did in their life.”