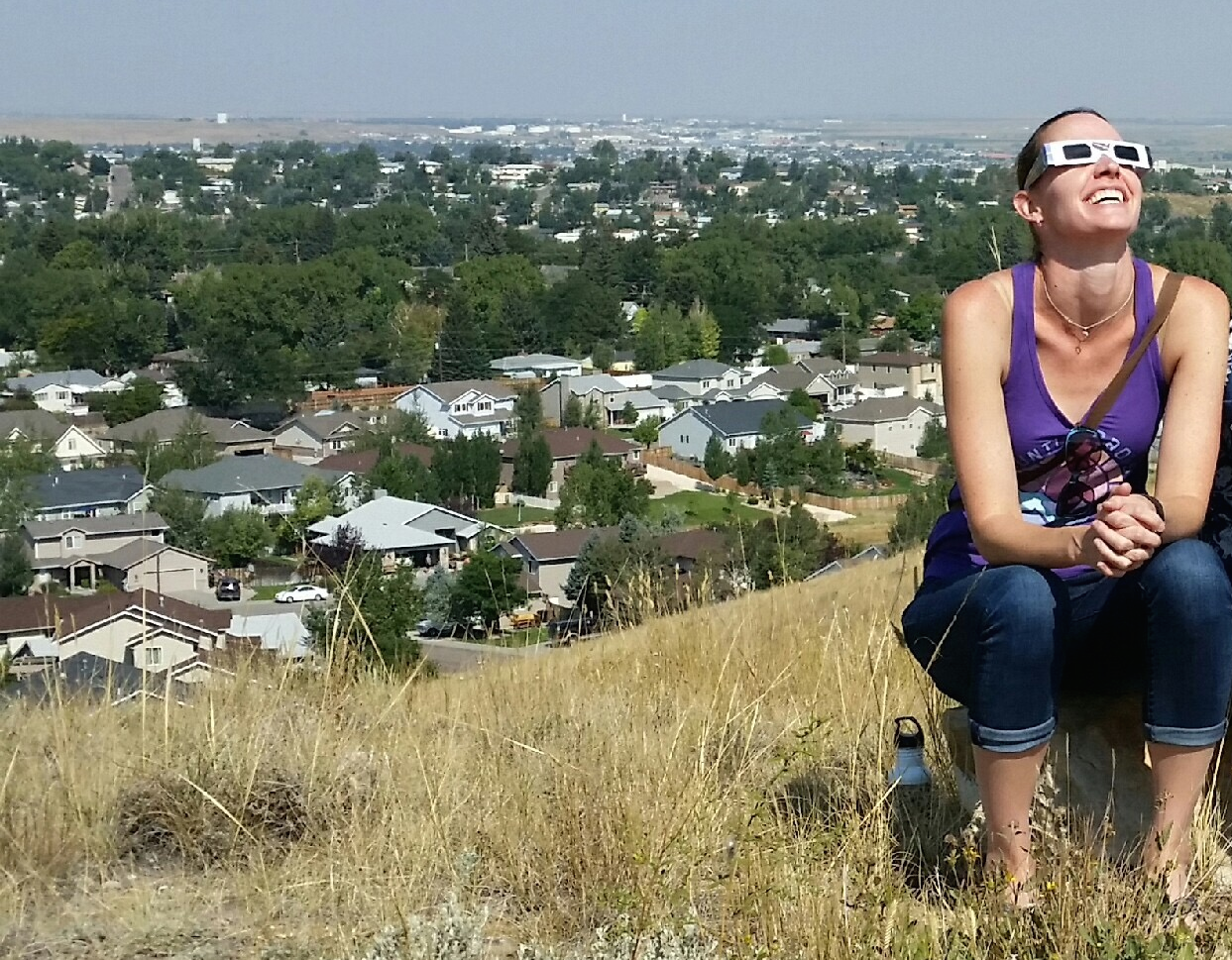 An Upper School science teacher travels to the path of totality.

I’d been looking forward to the total solar eclipse that took place on August 21, 2017, since I first heard it was happening, about three years ago. It is the first to hit the continental United States since I was born, though Hawaii had one in 1991. I’d long heard that if a total solar eclipse was a thing you could see, it was a thing you must see.

The path of totality cut across the country from coast (Washington state) to coast (South Carolina), hitting many major and minor cities along the way—thus, the moniker “Great American Eclipse.” So earlier this year, I made a plan to visit Casper, Wyoming, which was high on any list of best places to view the eclipse because of the generally clear weather at that altitude and time of the year. I was joined there by visitors not only from all across America but also from all around the world.

The partial eclipse began at 10:22 in the morning. I had scoped out a viewing site on a nearby hilltop, one of a dozen or so official viewing sites associated with the Eclipse Festival in the town. Eventually I was joined by a couple hundred others as the eclipse progressed toward totality, but seeing “first contact”—the moon’s first bite out of the sun’s disk—was exciting by itself, and I could tell from the little bit of shouting around me that the few other early arrivals thought so, too. During the next hour, I alternated between talking with my neighbors up there and just staring at the partially eclipsed sun­—through appropriate glasses, of course. One nearby group had brought a metal colander, the holes of which act as pinhole cameras that cast little crescents over the ground to show the current shape of the eclipse. Everyone around was able to enjoy that, and I had the chance to give a quick optics lesson to some lifelong learners.

Mostly I just sat and stared as the air got chillier. (The National Weather Service reported a total temperature drop of nine degrees in Casper during the eclipse.) As I watched the moon moving slowly over the sun, I tried to see them as they “really are,” one 390 times larger and 390 times farther away than the other. Our earthbound eyes are too close together to give any sense of depth regarding things that are farther away than a few thousand feet, so everything in the sky appears to be pasted on the inside of a gigantic bowl, all the same distance away. For me, at least, it requires some effort to make my brain accept this momentary alignment between the sun, moon, and Earth, separated by roughly 93 million miles, as it really is: incredibly precise, precarious, and special.

It’s a complete coincidence that solar eclipses can happen at all here on Earth. No other planets in our solar system, and relatively few in the rest of the galaxy, have this luxury. If the sun were a little bigger or closer or the moon a little smaller or farther away, we’d never have total eclipses. If the reverse were true, we’d have them, but it wouldn’t be such a perfect fit, so the sun’s corona would be hidden, too. Albert Einstein’s theory of general relativity wouldn’t have found its first evidentiary success in the solar eclipse of 1919 (thanks to evidence collected by the Quaker astronomer Sir Arthur Eddington), and “Einstein” might not have become a household name. (In fact, the moon is getting farther from the Earth, about 2 centimeters a year, and in a mere 600 million years, it will be too small in the sky to cover the sun completely, ending this glorious era of history.)

As the last bit of the sun grew slimmer and slimmer, I looked to the west and saw the mountains darken. I heard shouts, cheers, and even some shrieks from groups in the valley. As the last of the sun was obscured, I took off the glasses and saw the “diamond ring effect” for a moment, then a deep black hole in the sky, surrounded by a glowing corona. It was exactly as I had been told, exactly as the pictures all show, but somehow still completely surprising and surreal.

My hands shaking, I took a couple of pictures of the 360-degree sunset before I had to stop because I couldn’t hold my phone steady. I tried to imagine how our ancestors must have felt when the sun suddenly and unexpectedly disappeared from their skies.  With no explanation and no promise of the sun’s return, panic was the usual reaction, and it’s no wonder. We know better now, of course, though I still felt a little edge of fear along with the excitement.

After the two-and-a-half minutes of totality, the diamond ring appeared once again, and then the sun was back out. There wasn’t much vegetation on the hillside, so I didn’t get to enjoy the chirping crickets and singing birds that some hear during a total eclipse, but I did see a fox run across the hillside a few minutes after the sun reappeared, apparently confused at the shortest night it ever experienced.

I drove the short distance back to the house where I was staying and lay down in the backyard, staring up at the sun (through the glasses again), watching the moon retreat. Thin, wispy clouds covered it enough that I couldn’t pinpoint “last contact,” but I consoled myself with the knowledge that I’d be seeing another in about seven years (fingers crossed for clear skies in Dayton, Ohio!).

Julie traveled to the path of totality thanks to a Faculty Venture Grant, which support teachers as they research and develop new curricula.