Third Graders Go Back in Time

Quill pens and homemade butter are only the beginning of a school day spent in the 18th century. 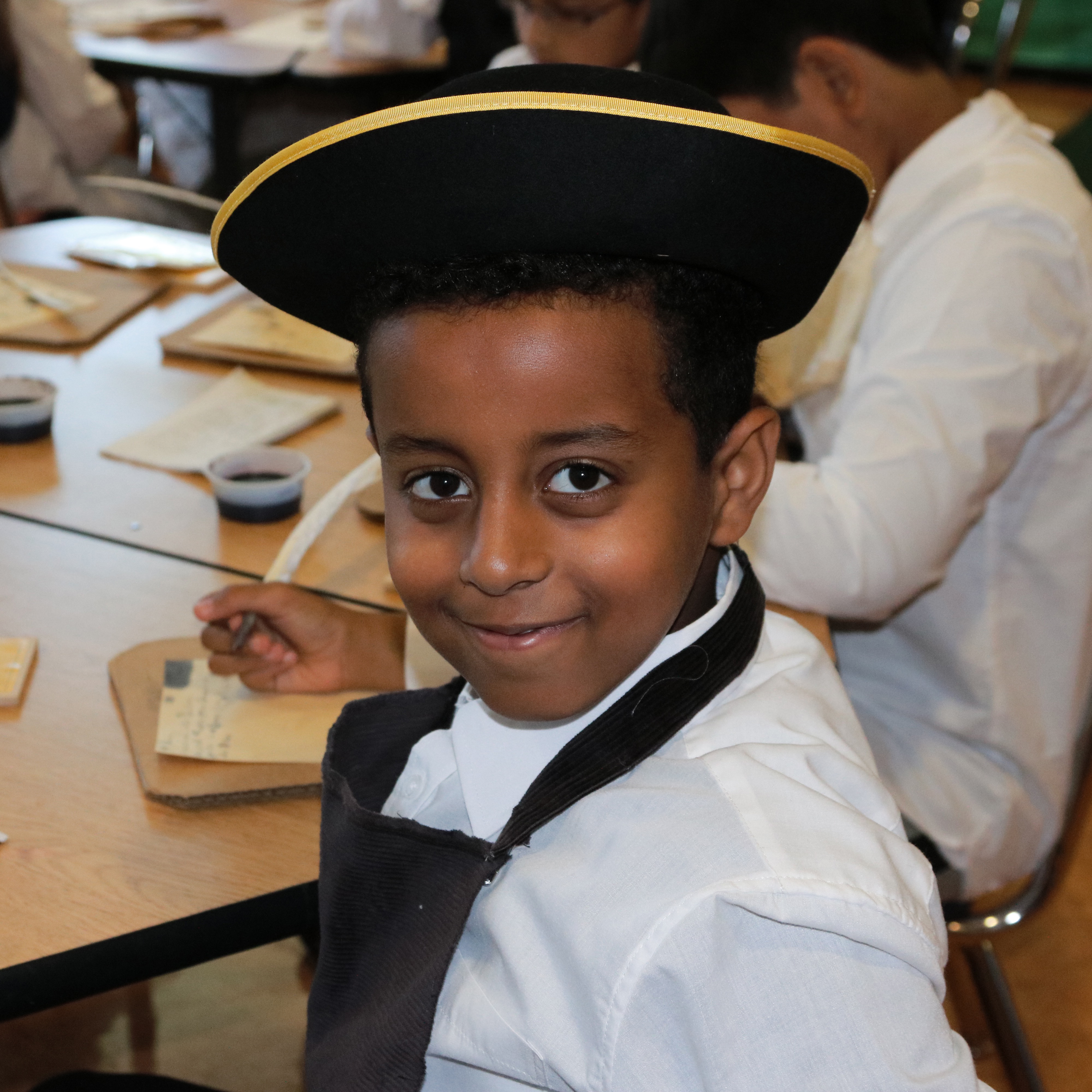 If you stop by the 3rd grade on a particular day in May, you could be forgiven for wondering what century it is. In one classroom, students are churning butter; in others, they’re playing traditional colonial games and learning to dance a Virginia reel. Outside, you might catch a glimpse of a student chasing after a wooden hoop, and you might hear another complaining of ink splotches on her fingers after a bout with a quill pen. All are clad in wigs and waistcoats, dresses and bonnets, and many even speak with a British lilt!

That’s because the 3rd grade celebrates Colonial Day every spring, when they learn about colonial culture in the best way possible: by living it.

“We do this activity after having gone on our [Colonial] Williamsburg and Jamestown overnight trip,” says Elizabeth Bacon, one of the 3rd grade teachers. “It’s the culminating activity of the year, because the focus of 3rd grade history is early American history. We start with Jamestown, transition to colonial times, and end with the Revolution. We chose these activities because they’re good for learning about colonial culture, but we certainly don’t shy away from more complicated issues, like the fact that while the founding fathers were fighting for their freedom, they had still not freed enslaved people.”

She adds that being able to simulate colonial life is a great way to make history seem real to students at this age. “What really makes history come alive are those tangible moments. Otherwise, it can seem so distant. The kids realize that colonial people were daughters and sons and sisters and brothers, just like them.”

Outside, the 3rd graders are experiencing colonial games firsthand.

“Who remembers what these are called?” asks teacher Franny Cannizzaro. She holds up two wooden sticks and a small hoop, which is threaded with ribbons.

“The grace game?” ventures a student.

“Right, the game of graces!” says Franny. “You’ve got two sticks and one of these hoops. You make an X shape with your stick, and then when you flick it, the hoop goes really far. It’s kind of like 1771 catch.”

Students soon discover that the game is harder than it looks. They have to position their sticks just right in order to aim the hoop at their partner, and catching it can be a challenge, too. Still, it doesn’t take them too long to get the hang of it, and soon they’re tossing the hoop back and forth from farther and farther away.

Back in the 3rd grade hallway, students are practicing their calligraphy skills with Gladys Daniels, who is instructing them in the art of using a quill pen.

“People back then had beautiful cursive handwriting,” she explains. “When they would pluck a goose or turkey for eating, they would save the quills, which they would cut to sharp points. It took people years and years of practice to get that beautiful handwriting.”

One student, Claire K., says she likes writing with a quill pen, but it’s also trickier than expected. “The feather splits,” she explains. “And it’s hard because the ink doesn’t always come out, and when it does come out, it splotches!”

Nearby, a group of students is having a similar struggle with a traditional colonial game, Mill Strategy, in Sarah Tiamiyu’s classroom. It’s a complex cross between tic-tac-toe and checkers, and winning can be difficult. “The game is quite competitive, but sometimes it’s easy,” says Lucas S. “If you have skill, and your opponent just goes for the attack, then [that makes it] easier.”

Meanwhile, Elizabeth Bacon is teaching students the Virginia reel. “It’s a dance that was brought over from its mother country of England,” she says. “Usually, it would have been done in something called a tavern. What’s a tavern?”

“It’s a place where you can sleep, and you can also eat there,” says Gracie B. “Like a mix of a hotel and Starbucks!”

“In colonial dance times, gender roles were very strict,” says Elizabeth. “You had this very gendered male side and female side—but today, we’re going to mix it up. It doesn’t matter if you’re on one side or the other—you can dance with whoever you want.”

The students get into their home positions, clap along to the music, and learn to do-si-do. It only takes them a few tries to master the steps, and then Elizabeth asks Liz Stoneham, the Lower School executive assistant, to watch them perform. Liz is highly impressed.

In another classroom, students are hard at work churning butter, a task that requires both careful concentration and muscle power. Teacher Noemi Rodriguez circles around and offers advice. “You’re almost there!” she says to a group of her students. “You’re doing great!”

Maina V., who has just finished, is busy slathering her freshly made butter on a piece of bread. She’s glad she doesn’t have to make butter for her family, the way women did in colonial times. “I think as a job it would be okay, but sitting inside the whole day would not work for me,” she says. “But I guess it would be a little fun. You’d get first dibs on the butter!”