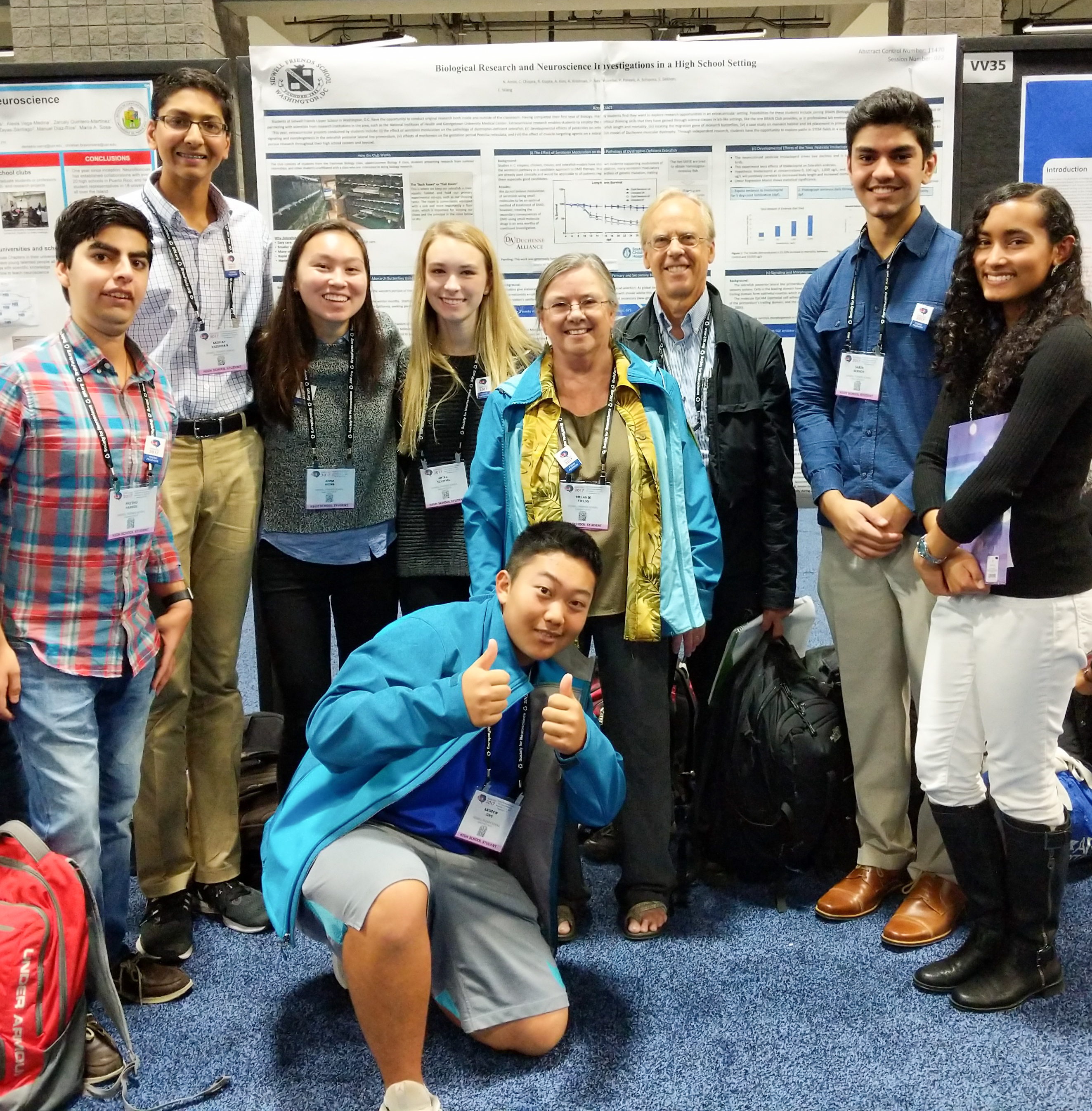 Upper School students find their way into the halls of science.

The halls of the cavernous Walter E. Washington Convention Center are overflowing with visitors—more than 30,000 of them—gathered for the Society for Neuroscience meeting. Past the dozens of symposia-filled conference rooms and the throngs of hobnobbing scientists is the convention center’s massive, 16-acre exhibit space. Descend into the sea of posters on display there, and you can’t help but be awed by the scale of the event, not to mention the vast endeavor that is neuroscience research today.

Down one row of posters on the far side of the hall is something else that might surprise you: a group of high school students gathered around their poster, explaining their work to fellow researchers who have stopped by to chat.

The scene might surprise you, that is, unless you’re Upper School science teacher Melanie Fields or one of her former students.

Since 1991, Melanie has been bringing young researchers to science conferences like this one, and on a chilly November weekend a dozen or so current SFS students are taking in the experience. That’s because Melanie has definitive proof of the validity of her own hypothesis: Exposing students to the real-life work and experiences of scientists makes students more likely to become real-life scientists!

By conducting independent research and presenting posters at scientific conferences, Melanie says, students “get to see how science is communicated, and they get to communicate science themselves.” Equally important, she adds, is “they find that when people come and ask them questions at their posters, they are really taken seriously and respected as research scientists themselves.”

For junior Noor Amin, the conference provides a chance to “get a better sense of the field in general and what kind of jobs are available.” Noor’s project focuses on monarch butterflies: “There are a lot of theories behind butterfly migration involving chemical markers and the like, the most prominent of which is that there’s a genetic memory that essentially describes innate behaviors that leads butterflies towards more southern areas during this time. I wanted to locate the exact gene that’s involved in that through a DNA microarray after I disturbed the butterfly’s magnetic sense using a capacitator.” She plans to continue her neuroscience studies in college, most likely with a focus on research.

Noor and the other student presenters at the conference are members of the Upper School’s BRAIN Club, which stands for Biological Research and Investigations in Neuroscience. Melanie says the club evolved out of a neurological research course she taught several years ago. Although that class is not currently offered, she encourages students in her freshman biology class to join the club, and many stick with it, often to follow up on independent research projects begun as class assignments. As part of the club, reports Noor, members “get hands-on experience as well as advice and feedback from peers on various experiments.”

Another presenter and club member, sophomore Patrick Newcombe has been studying the harmful effects of a common insecticide on zebrafish. The results of his research are “worrying for human development,” he explains, since “zebrafish share a large segment of their genes with humans” and the pesticide is “used in huge doses and dissipates throughout the environment.” He has also presented research he did on birds in Costa Rica and currently plans to study neuroscience and ornithology in college.

At the conference, Noor, Patrick, and the other students enjoyed the opportunity to talk with practicing neuroscientists, including those who, as Patrick says, “didn’t expect high schoolers to be doing the kind of research that we did.”

But the group also met a few researchers who are familiar with Melanie’s hands-on approach to science: her former students Badr AlBanna ’00, whose work involves the intersection of physics, information theory, and neuroscience; and Aram Parsegian ’00, who studies neurobiological factors contributing to mood disorders and drug addiction. Both alums took time away from their own poster presentations to talk with students and reminisce with Melanie about their first experiences with the scientific community they later joined.

There’s an excellent chance that scene will repeat itself one day soon.