Each year Sidwell Friends School hosts the John Fisher Zeidman ’79 Memorial Lecture, which brings to campus an extraordinarily distinguished group of experts on various dimensions of Chinese history, culture, and society. The Zeidman Lecture is an important event within the larger China-interest community in Washington, DC.

Please Note:  as part of the Zeidman lectures, Sidwell Friends School is highlighting the Asian American and Pacific Islander (AAPI) experience at this time in order to create greater cultural understanding and awareness of issues today. The previously scheduled lecture by Elizabeth C. Economy, Senior Fellow at Stanford University's Hoover Institution and Senior Fellow for China Studies at the Council on Foreign Relations, will be rescheduled for later in the year. We apologize for this late change, but please stay tuned for updates.

ERIKA LEE
One of the nation’s leading immigration and Asian American historians, Erika Lee teaches American history at the University of Minnesota, where she is a Regents Professor, a Distinguished McKnight University Professor, the Rudolph J. Vecoli Chair in Immigration History, and the Director of the Immigration History Research Center. The granddaughter of Chinese immigrants, Lee grew up in the San Francisco Bay Area, attended Tufts University, and received her Ph.D. from the University of California, Berkeley. She was recently elected into the American Academy of Arts & Sciences, testified before Congress during its historic hearings on discrimination and violence against Asian Americans in March, was awarded an Andrew Carnegie Fellowship and named Vice President of the Organization of American Historians.

Lee is the author of America for Americans: the History of Xenophobia in the United States and The Making of Asian America. She has participated in numerous panel discussions including Washington Post Live’s recent Race in America:  History Matters with Helen Zia and Erika Lee. She is featured in PBS’s five-part series, Asian Americans.

John Zeidman, a 1979 graduate of Sidwell Friends School, was studying at Beijing Normal University in fall 1981 when he contracted viral encephalitis. He was evacuated to theUnited States, where he died in January 1982.

After his death, John’s family and friends established the John Fisher Zeidman ’79 Chinese Studies Fund to perpetuate his belief that Chinese-American relations would thrive if students began to study Chinese language, history, and culture in secondary school. Endowed by this fund, the Chinese Studies Program was inaugurated at Sidwell Friends in 1983. Since its inception, the program has grown significantly and is woven into every division of the School.

ABOUT THE CHINESE STUDIES PROGRAM at Sidwell Friends school

The Chinese Studies Program at Sidwell Friends is funded in part by the John Fisher Zeidman ’79 Chinese Studies Endowment and the Dora Chao, MD, Endowed Fund. The program offers courses in Chinese language and history, grants for student and faculty study abroad, Zeidman Fellowship opportunities for Sidwell Friends alumni, an exchange student program, and the annual Memorial Lecture. Students are also aided by the Nancy Levy Zeidman Gift for Student Experiences, which invites a new generation of students to experience the wonder of China, and the Ida Fisher Zeidman Resource Center, located in the Richard W. Goldman Memorial Library, which houses more than 2,000 books and journals on China.

This design is a traditional Chinese seal representing John Zeidman’s name in Chinese characters. It has been adopted as the insignia of the Sidwell Friends School Chinese Studies Program. 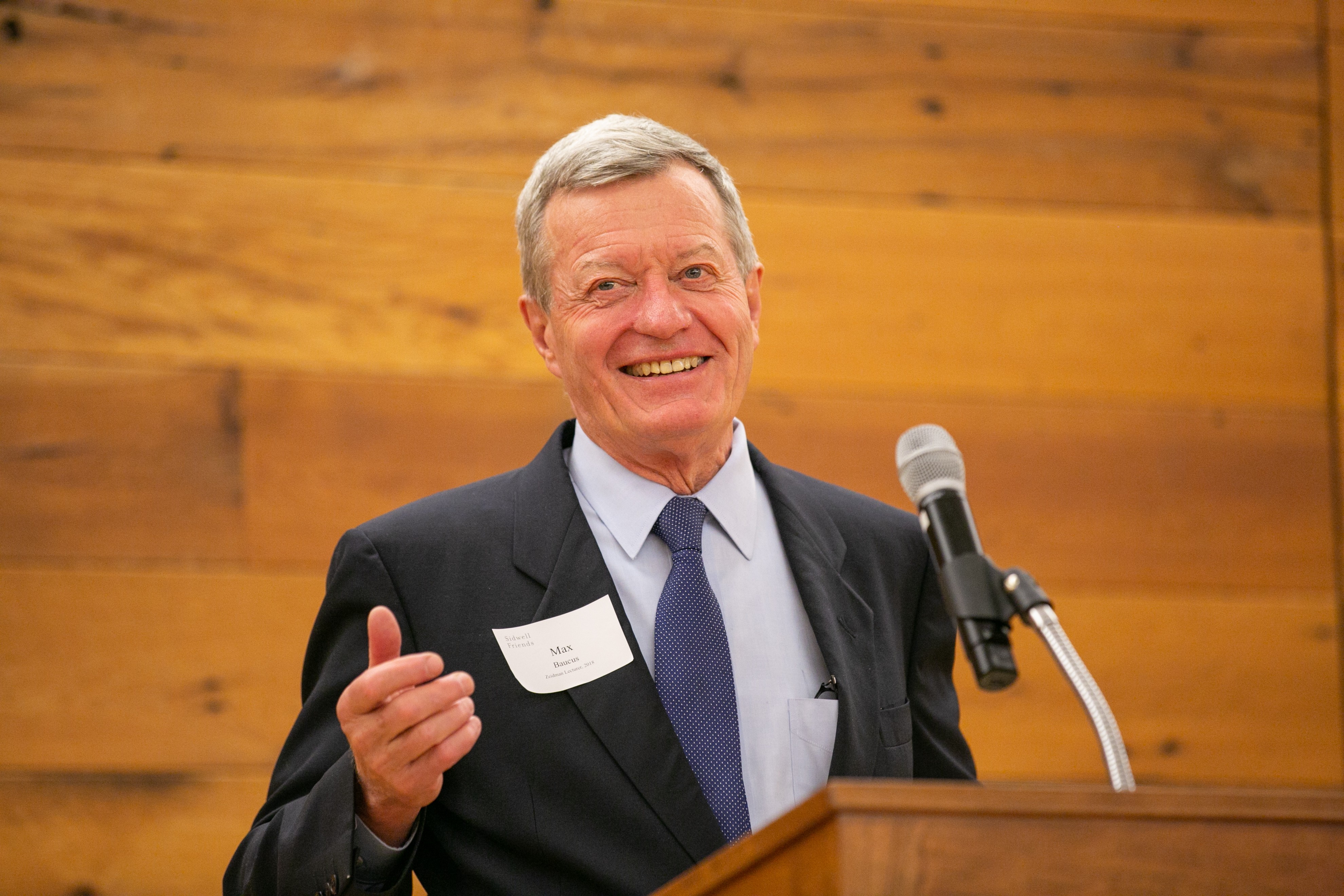 2015 Evan Osnos, Author of Age of Ambition: Chasing Fortune, Truth, and Faith in the New China

2014 Dr. Madeleine K. Albright, 64th Secretary of State of the United States, “The Most Important Relationship of the 21st Century”

2012 Prasenjit Duara, Professor of Humanities at the National University of Singapore, Director of Asian Research Institute and Research in Humanities and Social Sciences, “Chinese Civilization and the Problem of Sustainability”

2011 Jeffrey Wasserstrom, Professor of History, University of California, Irvine, editor of the Journal of Asian Studies, author of China in the 21st Century: What Everyone Needs to Know, “China’s Changing Place in the American Imagination: 1900–2010”

2010 James Fallows, National Correspondent, The Atlantic, and Author of Postcards from Tomorrow Square, “Reports from China”

2008 Rob Gifford, former Beijing Correspondent for National Public Radio and Author of China Road: A Journey into the Future of a Rising Power, “China at the Crossroads: Future Directions of a Rising Power”

2007 John Pomfret, Washington Post Los Angeles Bureau Chief and Author of Chinese Lessons: Five Classmates and the Story of the New China, “A Gambling Nation: Four Bets China Is Making on Its Future”

2004 Orville Schell, Dean of the Graduate School of Journalism, University of California, Berkeley, “The China Miracle: Long Boom or Bubble?”

2003 Yang Jiechi, Ambassador of the People’s Republic of China to the United States, “China-United States Relations in the New Century”

2001 James Lilley, Former Ambassador of the United States to Korea and the People’s Republic of China; Steven Mufson, Beijing Correspondent for the Washington Post; “The Tiananmen Papers: Contending Forces Then and Now”

1999 Li Zhaoxing, Ambassador of the People’s Republic of China to the United States, “An Exploration of U.S.-China Relations in the 21st Century”

1996 Nicholas Hope, Director of the World Bank's Operations in China and Mongolia, “China’s Economic Development in the Next Century”

1992 Nien Cheng, Author of Life and Death in Shanghai, “China under Mao Zedong and Deng Xiaoping”

1989 Harry Harding, Dean of the Elliot School of International Affairs, George Washington University, “The Challenge of a New Relationship: The United States and China in the 1990s”

1988 Han Xu, Ambassador of the People’s Republic of China to the United States, "Forging Bonds of Friendship between the Chinese and American Peoples”

1987 Arthur Miller, Playwright and Author of Pulitzer Prize-winning Death of a Salesman, “Salesman in Beijing: Directing an American Play on the Chinese Stage”

1984 John Hersey, Professor of English, Yale University, Author of Pulitzer Prize-winning A Bell for Adano and Hiroshima, "Readings from Treadup of the China Field”