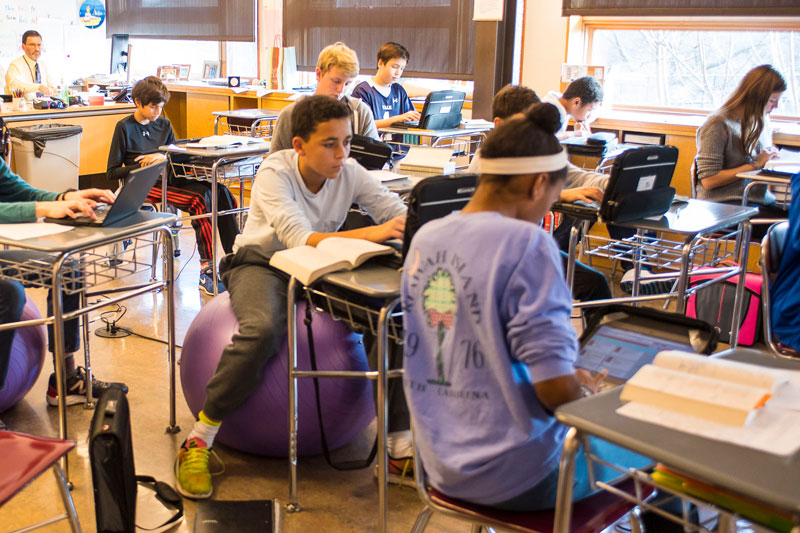 The 5th grade social studies program immerses students in various global cultures of the Middle Ages. With a focus on close reading, research, and critical thinking, students are encouraged to ask thoughtful questions, especially as they “learn how to learn.” As we travel the medieval globe, we make stops in the Byzantine Empire, the Islamic World, Western Europe, Japan, Mongolia, and Spain. In addition to learning about the cultures of the past, we also seek to connect them to our 21st century world.

The 6th grade social studies program centers on world geography (both physical and human), global issues, cultures, and current events. Map skills, the five themes of geography, and the connections between global issues are introduced at the beginning of the year. As students survey regions of the world, they delve into topics including the definition of culture, distribution and use of the world’s resources, population growth and distribution, the use of the land, the definitions of developed and developing nations, how people adapt to and change their environments, and the importance of sustainability in our modern world. Students develop research skills through personal short reports and then write longer papers and complete larger projects.

The social studies program for both 7th and 8th grade helps students build critical thinking skills, enhance analytical historical writing, and reinforce Quaker values. The emphasis on skill development prepares students for the rigors of the Upper School while they are learning about new content areas. The 7th grade curriculum tells the story of the United States by making connections between important events and turning points in our country’s history. Topics include the American Revolution, the Declaration of Independence, the Constitution and the Bill of Rights, slavery, westward expansion and “manifest destiny,” the causes of the Civil War, the Civil War and Reconstruction, industrialization, the Gilded Age, World War I, the Great Depression, World War II, the Cold War, the civil rights movement, and 20th century foreign policy.

Eighth graders begin a two-year study of world history. The 8th grade portion of the course examines the emergence of humans and the rise of civilizations in ancient Egypt, India, Greece, Rome, Africa, China, and the Islamic Empire. Students also learn about major religions of the world in their historical context. The second part of this course, covering the Renaissance and Reformation on through to the 20th century, follows in 9th grade.

All 7th and 8th grade students complete an independent research project and paper each year. This project, over and above the content areas noted, allows students to dive deeper into a topic of their choice while adhering to the rigors of historical research, writing, and citations. Instead of just reporting on a topic, 7th and 8th graders’ research papers require students to prove a thesis using the evidence they collect from primary and secondary sources. Finally, classes in both 7th and 8th grade also include many interdisciplinary opportunities with educators from other departments.