A Tribute to Anne Monahan
by Joan Reinthaler 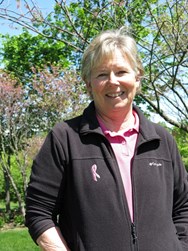 With Anne Monahan’s retirement from Sidwell Friends this spring, she takes 43 years of historical memory of Sidwell’s athletic program with her. Anne came to Sidwell in 1969 fresh out of American University to do her student teaching under the guidance of AD Evelyn Fine and coach Betsy Dondero. The next year she joined the athletic department (along with her long-time friend and colleague, Sherry Vetter Millard) as a full time teacher and coach and has been in the forefront of the evolution of the Sidwell girls’ program ever since.

When Anne arrived in the late 60’s and early 70’s, girls had few sports options. There was field hockey and tennis in the fall, basketball in the winter and softball in the spring. Girls’ sports often had to give way to the needs of the boys’ program. But Anne, an acclaimed hockey player, came to Sidwell with championship experience in other sports also. She had already won fame in lacrosse at her own prep school, Agnes Irwin, and at American University (she had learned lacrosse from her grandfather who was in the US Lacrosse Hall of Fame), and was a ranked squash player (8th in the country) while she was still in high school. And while she helped continue to develop the strong SFS hockey program, (taking the team to England in 1976 and tying every game there against strong competition) she also introduced lacrosse into the curriculum and by the mid 70’s, a budding girls’ lacrosse program was underway.

For a lacrosse program at Sidwell to flourish, however, Anne realized that the team needed local competition (at that time there were no area teams south of Baltimore) so, determined to implement the spread to other independent schools in the area of a sport she loved, she ran lacrosse clinics for their coaches, developed her own young talent by teaching lacrosse and hockey to 8-13 year olds in the McLean community youth programs, and gradually, local girls’ lacrosse took hold. The success of these efforts can be seen in the thriving activity of lacrosse programs throughout the region. In 1992, Anne was named the all-Met Lacrosse Coach of the Year with a three-year record of 42 wins and 3 losses.

With the same energy and imagination Anne had lavished on lacrosse, she established a squash program at Sidwell for both boys and girls with competition among a number of area independent schools.

Anne’s career at Sidwell as a Middle School and Upper School PE teacher and as a lacrosse, hockey and squash coach is legend but not many people know as much about her own athletic career. She played with the U.S. field hockey reserve team from 1966-1969, and traveled to Zambia with the U.S. Touring Team in 1970. She spent 13 years playing on local field hockey teams and on the Southeast Section lacrosse team and she’s been inducted into three Athletic Halls of Fame. In 1995 American University honored her as an outstanding field hockey player. In 2005 she was named to the Agnes Irwin Athletic Hall of Fame for her feats in hockey, basketball, lacrosse and squash and, in 2007 she was named to the Hall of Fame of the Potomac Chapter of the United States Lacrosse Association.

As for the near future—Anne plans to continue to coach in the area and to mentor other coaches. But, for the long run, she has just become a grandmother and young Liam looms large in her plans.