A Tribute to David Mog
by George Lang 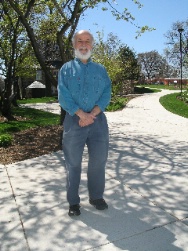 This past May, well after exams were over and kids were getting ready for the summer, I was walking past David Mog’s classroom and noticed two students dutifully working on something in the back of the room. I looked in to see what they were doing and found each building a small electric motor. This is one of David’s signature projects – having students get plans and parts and assemble a small motor at the end of the semester. And of course one final element—it must actually spin. This can be the frustrating part for many students but with David’s gentle assistance and encouragement, they all seem to eventually make it happen. This can result in a real sense of pride. For example, one of David’s students came back to visit after a few years in college and inquired whether he still had her motor. It was a rather unique design and he actually did still have it. She wanted to take it and show it to her electrical engineering professor at college.

Over the 19 years that David has been at Friends, his students have benefitted greatly from his excitement and enthusiasm for science and his encouragement of their efforts to become scientifically literate. He has taught physics at many different levels including Conceptual Physics, Physics I, and a special course for 9th graders called Introduction to Physics and Chemistry. David was the first one to teach this course and it has always been one of his favorites. The students needed a lot of support and encouragement which he loved to provide. David earned a PhD in chemistry from Caltech—an amazing intellectual achievement. It may seem surprising that he most enjoyed working with students who needed the most support but no. When asked what he liked most about teaching David responded, “What has always been fun is seeing the eyes light up when a student grasps a totally new idea. It is a deep privilege to be able to influence how a person sees the world. At some level, I have come to see the classroom as sacred space.”

David understood that high school was a time when all students could show tremendous growth and learn a lot about themselves. He was always especially happy when a student who may have struggled with science in high school returned and recounted success in college and/or in their career. At his retirement meeting for worship, one of his students sent the following message:

David mentioned three things that stood out as his first impressions at SFS. First, silent meeting. He states, “I was a total newcomer to the independent school world when I began at Sidwell. My wife and I had attended public schools and our children had done so as well. We chose to live in Arlington with its fine public school system when we moved here in 1981. I was also a newcomer to Quakerism although I was aware of the Quaker stand on war. I will never forget the powerful sense of “coming home” that accompanied my first exposure to Quaker Meeting at the start of the school year in the Meeting Room at Lower School.” Second was the quality and commitment of his fellow teachers and administrators. Third was the School’s commitment to economic diversity within the student body. When asked what he liked most about the school he said, “The strong sense of community that is never a given but needs to be rebuilt at the beginning of every academic year. An important component of the building process is the weekly Meeting. I enjoy the renewal that fresh faces bring and the challenge of maintaining core values.”

One of David’s major interests at SFS has been the growing environmental focus of the school, including the new middle school building. He learned a lot about the building and helped out with tours for visitors. He worked with the Middle School faculty to incorporate the “green” ideas into the curriculum at all levels. And of course, he actually rode a BIKE to school! -- from his home in far-away Arlington. I remember one day when David was late for school and it turned out that a car had hit his bike on Memorial Bridge as he came to school. The bike was destroyed but David arrived with a bandaged arm and carried on with his work. I thought after this experience he would probably start driving his car (license plate CO2MAKR) but I was wrong. He simply got another bike. What a level of commitment!

David’s plans for retirement include a lot of traveling. He and his wife Gloria are planning a July trip to China and Tibet that will take place before this article is released and also a month in New Zealand next February. Other plans are more fluid. “While several persons had suggested that retirement is easier if you have a plan in place and I had begun to explore possibilities, in early December I was on a church retreat when a tree that had lost every last leaf ‘spoke to me.’ The thought that I had was, ‘Let go of every part of your Sidwell/professional life; go quiet for a while; see what bubbles up; then decide.’” And of course David will still continue to ride his bike. Could this be the secret of the fountain of youth?

I think that Nancy Swift, who retired last year after many years in our admissions department, summed up David quite astutely -- “When I think of David Mog, the words ‘plain living’ and ‘high thinking’ immediately come to mind, phrases I found on the cover of a book entitled The Simple Life. David does not identify himself as a Quaker, but his lifestyle reflects the highest values espoused by Quakers; integrity in word and deed, regard for the value of all life, human and otherwise, and the limited resources we share, and using one’s individual talents to make a positive difference in the world.”

We all wish David and his wife Gloria a long and happy retirement and hope they come back and visit us often.