A Tribute to Ellen Pierson
by Ellis Turner 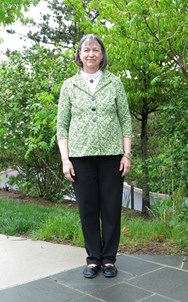 In late May 1999, then-Upper School Principal Bernie Noe rose to speak at the last Meeting for Worship of his Sidwell Friends career. About to depart to assume the headship of Lakeside School in Seattle, Bernie thanked the community and offered students a few parting words of advice. The message he delivered has remained with me over the years.

“Before closing,” Bernie said, “I want to single out one extraordinary colleague whom many of you may not actually know all that well. That person is Ms. Ellen Pierson, the Executive Assistant to the Upper School Principal. Ellen is not someone who calls attention to herself, who seeks thanks or praise. She prefers to work quietly and behind the scenes. So if you don’t know Ellen, you really should get to know her before you graduate. She is a truly an amazing person.”

Bernie nailed it. Since her arrival at SFS in 1969, Ellen Rue Pierson has supported a whopping twelve (12!) division heads, from Hall Katzenbach to Lee Palmer. But it is not Ellen’s extraordinary executive skills—the fast and accurate typing (she originally came to teach the subject), the amazing organizational talents, her nearly superhuman attention to detail—that have enamored her to the Clint Wilkinses and Lila Gordons of the world. Rather, it is Ellen’s calm, kind, and spiritual demeanor and her genuine heartfelt compassion that seem to have endeared her to her bosses.

A case-in-point involving former US principal, Bryan Garman, amply illustrates the zen of Ellen. Dr. Garman once described for me Ellen’s response as he retreated to his office in the aftermath of a particularly unpleasant meeting with a group of parents. “She walked quietly up to my desk,” Bryan related, “and handed me a smooth river rock. She simply smiled. No words were exchanged. At first I didn’t get it. I thought she might be joking. But I came to realize what Ellen was prescribing was precisely what I needed at that very moment in time.”

Ellen Rue was born in Nashville, Tennessee, spending other parts of her early childhood in Memphis. The family next migrated to Williamsville, New York while Ellen was in elementary school. But it was in Rye, NY that she came of age, attending middle and high school in suburban Westchester County. Ellen returned south for college, majoring in sociology and anthropology at what was then known as Randolph-Macon Woman’s College. It was in that genteel environment that she learned proper etiquette. “Our dates had to meet us in the parlor, under the watchful eye of the housemother,” Ellen reminisced. However, it was the late 1960s and the culture was changing. Ellen preferred to spend her college summers back East where she worked as a counselor at a temporary shelter for children on the edge of Greenwich Village. “I loved immersing myself,” she recalled, in that heady bohemian culture. In the evenings after work Ellen experienced the legendary Village music scene, hearing Bob Dylan, Joni Mitchell, Judy Collins and others in the crowded basement folk clubs on Bleecker and MacDougal streets.

After graduating from Randolph-Macon in 1969, Ellen was married, changing her last name to Pierson. Plans called for the newlyweds to move to Washington, DC and Ellen’s attention was immediately drawn to an opening for an assistant in a high school college counseling office who could also serve as a typing teacher. But what really caught Ellen’s eye in that position was the Quaker orientation of the school, Sidwell Friends. When Ellen was a junior in high school, her church youth group had made a trip down to Philly to participate in a Philadelphia Yearly Meeting workcamp. She was transformed by the experience; the workcamp organizer, David Ritchie, would become a lifelong friend and one of the seminal influences in Ellen’s life. Ellen would later play a role herself in the founding and establishment of Washington Quaker Workcamps.

Ellen’s career at Sidwell Friends has been an unusually influential one, especially as regards Friendly matters. Her service on faculty committees such as Clearness and Diversity has been long and distinguished. She served as clerk of the Quaker Life Committee and then clerked the search for a Director of Community Service. As a member of the Sidwell Friends Testimonies Committee, Ellen was involved in the creation of our much-beloved and heavily-utilized Testimonies booklet. No surprise Ellen was awarded the Goldberg Family Award for Service in 2000.

Student life at SFS has also been impacted by this extraordinary woman. Ellen’s term as advisor to the Black Student Union lasted an unprecedented twenty years and included organization of the first Go-Go in SFS history. As co-director of the KidPower Tutoring Program, Ellen supervised SFS student-tutors in their work with kids from Barnard and Tubman elementary schools. As a member of the Washington Quaker Workcamp Committee at William Penn House, she spent time on the Pine Ridge Indian Reservation.

Two of Ellen’s administrative roles deserve special notice. In the late 1990’s Ellen was appointed Director of Summer Studies and in that position she developed the first service and service learning courses at Sidwell Friends. For decades, Ellen played a key role in the administration of our Japanese Language and Culture Summer Study Program which sponsors an annual trip to Japan under the auspices of former SFS parent Mikio Kanda, president of the U.S.-Japan Culture Center. While serving as a chaperone in 1987 and again in 1996, Ellen cemented a friendship with atomic bomb survivor Michiko Yamaoka (who visited Sidwell Friends as Peace Speaker in 1995). The Japan trip itinerary includes a visit by our students to Hiroshima. In that city, Ellen has been honored by Japanese friends who placed her name, as well as that of former Head of School Earl Harrison, on a bench in their Peace Memorial Park (see photo at left).

It should come as no surprise that after four decades of teaching typing, supporting, administering, and serving others, Ellen is ready for a change. She shared a story of a friend whose parents retired and joined the circus. “I don’t plan to join the circus,” she told me. “My plan is to let my life unfold.” Classic Ellen. She then hoisted up a large scrapbook, at least 4 inches thick, for me to see. It was bulging with meticulously organized papers and plans for the years that lie ahead with her husband, Craig Palmer.

In April, 2012 Ellen was the featured speaker at an SFS alumni gathering in Boston. Her talk was entitled, appropriately enough, “Unwrapping the Gift of Silence.” Ellen Pierson has indeed given us—both teachers and students alike—that very gift. In her own quiet, selfless, and unassuming manner, she has let her life speak with a result that is tangibly visible and imminently palpable among the thousands of students and colleagues she has touched along the way.