A Tribute to Joan Reinthaler
by Samantha Sonju 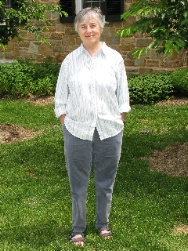 Each morning for the past 30 some years, Joan Reinthaler has been the first person to arrive in the Upper School Math Department. First thing, she unlocks the six classroom doors. This is just one small example of the generosity she shows to her students and to her colleagues.

Joan also unlocks the mystery of mathematics to her classes. She is both a math teacher and a teacher’s teacher. It goes without saying that Joan is a first rate mathematician who speaks and writes about math with a clarity that few people achieve. She can explain a complicated concept to any audience. She has a knack for never saying too much or too little, and for sticking to the point. This is a real art, not realized by many teachers. She is not one to ramble on about a topic, but says just enough to get her students thinking and actively learning. Like most subjects, mathematics is learned by doing, not watching. Joan’s students become able to do really good mathematics.

Joan maintains a presence in the classroom that encourages students to work. One student told me that in Ms. Reinthaler’s class he had only once come to class without his homework (not true in his other classes). When I asked why, he replied, “Well, no one ever enters Reinthaler’s class without homework; it just isn’t done.” Another student told me, “I never liked or had any interest in math until 12th grade when Ms. Reinthaler taught me Advanced Math. Now here I am majoring in it!” She is now a math teacher in California.

The classroom is not the only place Joan teaches. Almost every morning a student shows up at the math office door between 7 and 7:30. Joan is always expecting them, graciously offering her time to help with a problem or a difficult concept, at the time when most of us are rushing to get ready for class. She is the person to whom department members go for advice on teaching, math problems, and other issues involving Sidwell Friends.

As department head, Joan has mentored countless teachers throughout the years. These teachers in turn have gone on to teach at other schools, become department heads, and finish PhD’s in math. Eric Steadman, Dan Rubenstein, Matt Zimmer, Nathan Ryan, and Anne Kaufman all attest to Joan’s major influence on their careers.

Joan’s work in mathematics teaching is known throughout the country. She has won numerous awards for teaching, among them the President’s Award for Excellence, the Tandy Technology Award, and the Edith Sliffe Award. Any time one of us goes to a math conference people ask us about Joan and tell us how fortunate we are to have her at Sidwell Friends.
​​​​