A Tribute to Karen Page
by Teresita Cuesta 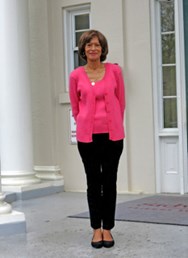 It’s August. It’s time to start setting up the classroom. This year, however, there were no phone calls to decide when to start easing back, or to check who had bought what supplies, or to share the latest idea for an activity. Most poignantly, there was no hanging of the peace banner. The first thing Karen and I did every year in our 2nd grade classroom was to put the banner up, and the last thing we always did was to take it down. As teaching partners for eleven years, this was our ritual and a tangible affirmation of our belief.

When I met Karen Page in 2001, just a few months after moving from Guatemala, she had already been at Sidwell Friends for over a decade. She would forever tease me about the formal black dress, nylons, and heels I wore to the interview. Along with a different dress code, Karen introduced me not only to the idiosyncrasy of the Lower School and the SFS community, but to the culture of private education in general and of the Beltway area in particular. She opened my eyes to the complex issues of race and class and the peculiar ways they manifested themselves. Speaking as a “born and raised Washingtonian,” Karen told me stories from being the first student of color at Burgundy Farms, to passing Sidwell Friends on her way to Immaculata as a high school student, to being the first teacher of color at Beauvoir, to finally capitulating to Rich Lodish and joining the SFS faculty.

For over twenty years Karen’s laughter resonated in the Lower School hallways. As a teacher, she was known for her sense of humor, her meticulous attention to detail, her thoughtful crafting of curriculum, her warm embrace of each child, and her high standards. Students in Karen’s class knew not only that they were expected to do their best, but that they would have Mrs. Page at their side to help them achieve success. With song and dance, giggles and jokes, conversation and banter, students worked hard and loved every minute of it. Their reward was an incredible sense of accomplishment. Karen’s reward and joy were seeing her students grow.

Yet, academics were just a slice of what children learned in Karen’s classroom. They also learned about being kind to everyone, working for peace in everyday moments, and having the courage to take a stand. They developed a commitment to social justice, an appreciation of beauty and simplicity, and a sense of the value of community. They became more responsible, independent, and resilient, more aware of their own talents and needs, and more willing to step out of their comfort zones. Karen could go from offering wise words to address a serious issue during our council meetings to dancing with the students to the latest party music!

Beyond teaching, Karen had a crucial role in starting and sustaining many initiatives at Sidwell Friends. One important program she started was the Lower School partnership with Brightwood Elementary School.

Karen was not afraid of disagreements because she believed in the power of having deep discussions, with honesty and respect. Out of these conversations, along with her vision for and love of the school, the Diversity Advisory Group was created.

Many afternoons, long after school had been dismissed, we would be hard at work into the early evening hours. Upon realizing how late it was we would ask each other, “Why are we doing this?” No answer was needed. We knew why, and anyone who has met Karen would know too.