A Tribute to Nancy Swift
by Shelly Jeffery 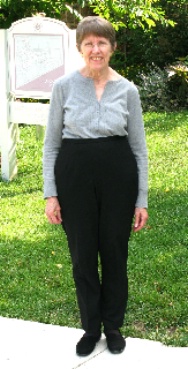 Sitting with Nancy Swift in her cozy office in Zartman House, I was struck by the quiet dignity and generous spirit with which she shared her life experiences with me. She always listened carefully to my question, gave it thoughtful consideration, and then responded, often with fond remembrance and enthusiasm. It is the same way that she has interacted with so many applicant families in interviews during her 19 years as a Middle School and Upper School admissions officer here at Sidwell Friends School, giving them her undivided attention and making them feel both comfortable and valued.

Nancy was born in West Chester, Pennsylvania but grew up in Philadelphia. Her mother, who was a birthright Quaker, introduced Nancy and her brother to Quakerism at a very early age. Nancy loved going to Meeting and sitting in the Quaker Meeting House quietly thinking her own thoughts. She started attending Germantown Friends School when she was in kindergarten and was a lifer there.

One of the main reasons Nancy decided to go to Bennington College in Vermont was because of the dance program there. Nancy’s love of dancing had begun with her mother who also enjoyed dance very much. Nancy was encouraged to continue her interest at Germantown Friends. After attending Bennington for a while, she realized that her dream of becoming a professional dancer was not going to come true, so she changed her major to history and government. However, her love of dance did not diminish. One of her favorite activities while she was working at Sidwell Friends was to attend the annual dance ensembles given by the students. One of her greatest thrills was being able to perform herself in the spring concert of the dance ensemble in 2008 which celebrated the 125th anniversary of Sidwell Friends.

As a Bennington student, Nancy spent three non-resident terms in Washington D.C., working for Quaker and other non-profit organizations. She returned to Washington after graduation to attend graduate school at George Washington University and worked for the National Park Association before her marriage to her husband Ted. Because of Ted’s work as a newspaper reporter and public information officer, the family moved around quite a bit. When Ted went into the army, they lived in Germany, finally coming back to the United States and settling in the Bethesda area before and after spending four years in Miami, Florida. In 1985 they moved into their current home in North Potomac.

Nancy truly enjoyed all aspects of her 21 years at Sidwell Friends. She particularly loved meeting with applicant families and getting to know them as fully as possible, and since no one gave a more thorough tour or interview than Nancy, she accomplished that well. Once students had enrolled, she kept a close eye on how they were doing, and she reveled in their accomplishments. She attended Upper School graduation every year, and as particular students would come forward to receive their diplomas, she would say with great pride and affection, “I interviewed him (or her) when they applied.” She would then describe all the special qualities of that student.

Nancy admitted that her two greatest challenges were adapting to all of the new technology and keeping abreast of all of the changes that were going on at the school. She always wanted to be able to answer any questions that students and parents asked about daily life in the school, curriculum, extracurricular activities, and special programs, so keeping up with all that was going on was very important.

One of Nancy’s most important roles at Sidwell Friends was educating both applicant families and staff about Quakerism. She felt very strongly that it was the Quaker aspect of Sidwell Friends that set it apart from many of the other independent schools in the area, and she worked very hard to help families, faculty and staff understand various aspects of Quakerism. As a Quaker herself, she felt it was very important in her interviews to convey that non-coercion and the prizing of diversity were two very important Quaker values that are practiced at Sidwell Friends, and that being at a Quaker school meant that one’s individual beliefs were to be respected and celebrated. Several of the monthly Zartman House Meeting for Business gatherings were organized by Nancy, and she arranged for various people in both the school and Quaker community to come in and speak to the staff about a variety of Quaker related topics. At the end there was always a brief Quaker Meeting. She became the Quaker expert, and was always available to answer a question, give thoughtful advice or have a discussion about any topic regarding Quakerism. When I asked Nancy what she would most like people to remember about her time at Sidwell Friends, she said she hoped that people would recognize her desire to exemplify the very best of Quaker values.

Nancy purposely has not made any specific plans for the future. She sees it as an open book, and would like to take time to decide in what direction she will go. She did say that eventually she was sure that she would find a new way to let her life speak. Nancy visited her two daughters, sons-in-law and four grandchildren in San Diego this summer, and she very much looks forward to having the opportunity to spend more time with them now that she is not working. She will continue with her many interests which include reading (especially American history and contemporary novels), going to art museums (she sometimes thinks she should have majored in art history), keeping physically fit by exercising daily, practicing modified Tai Chi, listening to classical music, and, of course, dancing.

Nancy will be greatly missed by the Sidwell Friends community. She came in contact with and formed special relationships with everyone here – students, faculty, parents, B&G and kitchen staff, security and the cleaning crew. She was always one of the first to arrive in the morning and helped get the coffee started for those in Zartman. She turned on lights and opened up office doors for her admissions colleagues. If any of us in admissions were delayed, ill or had some change in plans in the morning, we knew Nancy was there to call and would get the word out to everyone. She was an expert at getting jammed paper out of the printer. She was the Candy Queen, and her overflowing bowls of a wide assortment of individually wrapped candies were always available to treat us all, both visitors and school community members. Most of all, we will miss the daily presence of the warm, considerate, even-tempered, engaging and uniquely wonderful individual that she was.