A Tribute to Nina Koltnow
by Richard Honn 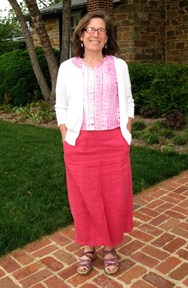 A TRIBUTE TO NINA KOLTNOW

I often dropped into Nina's math classes during a free period and became entranced with her patient and energetic teaching of math. She used several approaches to make her subject interesting and attainable, and always laid the practical on a bed of general knowledge. "How does this all go together?" seemed to be a theme in her classroom. She has an insatiable thirst for knowledge in almost every area. As part of the fabric of her life as a teacher and a friend, Nina shares her enthusiasm and expertise: her glass jewelry company, her garden, her love of movies and especially her love of friends and family. When I traveled with her to visit The Bootham School in York, England, the Minimester trip was full of discoveries and the shared joy of exploring culture, history, and fellow Friends institutions. I have always felt supported as a teacher and a friend by Nina. She brought excitement and directed energy to activities like rock climbing, faculty meetings, and service projects, like the ones we did together with students from the Hearst School.

Sally Selby said the following in her closing remarks to the Faculty:

"Nina Koltnow began her Sidwell Friends teaching career in the fall of 1992. In addition to teaching 7th and 8th grade and serving as an advisor, she also stepped in as needed in the 6th grade. After two years she became the Middle School Math Department Chair, a position which she held until the summer of 2002, when she took on the role of Middle School Assistant Principal.

"Nina served as the constant in the Middle School office during the transition between three principals in three years: Andy Berry, Steve Barker, and me. During that time she also played a critical role in the planning for the new Middle School building, and she oversaw many details, from the size of classrooms, to furniture choices, to the planning of the playground, through her work with a student group during Minimester.

"Nina's leadership positions in the school have been numerous. She has led the summer Japan trip, forming a long friendship with Yamaoka-san, our friend in Hiroshima and building on her experience in that country in an earlier time in her life. She also served as the Clerk of the Science Committee for the Self-Study, representative to the Board Finance Committee, and most recently, as the Faculty Representative to the Board of Trustees for the 2009-10 and 2010-11 school years. That position also brings the responsibility of serving as the Clerk of the Faculty-Staff Council, a position that she again held through transitional times, during Steve Barker's interim year and Tom Farquhar's first year back. In addition, she is a recognized leader outside of the Sidwell Friends community, having served on several evaluation teams and having participated in an Earthwatch project. Nina maintained a commitment to in-service work in Math with the DC Public School System (as well as for middle school math teachers.)

"Nina is the recipient of several faculty awards, including The Goldberg Family Award for Teaching Excellence, the Frank Barger Chair for Distinguished Teaching (she was the inaugural recipient) and the Richard W. Goldman Sabbatical Award. She was also a recipient of the Presidential Award for Excellence in Math Teaching in 1997.

"Nina's gifts as a teacher are many. She has been a champion of our strongest students and a supporter of those who have needed extra support, looking for projects that will help them make math real. I encourage parents to send me copies of letters that they send to teachers at the end of each year, and these are some that are in my file: 'I just wanted you to know how much you have done to develop and ignite our daughter's love of math. She has many times mentioned to us how much she loves the way you teach and how wonderfully challenging your class was for her.' From another parent, 'my son said that people like Nina have made me who I am today.'

"We in the Middle School know her as a wickedly funny 'Queen Neen the Green,' a role in the 5th grade knighting ceremony that she reprised this year in the absence of Queen Jennifer. We remember the fabulous silver shoes that come out for Halloween or Pi Day. She is the craftsperson for jewelry that many of us wear every day—a skill that she has now taught to two Minimesters' worth of Middle School students. She willingly hosts visitors, from teachers to Russian exchange students to assembly performers. She speaks with clarity and conviction, and I have appreciated her wise counsel and honest feedback. She is that rare person who can be direct without being harsh, and she is a loyal friend and colleague.

"Nina's 20 years here at the school have been incredibly challenging ones for her personally. We have done our best to hold her through the death of her husband, Carl, and through her own cancer, and we have watched joyfully with her as her three sons have grown up with us and graduated from Sidwell Friends. In her letter to the Middle School faculty announcing her retirement, she wrote, 'Simply put, it is time for me to switch gears. It's just time for me to have a little more control of my time. I hope to wake up well after 5:30 am, spend Septembers in the desert, and see more of my grandchildren. You have inspired me through your tireless dedication, intelligence, creativity, and heart. I can't possibly thank you enough for the ways in which teaching here in the Middle School has enriched my life.'

"Back at you, Nina.You have inspired us through your tireless dedication, intelligence, creativity, and heart. We can't possibly thank you enough for the ways in which you have enriched our lives. We will miss you!"