A Tribute to Percy Martin
by Ed Crow 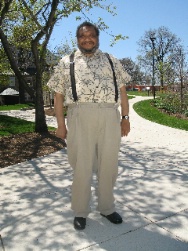 For thirty years Percy Martin’s art studio has been one of the happiest places on the campus. There generations of students have discovered the joy that comes from looking at the world in new ways and interpreting their observations through art. It has been a place where to dream is not to be out of touch, but to offer the possibility of being carried away by the imagination. It has also been a place of refuge and support, where fears and anxieties can vanish and inner peace, if not always quiet, can be found. None of this has anything to do with the homely space itself; it has everything to do with what painter Robert Henri called the “art spirit,” a sprit that Percy brings with him wherever he is. It is a spirit that is contagious among his students and among his colleagues. It is a powerful spirit that can change lives.

That spirit infuses Percy's own work as a professional artist, much of which is inspired by his personal myth "The Bushmen." For over twenty-five years, he has been producing a series of intricate and magical prints detailing the culture and rituals of his mythological people. Each piece tells a part of the ongoing story and might include the men and women of the tribe, the priests and priestesses, the protective spiritual presence of St. Mar, and the rites of passage symbols of birds and elephants. In recent years, Percy has ventured beyond traditional etching into digital printing to achieve a depth of color and detail not possible through traditional means. He has introduced that dimension into his classroom as well, with great success.

Percy has shown his work widely in the United States, Africa, Latin America, Ukraine, and Russia. His works have been included in traveling exhibitions of the Smithsonian. Local venues have included the Corcoran Gallery of Art, Parish Gallery, McLean Project for the Arts, and the Ratner Museum. He is represented in numerous private collections. In October, 2008, he was "The Daryl Reich Rubenstein Memorial Guest Artist" at Sidwell Friends School.

As a teacher Percy is inspirational, not dogmatic. He opens minds by his own example and by encouraging his students to look farther than they think they can see. His studio is usually crowded with students from several different art courses working on a wide range of projects, with Percy moving among them offering patient direction that aims to stimulate each student to pay attention to his or her own Muse. Students often wander in during free periods to work on projects, listen to one of Percy’s albums, or seek advice. When he has a chance to sit down, Percy stays busy helping anyone who asks or working on some project of his own, such as one of the extraordinary “Percy Cards” we have all come to cherish and which seem to flow effortlessly from his pen. One can become fairly hypnotized with awe while watching Percy’s hands move over a piece of paper.

As a colleague and friend Percy has taught all of us the meaning of generosity. He has shared not only his time and his art, but also his intelligence, experience and wisdom in countless ways that have made the school a better place. As with his students, he has opened our minds and expanded our vision. Often his counsel has saved us from ourselves by stimulating us to frame a new set of questions or to look at an old question from a different perspective.
On a personal note, I feel blessed to have had the opportunity to spend a great deal of time in Percy’s studio over the years. I have taught drawing there; worked on set designs there; used the light box and color printer; borrowed paint, brushes, hot glue, and mat board; and listened to Ella Fitzgerald, Billie Holiday and Duke Ellington. As so many others have done, I have taken up enormous amounts of Percy’s time asking for help with one thing or another and have always received much more than I asked for. I don’t know if he was ever conscious of it, but Percy has taught me something of value every time I have set foot in his room.

Although Percy has retired and we will certainly miss him, we can look forward to the visionary work that will come from his studio at home as he continues to expand the universe of “The Bushmen.” Many years ago Percy promised himself that the one thing he would never do is teach; fortunately for all of us he has been teaching ever since. It is perhaps here at Sidwell Friends that Percy has created his most important legacy – the love, high esteem, and gratitude of his students and colleagues, past and present, who have been inspired by his genius, his generosity, and his compassionate nurturing of the imagination.