A Tribute to Tom Farquhar
by Sally Selby 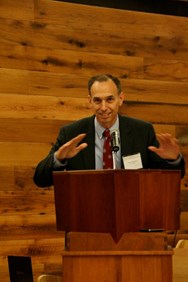 Tom Farquhar started his first SFS career as a Middle School science teacher and coach of the cross-country team. Tom spent two years as a MS teacher and then moved to the Upper School to teach physics, where Dean of Students was quickly added to his job description. He then left SFS to become the Head of School at Westtown, a Friends school in West Chester, Pennsylvania, outside of Philadelphia. He spent 13 years as head of Westtown and then returned to the DC area to serve for eight years as Head of School at Bullis.

When I first came to Sidwell Friends School as a Middle School teacher in 1982, Tom Farquhar was a physics teacher and dean in the Upper School. I knew of him, but I certainly did not know him well. In fact, my first real awareness of Tom came some years later when I attended a gathering at Pendle Hill, the Friends retreat center in Pennsylvania, to consider, along with other educators at Friends schools, the Testimony of Simplicity. Tom, then Head of School at Westtown, came to that conference as one of our evening speakers, and his conversation with us demonstrated the characteristics that I still know in him today: intelligence, analytic thought, deep wisdom, and an understanding of Quakerism that comes of his lifelong experience in the Religious Society of Friends. His talk with that little group at Pendle Hill made quite an impression on me, as a young teacher trying to get a grasp on Quakerism.

Tom returned to Sidwell Friends as Head of School four years ago. One can list his accomplishments: oversight of the Lower School leadership transition, implementation of the Board’s vision for the Long Range Priorities (which had been formed by the Board before his arrival), creation of an equitable and transparent salary scale for the SFS faculty, and outreach to families from the Latino community in the city leading to an increase in the numbers of those families here at the school.

In addition to these specific accomplishments, he has been a strong supporter of the athletics program, including working through football dilemmas and hosting the cross-country team for their fall practice. He has prepared carefully for and spoken effectively at meetings with donors. He has engaged in national conversations about education, working here in DC on the issue of public/private partnerships, a cause near and dear to my heart, and internationally as a member of the SYA board.

For those of us on the Administrative Council, our regular meetings with Tom were consistently a wide-ranging discussion of his recent reading, of conversation with someone that he had met, and of the many things he was pondering on a given day.

New faculty members at the School over the last two years, along with the members of the Middle School faculty at our beginning meeting last year, have been the recipients of his far-ranging understanding of the practices of the Religious Society of Friends and the history of the Sandy Spring Friends meeting – followed for new faculty by Tom’s enthusiastic participation in the ropes course at the Sandy Spring Adventure Park.

Because of the directions that my own life has taken, I have had occasion to think about the challenges of being a leader, especially in today’s culture. We need leaders, but we are awfully tough on them. It is often a thankless job, and it is definitely a lonely one. A leader is never able to satisfy all constituents and one’s fallibilities – we all have them – are very visible for the world to see. When our own “growth edges” -- as Middle School Counselor Michelle Parker calls them – get the better of us, we carry this weight in front of our colleagues and within ourselves.

Tom Farquhar is wise enough to know that that his goal is to make Sidwell Friends the best school it can be first and foremost for the students who spend their years here, taking the long view of how the School can best grow. That has been his steadfast guiding principle during his headship.

Tom’s life is a full one outside of his association with Sidwell Friends. He is a farmer, a marathon runner, a woodworker, an opera singer, and an environmentalist. He also has a rich life within the Meeting at Sandy Spring which nourishes him. He heads now to a completely new adventure. He will be living in a very different culture, running a very different kind of school. William Arthur Ward once said that “Greatness is not found in possessions, power, position, or prestige. It is discovered in goodness, humility, service, and character.” Tom will bring those gifts to the GEMS schools in Abu Dhabi and Dubai.

Tom, from my heart I wish you Godspeed, and I thank you for your leadership here and all that I have learned from it.