A Tribute to Neal Tonken
by Mamadou Guèye 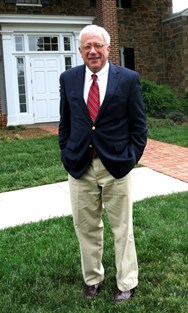 In the fall of 1984, Neal Tonken joined Sidwell Friends Upper School faculty to teach English. This was quite a departure for an attorney from the United States Department of Justice who fought passionately and successfully for school desegregation. Just as he helped to change the landscape of the social fabric of the United States education system, Neal brought that same passion and dedication to teaching his students the value of courageous thinking, academic excellence, and accuracy in written expression.

Life at Sidwell changed, not only for the students of English, but also for the entire Sidwell Friends community. Neal Tonken became a legendary teacher, colleague, and administrator. Twenty-nine years after his début, he is still one of the most memorable and revered academicians to play a role on the Sidwell Friends stage. It is fitting to mark this tribute with words from former Head of School, Bruce Stewart: “Clearly, Neal, you have a gift in the classroom that is well beyond the reach of most of us. Your capacity for opening minds, motivating students and provoking true excellence -- as well as a life-long passion for learning -- is as powerful as any I have encountered in my nearly fifty years as an educator.” Yes, Bruce, I whole-heartedly agree and suggest that twenty-nine years of Sidwell Friends’ students would concur! This is a tribute to a perpetual pedagogue. Neal believed in “learning” as much as “teaching,” that the value of the one was defined by the breadth of the other.

I first met Neal while walking down the corridor from the Department of Modern and Classical Languages office to the English Department. Our conversation went from English literature to Francophone literature, from Orson Welles to oral tradition, and so on. I immediately recognized an academic powerhouse whose scope of knowledge was his instrument of teaching. I was struck by his devotion to teaching. He was not only concerned about the material he taught, but equally devoted to the ability of his students to consume, analyze, and embrace all that was put before them. As a testament to his belief in the “teaching is learning” continuum, Neal attended my French class for an entire semester -- alongside many of his students -- and his participation included assignments, homework, and tests. I am pleased to add that he passed!

His service has included college counseling, coaching, numerous committee assignments, creation of the Loss of Privileges (LOP) disciplinary system, writing the mid-nineties’ school philosophy, and a host of other contributions to life at Sidwell Friends. Neal has been recognized with coveted awards such as a Sidwell Friends Yearbook dedication, the England Award for Teaching Excellence and the Goldberg Family Award for Teaching Excellence.

If ever it were possible for a high school teacher to be a “students’ teacher” and a “teachers’ teacher” Neal was a perfect example. From a student perspective, “his lessons were notorious. From public recitation of the first 12 lines of the Canterbury Tales, to the Macbeth mid-final that felt like the Day of Reckoning, a Tonken grade engendered either typical teenage anguish or near-euphoric high.” Neal was often and fondly referred to as the “conscience” of the institution and as one faculty remarked, “If it were on our minds as faculty, it came out of Neal’s mouth.” He took the helm of a litany of exchanges between every component of our Sidwell Friends community; while sometimes controversial, he was always colorful, enlightening and thought provoking. He believed in his colleagues and the mission of teaching at an institution for which a reputation for student’s learning -- sterling as it is -- comes second to truth, honesty, and accuracy in teaching. It is not surprising that as a former Department of Justice attorney, Neal Tonken was a symbol of balance, justice, and fairness. Those characteristics were evident in every action, discussion, and stand on issues at Sidwell Friends.

Retirement for Neal is not a process of disengagement, but more a function of shifting his incredible life resources into writing and spending time with his adoring wife, Jancy Tonken. I see many novels on the horizon! He has lived a life just like a novel, unfolding before our very eyes. The inside jacket cover would read: “A story of integrity, authenticity, honesty, and courage. The story of a heart and mind who saw teaching and learning -- while not interchangeable, definitely an interdependent continuum.” It is my pleasure to write a tribute to Neal Tonken; it was easy to construct, albeit difficult to limit to one page! I could indeed go on for quite a while about my former colleague and forever friend. And, while paying tribute to Neal for his unique stamp on Sidwell Friends, I thank him for countless memories and mentor moments in my world.