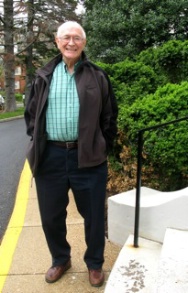 Soft-spoken and mannerly. Erudite and articulate. Beloved by generations of students and respected by teachers of all disciplines. Man, I wish those words were being written about me! Instead, those phrases apply to the legendary Robert Thomason, a friend and mentor who helped shape the course of my career at Sidwell Friends. For multiple generations of students, Bob served as a model of academic excellence, personal integrity and intellectual rigor. For innumerable colleagues, he personified the measured decision-making and bleary-eyed wisdom (apologies to Yeats) born of many years of experience in independent education.

Our paths crossed for the first time in the early fall of 1980 as tragedy struck the Upper School. Longtime Director of College Services Lloyd Kayhart died suddenly of a stroke. Clint Wilkins, who had just assumed the role of principal, acted quickly, deliberately and, as it turned out, brilliantly. To stay the fears of parents and the tears of students, Clint announced that English teacher Bob Thomason, former headmaster of two well-respected private schools (and the former director of college counseling at one of them) would be taking charge of our college office. Overnight, peace and calm overspread Northwest Washington.

I was then a 27-year-old interim part-time history teacher, fresh out of grad school, in my first few months at Sidwell Friends. And, of course, I was totally oblivious to the fact that I would soon be impacted by this sad event and the emergency administrative Band-Aid it required. With my one-semester contract due to expire at the end of the fall (Lee MacVaugh, whom I was replacing, was about to return from sabbatical) and no job in sight, I was suddenly summoned to the principal’s office.

I listened attentively as Wilkins laid out a plan that would keep me at SFS for the remainder of the 1980-81 school year. He explained that Bob Thomason was going to need some assistance teaching his English classes. Writing letters of recommendation for the 100+ members of the senior class, calming nervous parents and maintaining contact with deans of admissions from all over the country was going to make it difficult for Bob to keep his mind on Wordsworth and Coleridge. Would I be willing to take a few of those classes (my BA is in English) and assist him in the College Services office? Not surprisingly, my answer was an instantaneous and enthusiastic, “Yes!” In addition to securing employment, I had just been handed a rare opportunity to work closely with a very seasoned administrator and an extraordinary master teacher.

Assisting Bob that spring turned out to be one of the seminal events in my 30+ years at Sidwell Friends. While I could not have fully comprehended it at the time, I was about to receive the greatest introduction to independent school life, learning and leadership any young educator could wish for. Move over Klingenstein. I was being enrolled in a practicum supervised by Bob Thomason!

With his khaki pants, blucher moccasins, and horn-rimmed glasses, Bob cut an especially intriguing figure for a public high school kid from Texas. As a complement to the preppy attire, Bob could always be seen walking briskly down the halls with a folded newspaper or magazine under his arm. He devoured The New York Times daily, scanning each of its pages for information that was pertinent to trends in education and adding his famous analytical marginalia off to the side. Bob did the same with The Chronicle of Higher Education, The New York Review of Books, and The Atlantic Monthly, just to name a few of the journals that were always strewn around his office. Ever the teacher, Bob invariably ended up tacking his annotated clippings to the faculty room bulletin board or else slipping them into my mailbox for more targeted edification. Here was a man whose finger was firmly positioned on the pulse of academia in America.

Of course, Bob went on to permanently assume the reigns of the College Services office* and would also serve for a time as director of our summer school. But he always continued teaching English, offering such diverse courses as Fascism, Communism and the American Writer, Latin American Literature in Translation and perhaps most famously, Sophomore English, a survey of British lit. But what of Bob’s early career and the experience in schools that led Clint to so quickly seek his help?

Robert Thomason’s life before Sidwell Friends was a remarkably full and interesting one. He had grown up in Asbury Park, New Jersey (better known as the home of Bruce Springsteen—sorry, Bob), graduating from the town’s high school in 1944. Bob won a track scholarship to the University of Michigan, became the youngest varsity letter winner in the school’s history and served as captain of the track team. Following his sophomore year, Bob joined the Army and spent 18 months in Korea, working as a cryptologist in the office of Commanding General John R. Hodge. (“I spent a great amount of time decoding communications from George Marshall, Truman’s Secretary of State,” he told me). Bob returned to Michigan and graduated in 1949 with a degree in English. However, it could be argued that the truly seminal events during his Ann Arbor years had nothing to do with academics. While an undergraduate, Bob married his sweetheart, Marge Story, and their first child Jim was born during the couple’s residence at UM.

After graduating from Michigan, Bob was accepted at Columbia University Teachers College where he pursued an M.A. in education. He had wanted to go on for his Ph.D. but not enough money remained through the GI Bill to make that possible. While at Columbia, Bob did his student teaching at Horace Mann, where his gifts as an educator were quickly recognized. He was soon offered a permanent position as an English teacher and track coach at the school. Bob received his master’s from Teachers in 1950, and after only three years in the classroom at Horace Mann, was simultaneously appointed director of college counseling and middle school principal. The Horace Mann years also saw the Thomason family grow. Three more children-- Dianne, Peter and Anne-- were soon born to Marge and Bob.

Others in the independent school world had started to hear of Bob’s talents and his successes at Horace Mann. In 1956, at age 28, he was appointed head of the Park School in Baltimore. While at Park, he oversaw the school’s movement from an inner city campus to the suburbs of Baltimore County. After 11 years as headmaster (and the birth of a 5th child, John), Bob returned to New York City in the fall of 1967 to head Horace Mann. The 1960s were tough times for independent school administrators, not just college presidents. Bob had been hired by the Horace Mann board to oversee the school’s transition to a coed student body and assist in relaxing what was perceived by some as a conservative culture. Bob modernized the dress code and was preparing for further reforms when he found himself in conflict with trustees who did not approve of the mandate he had been given by the liberal wing of the board.

After only two years at Horace Mann, Bob left New York in the autumn of 1969 to pursue a new career on Martha’s Vineyard. Bob and Marge had purchased an old mansion which they converted into the Lambert’s Cove Inn. Marge was the cook and Bob the general manager. The Thomasons owned and operated Lambert’s Cove until an opportunity arose that would lead them back to the Mid-Atlantic-- a teaching position at Sidwell Friends. It is, however, a little known fact that Bob’s SFS career did not actually begin in Upper School. In the fall of 1977, when he first set foot on our Wisconsin Avenue campus, it was as a teacher of 7th/8th grade English and history. Bob remained in Middle School for two years before joining the Upper School faculty for the 1979-80 academic year. And with them he remained—as literature instructor and administrator—until his retirement in 1994.

Bob’s post-SFS life has been marked by both joy and sadness. Marge passed away in 2003. Their son, John, with whom Bob worked in the masonry business, died three years later. Since 2008, Bob has taught adult education courses at Johns Hopkins’ Osher Lifelong Learning Institute. His offerings include Bellow, Malamud and Roth and Tolstoy’s Short Stories. He has also taught entire courses centered upon single literary masterworks: War and Peace, The Brothers Karamazov and Ulysses. By the way, Bob was introduced to the Hopkins program by a woman named Floss Tiemann, whom he now slyly refers to as “my roommate.”

Apart from his pedagogical endeavors, Bob enjoys playing chess every Saturday with son Jim, a senior analyst at the Institute for Defense Analysis. Wednesdays are for tennis matches with friends he laughingly refers to as the “Geriatric Group.” Apparently they are healthy bunch: one member is a 94 year old retired psychiatrist. What spare time Bob has is devoted to engaging with his 15 grandchildren and 15 great-grandchildren. Two more great-grandkids are, as he puts it, “in the oven.” Bob proudly informed me that one grandson, Dustin, penned a New York Times bestseller, The Rule of Four, while he was in med school. Doesn’t surprise me one bit: Dustin obviously inherited those Thomason genes!

As I was leaving campus to interview Bob for this article, I happened to run into a member of the class of 1987, a Swarthmore graduate with a Ph.D. in clinical psychology. I told her I was about to have lunch with “Mr. Thomason,” wondering if she had taken any of his classes. “Are you kidding?” the alumna asked. “He taught me how to write! Please tell him I am eternally grateful.” I was not at all surprised by this typical Thomason accolade. So many of us in the Sidwell Friends community feel gratitude for what this extraordinary man has given us.