Hetty Alderfer: A Remembrance
by Zora Margolis and Peggy Kane 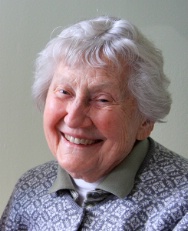 Henrietta (Hetty) Alderfer will be remembered by generations of Sidwell Friends students and teachers as a kind and loving teacher and colleague. Born Henrietta van Gelder on May 25, 1917 in Westfield New Jersey, she grew up in Westchester County, New York and Roanoke, Virginia and earned a Bachelor’s degree from the Philadelphia College of Art in 1940. Later Hetty lived with her parents on Sherrier Place in the Palisades in Washington, DC. Her parents then bought the house on Hutchins Place where Hetty and her husband Gordon later lived, from 1972 to 1996, and where Jonathan, her son, and his wife Zora live now.

Hetty met her future husband Gordon, a Pennsylvania historian and international development officer, in Washington—their first date was at the National Gallery. Hetty and Gordon were not birthright Quakers but became convinced. They were married at the Florida Ave. Friends Meeting in 1945. Gordon had come back to Washington following his stint in Glacier National Park as a conscientious objector during WW II and finished his conscientious objector service in DC. Gordon’s dedication to peace grew out of the generations of his family who had been Pennsylvania Dutch Mennonites, like the Quakers, members of a peace church.

Not long after Hetty and Gordon were married, they bought an old farm in Pennsylvania and lived there and briefly in Rosemont, Pennsylvania, a suburb of Philadelphia, where Hetty began to raise her three children—W. Henry Alderfer (Lauren) of Brattleboro, VT; Jonathan Alderfer (Zora) of Washington, DC; and Hannah Alderfer (Andrew Tyndall) of New York City. Eventually they moved to Long Island, New York when Gordon was named a vice-president of Care International. As committed pacifists, they helped found the Conscience Bay Friends Meeting,

On returning to Washington, DC Hetty became an active member of the Friendship Preparative Meeting at Sidwell Friends. A longtime resident of Washington DC, she taught generations of young children in pre-school and kindergarten classes at Sidwell Friends School from 1965 to 1985. Previously, she had been an art teacher at Sidwell Friends from 1940 to 1945. Not surprisingly, her son Jonathan and granddaughter Karly are both alumni—Jonathan graduated in 1967 and Karly in 2008.

Outside of school Hetty had a wide range of other interests. Throughout her life, she was an avid gardener and flower arranger, and an accomplished seamstress, illustrator, and calligrapher.

Her colleague Pam Selden recalls the days as a new and young teacher and mother at Sidwell when Hetty warmly welcomed her and made her feel valued. Tall and straight, Hetty ALWAYS moved quickly and seemed to be filled with boundless energy and enthusiasm, though she was not young then. Her room was interesting, alive and vital. When son Philip came for his Pre K admissions visit, Hetty took time to take a nervous and worried Pam aside to reassure her that all was well, not to worry. Pam will never forget her kind words. Denise Terry, a Sidwell parent and later a teacher there, recalls the loft that Hetty had built in her room to allow four year olds a place to climb, a perch from which to gain perspective, and a stage for Hetty’s many theatrical productions. Denise’s daughter Meagan, now a mother of two, though she has few clear memories of her four year old experiences, does remember how much she loved Mrs. Alderfer. Martha Hanson who worked with Hetty for several years commented,

I have a very vivid memory about when something quite wonderful happened in the Transition (4 year old) classroom when I was working part - time with Hetty. There was a youngster who was always having trouble being part of the group at playtime in the classroom or outside. He was always "out of it" no matter what the activity. One day he suggested at circle time that the class sing and dance to the music of Swan Lake, his favorite music. It was quite a surprise and Hetty and I didn't know how to organize this. But this youngster did!! He suggested some of the children in the classroom be the dancers and some singers. He told the children where to stand and where to move. Then we put the music on and everyone (without chaos) hummed along and danced to the music. It was a moment for all of us. I always felt that Hetty was a creative person who saw creativity in others.

Following her husband’s death in 1996, Hetty moved to Foulkeways Quaker Retirement Community in Gwynedd, PA to join her mother who was still living. There she was an active member of Gwynedd Friends Meeting. Her interest in art remained an important part of her life. Peggy Kane, another Sidwell teacher, recalls bumping into Hetty at an impressionist art exhibit in Philadelphia in 1998.

At age 94 Hetty died peacefully of congestive heart failure on July 17, 2011 with her three children by her side. She is also survived by granddaughters Daya, Sarah, and Karly Alderfer.