In Memory of Cynthia Parker
by Lila Hochberg and Anne Rigby 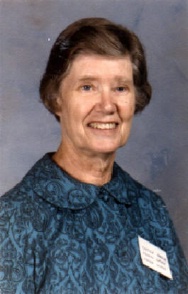 "You have Mrs. Parker? She's so strict!" The word was out. First day jitters intensified as students entered Cynthia Parker's classroom. Mrs. Parker stood in front of them - a tall, conservatively dressed woman with a serious expression - all somewhat foreboding to a nine year old.

Students soon learned that underneath that stern exterior and matter-of-fact approach to learning beat a very caring heart. Little did those students also know that they were entering into a partnership with a gifted teacher, who for twenty some years turned her classroom into a memorable learning experience.

Cynthia's philosophy was one of respect. She respected her students and expected them to respect her and each other. One never saw poor behavior in her classroom. No one would dare! She trusted her students to do their best and found many ways to encourage them. She helped them to develop self-confidence in their academic skills through her own brand of encouragement - matter-of-fact " you can certainly do it" approach.

But all was not hard work in Cynthia's room. Fridays were special days in her room, and the envy of the other fourth grades. After a hard morning work, the afternoon was turned over to stamp collecting and a junk food party. Cynthia, herself a stamp collector, made use of her hobby to teach geography. Combining stamps with food was a strategic triumph. A playful side to Cynthia was revealed in those happy Friday afternoons, but also in her enjoyment of the games and sports she shared with her students.

Cynthia's choice of a career in teaching was, in part, encouraged by an American University professor who had hired her as a curriculum research assistant. But it was Cynthia's great respect and admiration for her widowed mother, who became an accomplished teacher at age 50, that was pivotal in Cynthia's decision to follow the same professional route.

In her first job as a 5th grade teacher at the Potomac School, the principal encouraged Cynthia "to develop her own style" - and that she did! Her classroom style reflected qualities which grew out of a childhood where self sufficiency, self confidence and creative problem solving were necessary and valued, qualities which stood her in good stead through out her lifetime.

Cynthia's life in those early teaching years was not all work. She had always loved sports, learning to play paddle tennis in 1929. In Washington, she became an accomplished tennis player and continued to play regularly throughout her life.

In 1947, Cynthia married Bill Parker whom she met at a square dance. The two began their family in Virginia, where they lived for eleven years with their three children. Always active in community life, on one occasion, the Parkers were named Family of the Year by their neighborhood association.

The family's life changed in 1958 when Bill's job with USAID took them to Asia, where they lived in South Vietnam, Thailand, and Tokyo. In each place, Cynthia found work in education. In her written recollections, Cynthia writes about the challenges and joys of teaching in difficult situations.

One incident revealed her matter-of-fact approach to problem solving. In 1958, while teaching 6th grade in Vietnam, she was assigned to a makeshift Quonset hut classroom. The heat pouring down on the metal roof made the hut less tolerable for students and teacher alike. Cynthia's practical instincts created a solution for the heat problem, telling her students to wear bathing suits underneath their outer clothing which they could remove while inside the classroom. Cynthia followed suit, without getting the principal's permission. The children loved the plan. But one day a mischievous student set a fire in the hut and the class had to exit quickly in their bathing suits. Cynthia thought her days as a teacher might end at that moment, but instead heard the principal commend her for a creative heat survival maneuver.

In 1969, Cynthia returned to teaching and started her 24 years as a Sidwell Friends faculty member. Here, she used all of her past experiences to develop a rich curriculum and a caring environment. Cynthia had a clear cut view of how children learned. She was not swayed by new theories or fads but knew what needed to be taught, and sought ways to make her methods work for each and every student. She stripped away all that seemed superficial and stuck to the basics of a fourth grade curriculum. Middle School was a leap and she wanted them to be ready for it.

Cynthia's life was full during those Sidwell years. She and Bill loved going to the theater and art museums. She was a regular tennis player at the Edgemoor Club. Summer always was a time for travel and spending time with her three children and their families. But there were also sorrows. After a long illness, Cynthia's son died in the late '80's and in 1990, Bill died. Cynthia wrote that her husband's death left her feeling diminished. She had lost so much, but she continued to teach.

Cynthia had taught for more than half a century and all of those years were good ones. But the legacy that stayed with her students was her belief in their ability to achieve, enabling them to believe in themselves. . "Of course, you can do it!"

Other Tributes to Cynthia Parker

Al Hunt, former parent: excerpt from a column he wrote in the Wall Street Journal, May 28, 1992:

As the school year draws to a close, here's a good tip for how to improve education: Do whatever produces more Cynthia Parkers. Ms. Parker is a fourth grade teacher at the Sidwell Friends School in Washington, DC. She is retiring this year after four decades of teaching. At first blush, she hardly seems a model for our educational needs. She's 70 years old and teaches in a terrific Quaker school that has none of the ills afflicting inner-city, and some other, schools.

But the character and caring that she brings to what she considers the most important task imaginable - teaching - is the ideal model. For the past year, she has taught our ten-year-old son, Jeffrey. He has experienced the joys and tribulations of learning, and his parents have gained renewed appreciation for teaching.

Although generally blessed with good teachers, Jeffrey hasn't had an easy experience in school. In September, we worried how this frail-looking lady could deal with our tough-to-handle kid. It took only a week to learn that Cynthia Parker is as frail as cast iron and has more intellectual vitality than most 40-year-olds.

It was a constant struggle, but she has given Jeffrey a confidence, a sense of purpose and an appreciation of how much fun learning can be (as long as it's not math). When Jeffrey was insecure, she encouraged and gently prodded him. When he was defensive, she challenged: "Don't compare yourself with students who are at the bottom; compare yourself with students at the top. That's where you're capable of being." When he let up, she let him have it. "You are procrastinating, and that won't do." . . . This kid, who once told his parents that he was the dumbest kid in his class, now boasts that, if he is not the fastest reader in the class, he is the most voracious.

. . . It was the late astronaut - and teacher - Christa McAuliffe who said: "I touch the future: I teach." Today, that future looks brighter for at least one ten-year-old because of Cynthia Parker, a great teacher.

My son, Gardner Swan, '96, was taught by Cynthia Parker, one of his all-time favorites, in the fourth grade. She also taught me and some other parents a thing or two. Once, at parents' night, she told us the class was studying Ur. Not wanting to appear totally stupid, I kept quiet and didn't ask, "What in the world is Ur?" I went home, did my homework, and learned a great deal about Ur and the history of the whole Middle East, including its endless wars. Next time I saw Cynthia, I could discuss Ur, and the fact that wars are still going on. Unfortunately, now we are involved in one more.

I first met Cynthia in Japan in 1961 when our husbands were affiliated with the American Embassy in Tokyo. Our families were neighbors in the Embassy Compound housing. Two of Cynthia's children, Diana and Don, and all three of our children went to the Nichimachi School. This school was started for Japanese children whose parents wished them to learn English but also be prepared for the formidable Japanese exams to be taken at 11 years of age, but children of many nationalities attended. Tani Matzukata, the school director, planned the school along the lines of the Potomac School in Washington, DC where Cynthia's mother had taught for many years. Both Cynthia and I taught at this school. We and our children loved the school for its warm, caring atmosphere and individual attention. It was clear to me from the first moment of speaking about teaching with Cynthia that I was in the presence of a master teacher whose expertise and enthusiasm for teaching had carried her through many difficult situations in a variety of places. She took great pleasure in recounting her methods of dealing with children with learning difficulties or pursuing her high goals for her classroom in spite of a lack of supportive school structure. It was my privilege, much later at Sidwell Friends, to witness Cynthia in action. It was through her that I came to Sidwell as one of three teachers attempting to bring order and instruction to a classroom of forty fourth graders assembled together as part of the "open classroom" era. One teacher was there in the morning to teach English. I came in the afternoon to do the Social Studies program. And Cynthia was there all day - entrusted with the responsibility for math and the class organization. Each of us had our own styles, but Cynthia was our Rock of Gibraltar. Never one to bend to the latest educational winds, she held to her values of discipline, clarity, and excellence. Each child knew what Mrs. Parker expected of him or her in math and each one knew that she was there to help and explain and enlighten with endless patience. Even with the challenges and conflicts of this classroom, Cynthia and I became even better friends during that year. She was always a model of courage for me as she faced deteriorating eyesight, her husband's illness, and her son's death. No matter what was going in her personal life, she was always prepared, always cheerful, and always with the highest aspirations for every student. She gave me the gift of introducing me to many years of happy teaching at Sidwell and the gift of providing an example of a wonderful teacher who was eternally optimistic about the future for herself and her students. A note from her daughter Diana came at Christmastime saying how much she was missed. I miss her too. Her infrequent visits were always filled with long conversations about family and school and teaching. And so many times we dissolved in laughter recalling our days in the classroom. Thank you for this opportunity to recall memories of her.

My last memory of Cynthia, who by this time was in her 80's, dates from the week before her death. We were talking on the phone, and I asked, "So what are you up to?" (There was always something interesting). "Oh, I was down at the State House last week demonstrating for better health care for the poor,?"she replied. That was Cynthia!