In Memory of Eddie Wilamowski
by Louisa Schneiberg Hollman '80 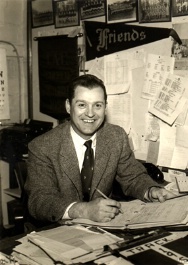 I only knew Eddie Wilamowski as the Middle School shop teacher. By the time I met him in the early 1970's, Mr. Wilamowski already had retired as athletic director and had stopped coaching boys' football, basketball, baseball and golf. I never knew of his legendary athletic exploits, except by reputation. I never had the opportunity to watch him coach or play. I never saw him on the athletic fields. I never knew the legions of boys he coached and who revered him. I knew him only as that special teacher on the bottom floor of the Middle School building who taught an eleven year old girl, one incapable even of successfully nailing two pieces of wood together, how to use the lathe to make a salad bowl.

Few teachers leave an indelible mark on their students, but Mr. Wilamowski did just that to decades of students at Sidwell Friends School from 1951 to 1982. My memories are unique in that my most vivid remembrances of my time with Mr. Wilamowski did not take place on the playing field, nor did they take place while hammering and sawing. I spent hours in the back office of the wood shop teaching him how to speak French. I have no idea how this activity came to pass -- but I remember with absolute clarity how I made workbooks and worksheets for him and left him with specific homework assignments every week. And he completed every one of them. I would come to the shop during free periods, correct his worksheets and teach him more French. I suspect that I imparted a lot of the wisdom and lessons of Monsieur et Madame Thibaut that I had learned from Madame Barcilon.

Several years later, I remember being crushed when I heard that the wood shop was being converted into a computer lab. I could remember Mr. Wilamowski, covered in sawdust, standing in his khakis and button-down flannel shirts among the large tables, jigsaws and lathes. He had a deep gruff voice but the personality of a teddy bear. I always admired his tenacity of purpose with me. There could have been no worse wood shop student. After two years in his class, he had me wearing plastic goggles and carving bowls with confidence on the lathe. It was a true miracle.

This winter I attended Mr. Wilamowski's funeral. I brought the salad bowl with me in a bag. I showed it to Dorothy Wilamowski when I entered the church. The wood from which I hewed the bowl is aged now. Burnished by years of use, it still glows from the regular oiling and polishing it enjoys, a testament to the single article that I was ever able to manufacture myself, under the watchful and loving eyes and careful supervision of Mr. Wilamowski. The glue has held for some thirty years now, bonding the wood planks just as I am bonded to Mr. Wilamowski by my cherished memories of him. What a testament to Mr. Wilamowski's staying power!

The saddest part of Mr. Wilamowski's funeral for me was the fact that I had never visited or tried to reach him for twenty-five years. I can't understand why I waited until he had passed away before thinking to reconnect with him. His funeral highlighted all of his wonderful attributes: He was a loving and committed husband for nearly sixty years; he was an incredible athlete who played college football at George Washington and was recruited by the Chicago Bears; he taught legions of Sidwell boys how to play football, basketball, baseball and golf; he was a fabulous uncle and sibling; and he loved his golf until the very end. He and Dot spent most of their final years together at their home in Florida. Mr. Wilamowski played golf every day and remained a competitor and a fighter until the day he died at 85.

Although the Wilamowskis had no children of their own, I suspect that many of his students shared my feeling of having a second father in Eddie. During my shop classes, our French lessons in his office and the numerous conversations we shared, Mr. Wilamowski and I developed a relationship that I will always treasure. It is a true testament to his versatility and talents that he is remembered for being so many different people: coach, teacher, surrogate parent and friend. What a powerful legacy he leaves behind in the thousands of students who benefited from his skillful coaching, his inspiring teaching and his abiding friendship. Que Dieu te garde, mon bon ami!

I came to Sidwell in 1953 from Hanover, New Hampshire -- a repeat of my junior year.

At that time, I did not know that I would be a professional sculptor. What I did know was that someone who is dyslexic could not learn in the same way as other classmates. My parents believed attending Sidwell might help get me through this reading and writing disorder. They wanted a new start for me, and longtime friends volunteered as surrogate parents. After the end of my first year at Sidwell, administrators said that if I wished to continue my studies and remain at Sidwell, I had one choice: to move into the home of Coach Eddie and Mrs. Dorothy Wilamowski.

Coach Eddie coached me in football and baseball in 1953-1954 and continued to coach me in 1954-1955. Coach Eddie and Mrs.Wilamowski created a stabilizing influence that I needed in order to get through my senior year. We had wonderful times together; serious talks were offset with joking. The Wilamowskis were warm people with life experiences they were willing to share. At the dinner table and driving to school, conversations took place that revealed character-building events, rough times and good times, and indirectly helped me find my way and put together my value structure. There was no pretense and what was important had real logic behind it. They had great dignity and humility.

Mrs. Wilamowski was a very good cook and Coach Eddie and I had terrific appetites. The Wilamowskis had a farm near Hagerstown that they would go to from time to time, and I accompanied them once. When we were looking in the pig-pen, Eddie said he thought we should name one of the pigs after me. We had a lot of fun with that while at the farm and on the way home. Time passed and one evening in the spring, some great pork chops showed up on my plate. Eddie asked how I liked them. I said how wonderful they tasted and then he told me they belonged to George, the pig. What a big laugh they got from the look on my face!

On the serious side of things, in a most natural and unassuming way, Coach Eddie and Dot Wilamowski were able to keep me from losing track of my priorities. My graduation from Sidwell was a proud moment in my life. I owe them both many thanks.

If seeing his work is of interest, please go to: www.ganthonisen.com

Taken from an article by Peter Donovan '66, written on the occasion on Eddie's retirement

Eddie Wilamowski arrived at Sidwell Friends in 1951 from the public school system to take a coaching job. He had been persuaded to make the change by his friend Albert Haringer who was already coaching at Sidwell. The famous "Pop" Wannan, Sr. was head of the athletic department, and the school competed in the Interstate Academic Conference. In those days Sidwell had a variety of playing fields, as the school owned the property across Wisconsin Avenue now occupied by Fannie Mae. Eddie coached football, baseball, basketball, and golf.

In 1960 Eddie became head of the athletic department but continued his coaching responsibilities. He had only two losing seasons in football and many exciting ones, beating both Landon and Georgetown Prep at various times. One of the most exciting, according to Peter who played for Eddie, was the 1964 Landon game that was won 14-13 by an end zone reception with no time remaining.

In 1966 Eddie took a sabbatical, at which time he and his wife Dot took an around-the-world tour. When they returned, he became the woodshop teacher in Middle School until his retirement.

Peter observed that, "Coach Wilamowski's first concern -- whether he was coaching football, baseball, basketball, or golf -- was always the development of the individual. He believed that participation in a team sport at the Middle and Upper School levels could help in that development. As a player and as a student, you knew that he was your friend."

In the late 1950's, with Coach Wilamowski as our leader, we won two IAC baseball championships. One of those years we had only ten boys on the team! It was a tribute to Coach that we could win with such a small squad and no depth. In part this was due to our "spring training" trips to Wintergarden, Florida, where we trained with the Washington Senators' farm team, the Chattanooga Lookouts. Dottie was always with us on those trips. We developed our skills and had a fabulous time doing it.

Eddie will always have a special place in my memories. I don't think that any of us who attended Friends in the 50s and 60s will ever forget him, and I am sure that he forever influenced all that came under his tutelage. I know he certainly influenced my life. I lived with Eddie and Dot my junior and senior years, and my wife, Nancy and I were fortunate to have them as friends throughout the many years that have passed all too quickly since that time. I knew Eddie as a coach, a mentor, and a great substitute father. Reflecting on what I have done since graduating from Friends, I only now am starting to realize how he prepared me for whatever I later accomplished. Although the phrase is greatly overused, the term "old school" truly describes Eddie. He believed in honestly, openness, and trust and imparted those traits to all of us who came in contact with him. He had a dry sense of humor. Sometimes you were not sure if he was kidding you or not, but you always found out. I remember being awakened by him one night to help unload a truckload of sausage that Dot's brother had brought up from their farm. After carrying the wrapped packages into the house, Eddie called, "Roland, wait. I have one more." He then climbed up into the bed of the truck and tossed a pig's head down into my arms and roared at my scream. Eddie was the person all of us should be lucky enough to know at least once in our lives. I believe I can speak for all that knew Eddie when I say that he will never be "gone" because a little bit of him is in all our lives. God Bless You, Eddie